U.S. Energy Secretary Rick Perry blasted proponents of the Green New Deal as “a bunch of kids who’ve never been on the playground before.”

“This is a bunch of kids who’ve never been on the playground before, they’ve never even been on the field of play before,” Perry told Kilmeade when asked about the plan. “They’re sitting on the sidelines and they’re saying, ‘Here’s what I can do. Let’s do this, zero emissions in 10 years. Alright let’s all go do that.’ Not having any idea the cost of that. The Green New Deal, $93 trillion dollars. Brian, this, on its face, makes it a fantasy …” 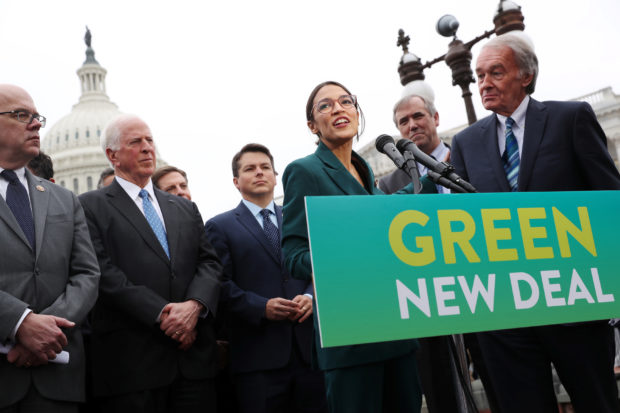 Many prominent Democratic politicians, including Democratic New York Rep. Alexandria Ocasio-Cortez and most 2020 presidential hopefuls, have come out in favor of the plan, which would overhaul the nation’s energy and economic policy to the tune of trillions of dollars. (RELATED: ‘Self-Inflicted Damage’: Rubio Rips Green New Deal)

While Democrats in favor of the plan see a looming crisis, Perry took a more optimistic approach.

“[T]he good news is America is reducing emissions,” he said. “Since the high of 1997 until 2017 you have our electric power industry in the United States reducing sulfur dioxide and nitrogen oxide by 99 and 76 percent. I mean, America is leading the world in emissions. Texas is now producing more renewable energy percentage-wise than the European Union. We ought to be getting celebrated instead of these cockamamie ideas that are coming out of left field and it seems like a bunch of kids that are [saying] ‘I’m gonna one-up you and come up with an even crazier idea!'”

Perry finished the segment with a call to expand the nation’s nuclear energy capabilities.

Listen to Perry’s comments below via The Brian Kilmeade Show.