Democratic Rep. Alexandria Ocasio-Cortez and her chief of staff Saikat Chakrabarti obtained majority control of Justice Democrats PAC in December 2017, according to archived copies of the group’s website, and the two appear to retain their control of the group, according to corporate filings obtained by The Daily Caller News Foundation. If the Federal Election Commission (FEC) finds that the New York Democrat’s campaign operated in affiliation with the PAC, which had raised more than $1.8 million before her June 2018 primary, it would open them up to “massive reporting violations, probably at least some illegal contribution violations exceeding the lawful limits,” former FEC commissioner Brad Smith said.

Ocasio-Cortez never disclosed to the FEC that she and Chakrabarti, who served as her campaign chair, controlled the PAC while it was simultaneously supporting her primary campaign, and former FEC commissioners say the arrangement could lead to multiple campaign finance violations. The group backed 12 Democrats during the 2018 midterms, but Ocasio-Cortez was the only one of those to win her general election.

And fellow former FEC commissioner Brad Smith told TheDCNF that if “a complaint were filed, I would think it would trigger a serious investigation.” He also noted that such a probe could potentially result in jail time for Ocasio-Cortez and her chief of staff, Chakrabarti.

Republican election attorney Charlie Spies told TheDCNF: “It looks like the campaign and PAC are under common control and the PAC was funding campaign staff and activities as an alter-ego of the campaign committee, which would be a blatant abuse of the PAC rules.”

Ocasio-Cortez and Chakrabarti could face prison if the FEC determines that they knowingly and willfully withheld their ties between the campaign and the political action committee from the FEC to bypass campaign contribution limits, according to Smith.

“At minimum, there’s a lot of smoke there, and if there are really only three board members and she and [Chakrabarti] are two of them, sure looks like you can see the blaze,” Smith, a Republican, told TheDCNF. “I don’t really see any way out of it.” 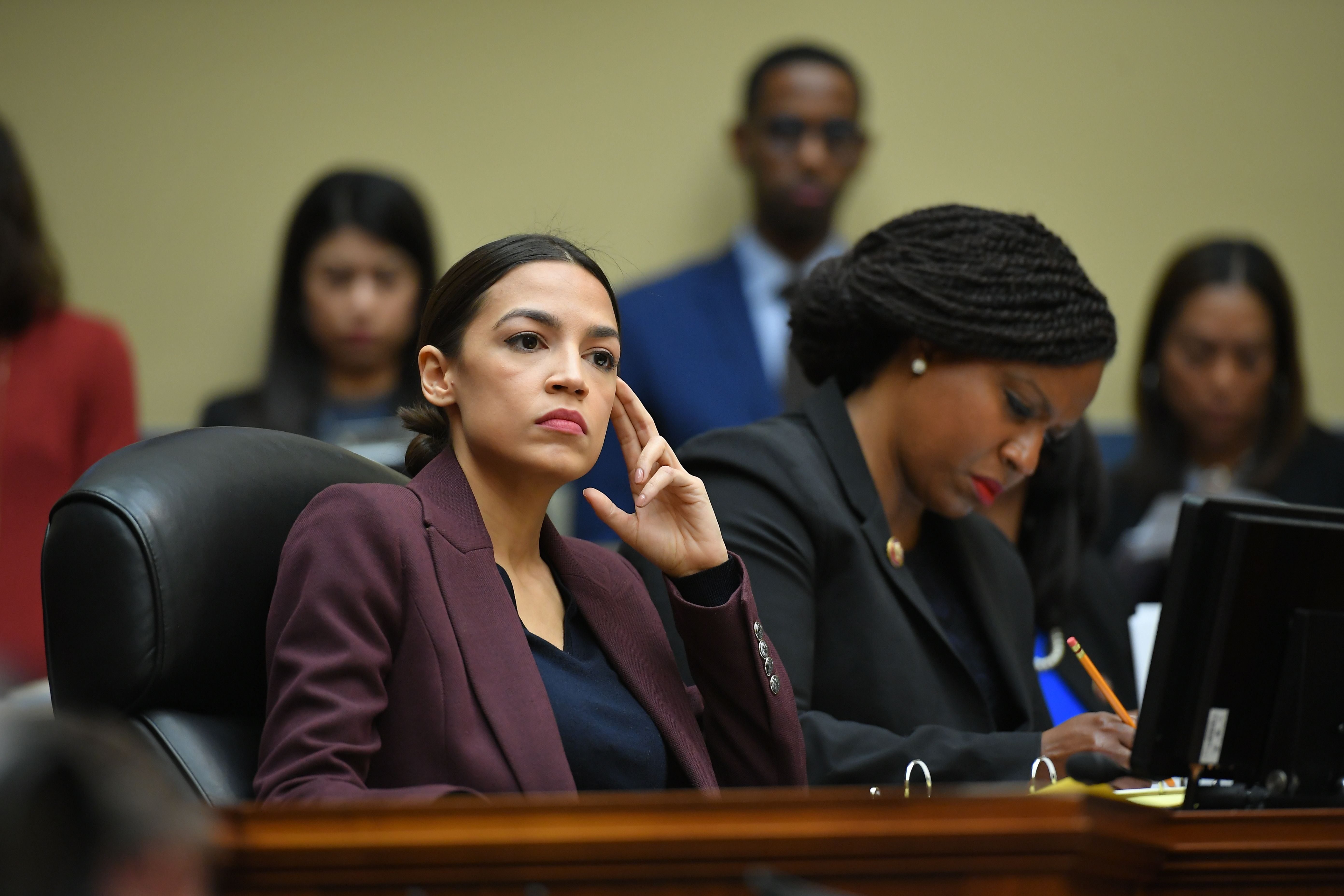 Justice Democrats stated on its website from December 2017 until two weeks after Ocasio-Cortez’s June 2018 primary victory that she and Chakrabarti held “legal control” of the PAC, and corporate filings obtained by TheDCNF show that the two still serve on the three-member board of Justice Democrats on paper.

Political committees are affiliated if they are “established, financed, maintained or controlled by … the same person or group of persons,” federal election law states.

Smith said: “The admission makes it open and shut if someone wants to file a complaint with the FEC. I don’t see how the FEC could not investigate that. We’ve even got their own statement on their website that they control the organization. I don’t see how you could avoid an investigation on that.”

And if the FEC concludes that Ocasio-Cortez’s campaign and Justice Democrats were operating as affiliated committees, “then anyone who contributed over $2,700 total to her campaign and the PAC would have made an excessive contribution,” which is a campaign finance violation, Smith told TheDCNF.

Ocasio-Cortez’s campaign and Justice Democrats raised a combined $4.6 million during the 2018 midterm election cycle, FEC records show. There’s a maximum five-year prison sentence for anyone who knowingly and willfully receives a collective $25,000 or more in excessive campaign contributions in a single calendar year.

Justice Democrats raked in far more than $25,000 from individual contributors of over $2,700 after Ocasio-Cortez and Chakrabarti took control, according to FEC records.

“If this were determined to be knowing and willful, they could be facing jail time,” Smith told TheDCNF. “Even if it’s not knowing and willful, it would be a clear civil violation of the act, which would require disgorgement of the contributions and civil penalties. I think they’ve got some real issues here.”

Spies, who served as legal counsel for Mitt Romney’s 2008 presidential campaign, said: “There are a bunch of well-funded groups on the left that file complaints on much thinner grounds than this against conservatives and Republican candidates. I hope that these so-called non-partisan groups file complaints and treat this with the same urgency that they would if it were a conservative candidate.”

Justice Democrats Went All In On Ocasio-Cortez’s Primary Campaign

Ocasio-Cortez credits Justice Democrats for recruiting her to run for Congress in May 2017. She tweeted that the group got her campaign up and running by helping “with all that stuff a normal person would need (what forms to fill out? etc).”

Ocasio-Cortez paid a combined $27,293 to Justice Democrats and to what was effectively its predecessor, Brand New Congress LLC, for administrative, staffing and overhead services from the time she declared her candidacy to her shock primary victory, according to FEC records. Ocasio-Cortez only began paying her staffers directly through her campaign beginning in March 2018, according to her campaign reports. (RELATED: Ocasio-Cortez Campaign Slapped With A Fine For Not Providing Proper Workers’ Comp)

Justice Democrats supported Ocasio-Cortez throughout her entire primary run. The group, which Ocasio-Cortez and Chakrabarti appear to have legally controlled for much of her campaign, had raised more than $1.8 million by the time she ousted incumbent Democrat Joe Crowley.

The other 11 candidates propped up by Justice Democrats lost their respective races, according to The New York Times.

Justice Democrats staffers said there were discussions to go all in for Ocasio-Cortez as early as June 2017.

Last year, when @_waleedshahid and I were at @justicedems, we lead a process to name our 2018 goals.

Goal number 1: to defeat at least one prominent establishment Democrat with a JD recruited candidate. Everyone agreed @Ocasio2018 was our best shot.

Justice Democrats’ goal was for one of its sponsored candidates to defeat the incumbent, co-founder Corbin Trent told The Washington Post in June 2018, and former Justice Democrats staffer Max Berger tweeted that they established that goal in 2017.

But the PAC was advertising that it sought to replace numerous Democratic members of Congress with progressives.

Ocasio-Cortez and Chakrabarti, who served in multiple leadership roles within her campaign including campaign manager, were serving on the board of the Justice Democrats as early as Dec. 2, 2017, according to an archived copy of the PAC’s website.

Justice Democrats’ board of directors on Dec 2, 2017. (Screenshot/Wayback Machine)

Cenk Uygur and Kyle Kulinski of The Young Turks network were also on PAC’s board in early December 2017, but Uygur was forced out of the organization Dec. 22, 2017, after what Chakrabarti called “extremely disturbing sexist and racist statements” Uygur made in the early 2000s were unearthed.

We are deeply disturbed by recent news regarding @cenkuygur & David Koller. Their language and conduct is horrifying and does not reflect our values at Justice Democrats. We would be hypocrites to not act immediately and ask for their resignation. Here is our official statement: pic.twitter.com/WYqawLtuGo

Kulinski announced on YouTube the following day that he was resigning from Justice Democrats due to the PAC’s “venomous” Twitter statement urging Uygur’s resignation. Kulinski said he had “strong disagreements with the staff” of Justice Democrats, but added that the PAC’s candidates had “nothing to do with this.”

Board members Ocasio-Cortez and Chakrabarti were left in control over Justice Democrats after Uygur and Kulinski’s departures, according to an archived version of its website saved on March 23, 2018, by the Internet Archive’s Wayback Machine.

Justice Democrats then reported that Ocasio-Cortez and Chakrabarti were “governors” of the organization in a document submitted to the Washington, D.C. Department of Consumer & Regulatory Affairs on March 28, 2018. A third listed governor was the PAC’s treasurer, Nasim Thompson. 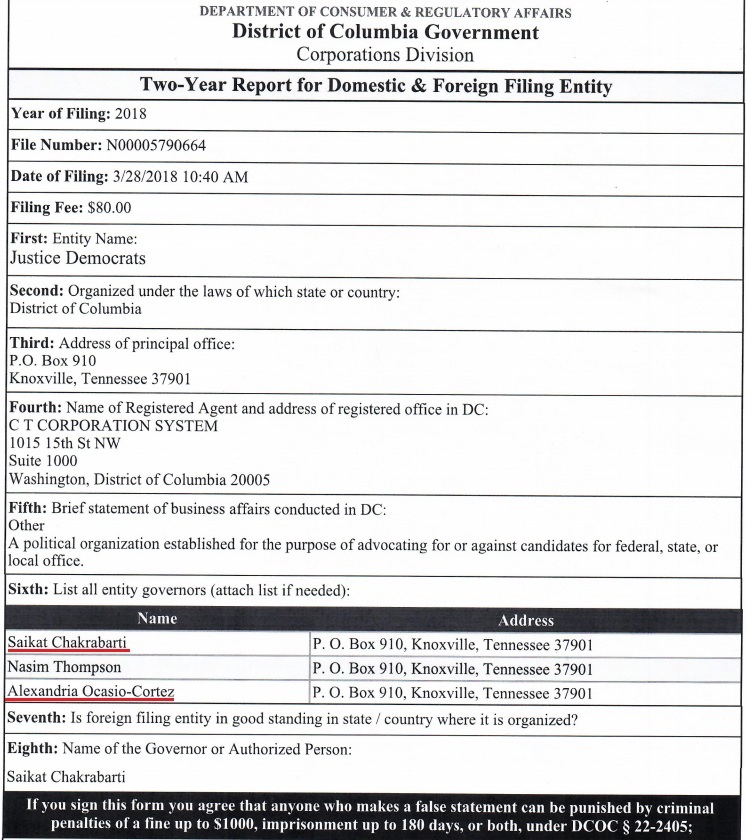 A governor of an organization incorporated in D.C. is any person “under whose authority the powers of an entity are exercised and under whose direction the activities and affairs of the entity are managed,” according to the D.C. Law Library.

The Justice Democrats’ website continued to state that Ocasio-Cortez and Chakrabarti held “legal control over the entity” for weeks after Ocasio-Cortez’s shock primary victory over Crowley on June 26, according to a July 10, 2018 archive of its website.

The Justice Democrats’ website currently states that Alexandra Rojas and Thompson hold legal control of the organization, but the PAC hasn’t filed documents to Washington, D.C. where it’s incorporated reflecting the change, meaning that Ocasio-Cortez and Chakrabarti currently retain majority control of Justice Democrats on paper.

Alexandria Ocasio-Cortez and Saikat Chakrabarti listed as governors of Justice Democrats on March 4, 2019, at 12:17 pm. (Screenshot/DCRA)

Politico reported Jan. 16 that Chakrabarti resigned from the board, and Justice Democrat’s website no longer listed Ocasio-Cortez as a board member as of Aug. 8, 2018. TheDCNF received the corporation filing document still showing both as governors on Feb. 25. The D.C. government website showed the same as of Monday afternoon.

Ocasio-Cortez’s office and Justice Democrats did not respond to multiple requests for comment.