In the middle of Michael Cohen’s private testimony to the House Intelligence Committee on Wednesday, CNN reported the former Trump fixer provided the panel with documents allegedly showing President Donald Trump’s attorneys edited false statements that Cohen made to Congress in 2017 regarding efforts to build a Trump Tower in Moscow.

The leak harkens back to another provided to CNN that led to an embarrassing retraction for the network.

CNN reported Dec. 8, 2017, during the middle of Donald Trump Jr.’s testimony that he had received an email Sept. 4, 2016, with a link of unreleased WikiLeaks documents. CNN had wall-to-wall coverage of the scoop, which would have been the first evidence that Trump associates received WikiLeaks materials before their release. (RELATED: CNN Botches Major ‘Bombshell’ Alleging Contacts Between Don Jr. And WikiLeaks)

But CNN got the story entirely wrong. The email was actually sent to Trump Jr. on Sept. 14, 2016, a day after the same WikiLeaks documents contained in the email had been released to the public.

It remains to be seen whether the CNN report during Cohen’s testimony will suffer a similar fate.

According to CNN’s anonymous sources, Cohen provided the House Intelligence Committee with documents that reportedly show edits that Trump attorney Jay Sekulow made to written testimony Cohen planned to give Congress in 2017. 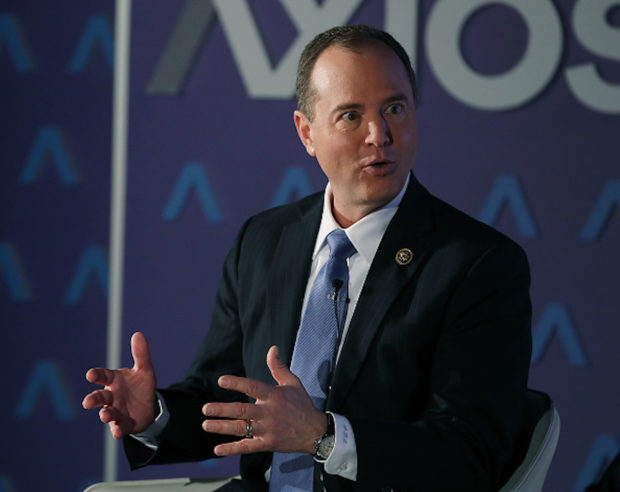 Rep. Adam Schiff speaks about President Donald Trump’s State of the Union address, during an interview with Mike Allen of Axios, on January 31, 2018 in Washington, DC. (Photo by Mark Wilson/Getty Images)

Cohen pleaded guilty Nov. 29 in the special counsel’s investigation to lying to Congress in 2017 about the extent of his efforts to secure a deal to build a Trump Tower in Moscow. Cohen testified that he negotiated through January 2016. In truth, Cohen worked through June 2016 on the project, which never materialized.

Cohen testified during a public House Oversight hearing Feb. 27 that Trump’s Russia legal team made edits to his 2017 testimony.

It is unclear what edits were allegedly made to Cohen’s testimony. But the implication of CNN’s report is that Trump’s lawyers potentially directed Cohen to lie to Congress.

But a source familiar with Cohen’s House Intel testimony tells TheDCNF there was nothing “nefarious” in the documents Cohen provided Wednesday.

“Documents show nothing nefarious at all. [The] January date for Trump Tower was in Cohen’s original draft and was not edited by lawyers,” said the source, who spoke on the condition of anonymity because of the sensitivity of Cohen’s testimony.

Sekulow pushed back heavily on Cohen’s claims in late February.

“Today’s testimony by Michael Cohen that attorneys for the President edited or changed his statement to Congress to alter the duration of the Trump Tower Moscow negotiations is completely false,” he said in a statement Feb. 27.

Sekulow did not respond to a request for comment about CNN’s report.

Cohen’s 2017 testimony has been the source of intense controversy in recent weeks because of a BuzzFeed report that Trump directed Cohen to lie to Congress about the duration of Trump Tower Moscow negotiations.

BuzzFeed reported Jan. 18 that Trump directed Cohen to lie to Congress about the timeline of the project.

The article led to widespread calls for Trump’s impeachment for potential obstruction of justice and suborning perjury. But in a rare on-the-record statement, the special counsel’s office said the BuzzFeed story was “not accurate.”

In his Oversight hearing, Cohen testified Trump did not “directly tell me to lie to Congress” but that he interpreted comments from Trump to be an instruction to lie.

“In conversations we had during the campaign, at the same time I was actively negotiating in Russia for him, he would look me in the eye and tell me there’s no business in Russia and then go out and lie to the American people by saying the same thing,” Cohen said.