Former Illinois Rep. Aaron Schock, a once-ascendant GOP heartthrob who used taxpayer money to elaborately decorate his office in the style of a TV show, will no longer face criminal charges after the Department of Justice took the case away from prosecutors in Springfield, Illinois, and moved it to Chicago in 2018.

The venue change came after indications of overreach by aggressive prosecutors. Investigators turned a Schock staffer into a mole and had him take documents from other staffers’ desks and secretly record the congressman. The House of Representatives’ institutional lawyer, Tom Hungar, said investigators’ conduct was likely illegal, unconstitutional and “amounts to a solicitation of that employee to steal official records.”

Prosecutors tried so hard to find out anything they could about Schock that they interviewed people who did not know him, defense attorney George J. Terwilliger III said. (RELATED: Ocasio-Cortez May Have Criminally Violated FEC Rules, Former Commissioner Says)

Investigators even questioned at least a dozen witnesses on “who he has slept with and whether he is gay,” Terwilliger said. “It is no secret that there has long been speculative gossip in the media about Mr. Schock’s sexual orientation. For no apparent reason, the government has felt itself compelled to investigation this too.” 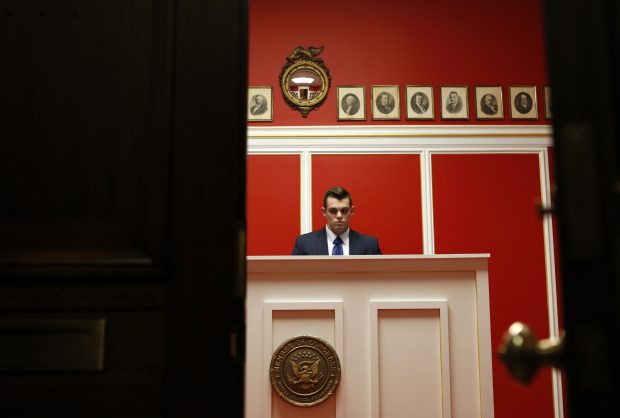 A staff member works at the office of Representative Aaron Schock (R-IL) on Capitol Hill in Washington March 17, 2015. Schock is resigning from Congress, U.S. House Speaker John Boehner said on Tuesday. Schock’s resignation follows news reports that raised questions about his use of taxpayer dollars. He did not notify any House Republican leaders before making his decision, a House Republican aide said. REUTERS/Yuri Gripas

Schock resigned in 2015 after a scandal involving him using taxpayer funds to elaborately decorate his office in the theme of the TV show “Downton Abbey.” The next year, under Springfield prosecutors, he was indicted on 24 felony counts. (RELATED: Check Out The Celebrity Lifestyle That Got Schock Indicted)

But Chicago prosecutors agreed to a deal Wednesday that settled the case in exchange for Schock reimbursing his campaign committees $68,000 for improperly billing expenses to them. Under the agreement, one of those now-defunct campaign organizations will plead guilty to a misdemeanor for record-keeping violations. Schock also agreed to pay unpaid taxes.

“I continue to ask where was the oversight and supervision when my indictment was initiated. It should not have taken four years, two U.S. Attorneys’ offices, three judges and millions of dollars in costs to the taxpayers and myself to come to this conclusion … This case should never have gone this far or this long,” Schock said in a statement.

“Mistakes were made in the handling of my campaign and congressional offices, and I have acknowledged responsibility for that. But mistakes are not crimes.” (RELATED: Schock Fined $10,000 To Settle FEC Case)

The Springfield prosecutors in 2016 said he received $139,000 in false mileage reimbursement after billing for 150,000 miles more than he drove — a discrepancy originally uncovered by Politico.

Prosecutors said he had a friend set up a front company called “Global Travel International,” then held an event in which constituent attendees paid the company for their costs. Schock later took $4,500 from that bank account, prosecutors said.

They also said he charged his campaign $8,000 for a private plane during a European vacation and falsified expense records to hide a $1,134-a-month car payment.

And it said he used campaign funds to buy event tickets, then sold them at higher prices and kept the profits personally.

In Wednesday’s agreement with Chicago prosecutors, Schock acknowledged conduct that seemed much drier.

He acknowledged reselling World Series and Super Bowl tickets at a $42,000 profit without reporting it on his taxes.

He also “acknowledges that at times his actions or inaction may have caused his campaign committees and the House to pay expenses that SCHOCK knew or should have known were not properly charged to those entities. For example … caused mileage reimbursement vouchers to be regularly submitted to the House and to his campaign committees without providing documentation of the number of miles he actually drove during the reimbursement periods. SCHOCK acknowledges that over time this process resulted in him receiving mileage reimbursements that exceeded the number of miles actually driven.”

Luke Rosiak, a Daily Caller News Foundation investigative reporter, is the author of the new book Obstruction of Justice: How the Deep State Risked National Security to Protect the Democrats. Follow Luke on Twitter. Send tips to luke@dailycallernewsfoundation.org.