A deployed father of six gave his youngest son, Luca, the surprise of a lifetime Monday.

U.S. Army Staff Sergeant Rob Cesternino, who had been serving a 10-month deployment with the Tennessee National Guard in Kuwait, Jordan, and southern Syria since May of 2018, arranged to surprise his nine-year-old son four days before he was expected home, WSMV News reports. Cesternino says he’s talked to Luca every two weeks since being deployed.

At Luca’s taekwondo practice session Monday night, the nine-year-old was told he would be sparring with three different instructors while blindfolded. What he didn’t know was that while he was sparring with the third instructor, his dad would jump in and take the instructor’s place.

When Cesternino entered the match, Luca continued to punch in the direction of his dad until Cesternino spoke and the realization suddenly came to him. In the video, Luca rips off his blindfold and throws his arms around Cesternino.

“You were such a big boy when I was gone. I’m so proud of you,” Cesternino told Luca, according to WSMV. “We don’t give enough thought to how tough it is on the families we leave behind.”

Cesternino’s five other children are older and live away from home. His oldest daughter’s enlistment in the U.S. Air Force ends in May. 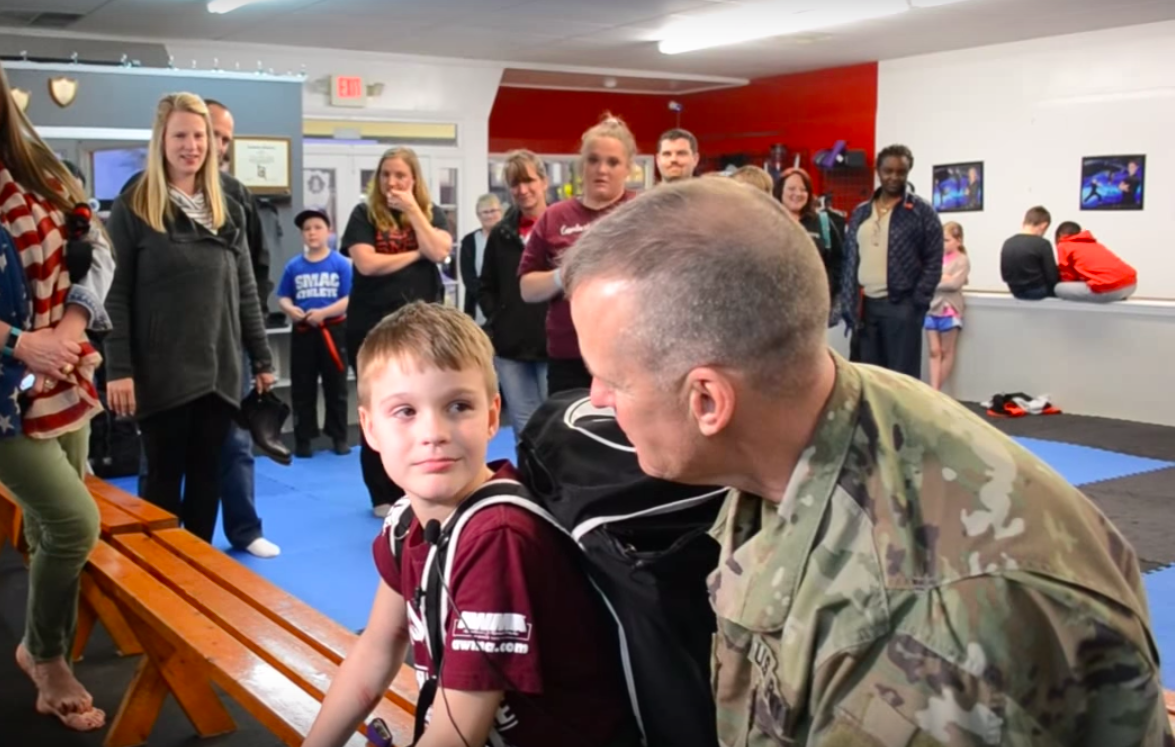 “She’s coming back home,” Cesternino said in a video by Lebanon Democrat. “She’s going to school in Knoxville [to] finish her degree.” Cesternino went on to explain that his daughter works in diagnostic imagery, or radiology, at Lackland Air Force Base in San Antonio, Texas. He also has a son who was in the Coast Guard and a son who was in the Navy.

“We’re a military family,” he continued. “My family has served every single generation dating back to WWI. It’s just expected in my family. I tell people the military’s a family business . . . . It’s just expected that you wear the uniform of your country. Again, you don’t have to make it a career. My oldest son wasn’t into picking up a rifle, so he joined the Coast Guard, and he learned to clean up oil spills. The service — it’s important.”