A 2012 Foreign Intelligence Surveillance Court motion contained a little-noticed provision expanding the FBI’s ability to share information with foreign officials, which could have laid the groundwork for abuses against U.S. citizens, Rep. Louie Gohmert said.

“This motion and order would allow the FBI to collude with foreign governments about U.S. citizens,” Gohmert, a Texas Republican on the House Judiciary Committee, told The Daily Caller News Foundation.

The potential for the U.S. government to spy on citizens — including for potentially political purposes — by partnering with foreign governments has come under renewed scrutiny following a pattern of Trump campaign associates being seemingly targeted abroad or by using their contacts with foreigners.

“The following underlined text will be inserted into the first sentence: ‘The FBI may disseminate FISA-acquired information concerning United States persons, which reasonably appears to be foreign intelligence information, is necessary to understand foreign intelligence information or assess its importance, or is evidence of a crime being disseminated for a law enforcement purpose, to foreign governments as follows,'” it says (emphasis theirs).

“There’s nothing they could obtain on American citizens that John Brennan or James Clapper couldn’t say ‘it helped me understand other intelligence,'” he continued, referring to the former directors of the CIA and of national intelligence, respectively.

“There is ever-mounting evidence that our ‘allies’ in the ‘Five-Eyes’ world were part of the conspiracy to destroy President Trump,” she said, referring to the intelligence alliance between the U.S., Australia, Canada, New Zealand and the U.K. “This amendment only exacerbates the likelihood of abuses.”

In September 2018, Trump ordered the “immediate declassification” of key documents that would illuminate the Russia probe — which ultimately found no collusion between the Trump campaign and Russia — but reversed himself days later. He said two unnamed countries, described as “very good allies,” called to express concern. The New York Times reported that the British government expressed “grave concern.”

I met with the DOJ concerning the declassification of various UNREDACTED documents. They agreed to release them but stated that so doing may have a perceived negative impact on the Russia probe. Also, key Allies’ called to ask not to release. Therefore, the Inspector General….. 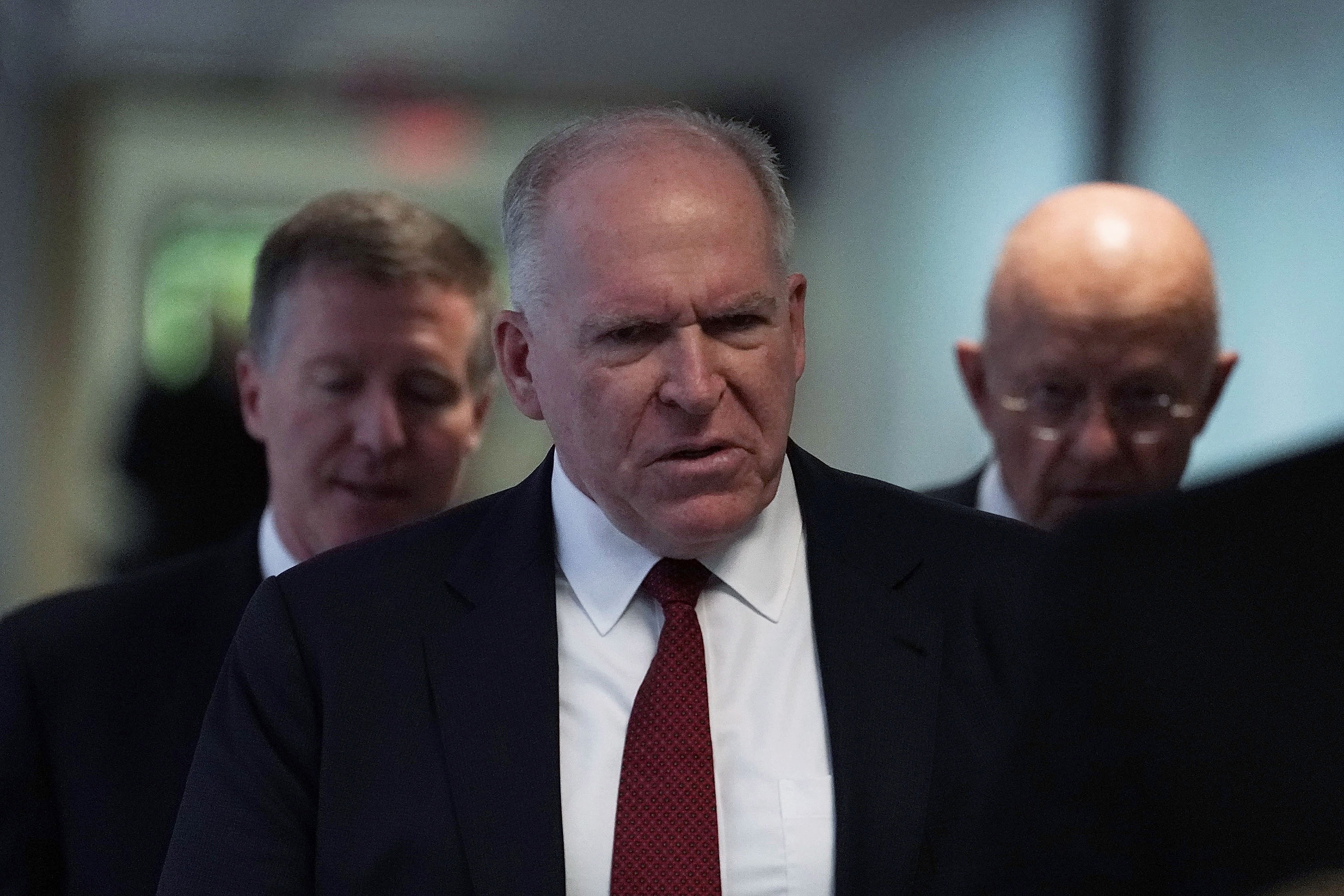 Foreign governments do not have the same restrictions on monitoring U.S. citizens as the Department of Justice does, since foreign governments are not beholden to the U.S. Constitution. Allowing a two-way exchange of information significantly expands the ability of the U.S. to work with other governments on topics dealing with Americans.

The 2012 motion, which was mostly declassified in 2015, also requested additional powers to share intelligence with foreign governments that are still unknown because the relevant portion was redacted.

“In addition, the following underlined text is inserted into Section IV.C.2: [redacted],” it said. “To facilitate the dissemination of evidence of a crime to foreign governments, the amendments permit FBI to [redacted].”

Gohmert railed against the document on the House floor on March 28, saying the secret nature of the years-old motion meant Congress didn’t know what it voted to reauthorize.

“I don’t know anyone that did know back in 2012 that our Obama Justice Department was throwing the door open with this vague and ambiguous language,” he said.

With special counsel Robert Mueller finding no collusion between the Trump campaign and Russia despite an aggressive monitoring effort, Republicans are now looking into the potential abuse of powers originally granted for anti-terrorism purposes to spy on Americans for political reasons.

Department of Justice officials used the Democrat-funded Steele dossier and a news article relying on the same source to obtain warrants under the Foreign Intelligence Surveillance Act (FISA).

“We now know FISA Court, at least one, perhaps more, courts were lied to … this basically a star chamber where the public is not allowed to know what went on,” Gohmert said.

One common theme emerges in the techniques that Obama-era DOJ officials used to gather information on Trump associates during the 2016 election: Operatives were seemingly repeatedly lured to foreign locations.

The Trump-Russia probe is said to have begun after an Australian diplomat told the FBI about a conversation with Trump campaign aide George Papadopoulos. Maltese professor Joseph Mifsud also made a cameo.

The author of the dossier used to obtain the FISA warrant was Christopher Steele, a former spy for the British intelligence service MI6.

An FBI agent who works at the U.S. Embassy in Rome and had a prior relationship with Steele was key in the probe’s early stages and traveled to London to get documents about Trump from Steele, The Epoch Times reported. Richard Dearlove, who served as head of MI6 when Steele worked there, advised Steele to, as The Washington Post reported, “work discreetly with” an unnamed “top British government official to pass along information [about Trump] to the FBI.”

In one FISA warrant used to spy on then-Trump foreign policy adviser Carter Page, the FBI wrote: “The FBI believes Page has been the subject of targeted recruitment by the Russian government.”

Gohmert said the broad language of the 2012 FISA motion — which also allowed the FBI to share more information with other federal and even local government agencies — expanded the potential to distribute information on Americans involved in politics.

Gohmert told TheDCNF: “I think it was a little deceptive to say this allows us to disseminate for law enforcement purposes when [there does not have to be] evidence of a crime. And to specifically permit the FBI to provide foreign officials — not law enforcement, it could include an ambassador — info necessary to ‘understand’ foreign intelligence.”

The language in the motion seems to suggest the U.S. would exchange intelligence with foreign countries, rather than simply providing information to other governments — at least that would be necessary for it to help the U.S. “understand foreign intelligence information” or “assess its importance,” as the motion says.

“We rely on friendly (or at least willing) foreign intelligence services to share with us information they get. They would not share with us if we did not share with them,” former prosecutor Andrew McCarthy told TheDCNF. He noted the U.S. has separate treaties with other countries, such as those belonging to “Five Eyes,” that could impose separate restrictions on monitoring the citizens of other members.

FISA Judge Mary McLaughlin ruled on May 18, 2012 on the motion and appeared to grant the DOJ’s requests.

“[T]he Court finds that the Proposed FBI SMPs and the NCTC SMPs, implemented in the manner described in the April 23, 2012 Submission … satisfy the definitions of ‘minimization procedures,'” she wrote.

Gohmert, a former judge, said the potentially key provision was buried. “On page 64 is the language they wanted inserted — that’s what they really want. Then you go back and you look at their argument in light of that,” he told TheDCNF.

The motion and court opinion’s rhetoric mainly deal with the implications of another power broadened by the memo: granting the FBI the ability to transmit unredacted data to other U.S. agencies, which are supposed to redact, or “minimize,” it before using it.

News coverage similarly focused on the sharing of unmasked data with other domestic agencies when the motion was first declassified.

The motion was co-authored — and classified — by then-Deputy Assistant Attorney General Tashina Gauhar, a career official who is still working in a key role at the DOJ under Trump.

DOJ spokesmen did not provide an on-the-record response for this story.

The revealing of U.S. citizens’ names that are supposed to be redacted in intelligence reports is known as “unmasking.”

When it emerged in early 2017 that Obama officials including former national security adviser Susan Rice made dozens of requests to unmask the identities of associates of Trump, it triggered an uproar. (RELATED: UNMASKED: Susan Rice Requested Intelligence On Trump Associates)

“We thought it was bad that they were unmasking so many American citizens to additional American officials, but now we find out they got authority to even share it with foreign governments without our approval,” Gohmert told TheDCNF.

“Why did they do this in 2012?” he said. “It seems like they were setting the stage for the FBI to become more politically operative. In what other places might it have been helpful?”

Luke Rosiak, a Daily Caller News Foundation investigative reporter, is the author of the new book “Obstruction of Justice: How the Deep State Risked National Security to Protect the Democrats.” Follow Luke on Twitter. Send tips to luke@dailycallernewsfoundation.org.