South Korea’s Constitutional Court ruled the country’s ban on abortion as unconstitutional Thursday and must revise the law by 2020, according to the Associated Press.

Under the current law that was passed in 1953, women who have abortions, except in cases of rape, incest and health risk, can face imprisonment and fines. Additionally, doctors who perform the operations can also face jail time for up to two years.

The review of the ban comes after a female doctor, who had performed around 70 abortions, challenged the law for endangering women and limiting their rights after being prosecuted. (RELATED: Ohio Legislature Sends Heartbeat Abortion Bill To Governor’s Desk) 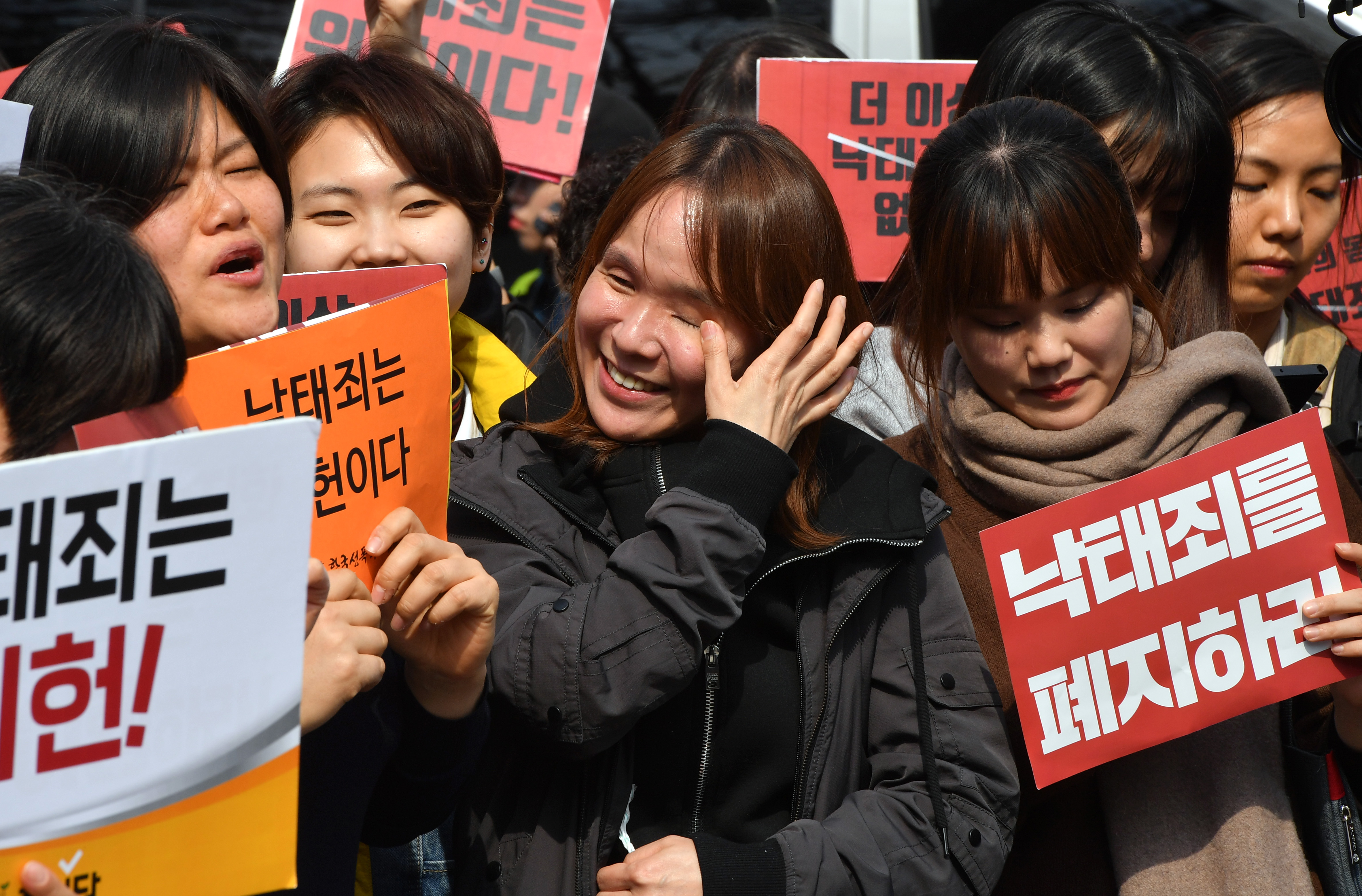 South Korean women’s rights activists react after the constitutional court’s ruling on decriminalization of abortion during a rally against the abortion ban outside the court in Seoul on April 11, 2019. (JUNG YEON-JE/AFP/Getty Images)

The nine-member court ruled seven-to-two against the ban, citing that it violates women’s rights to health and that the embryo is not a separate entity from the mother’s body.

“The abortion ban limits women’s rights to pursue their own destinies, and violates their rights to health by limiting their access to safe and timely procedures,” said the court in a statement. “Embryos completely depend on the mother’s body for their survival and development, so it cannot be concluded that they are separate, independent living beings entitled to the right to life.”

The ruling cannot be appealed, but the current law will remain in effect until it is revised. If the country’s parliament fails to edit the law by 2020, the legislation will be repealed altogether. (RELATED: Watch Abortion Survivors Tell Their Stories, Blast Late-Term Abortion Bills)

The decision comes amidst the growing tensions between South Korea’s growing movement for women’s rights and the traditional social conservativism within the country, where the Christian church is a big influence. Both sides gathered outside the court in anticipation for the historic decision on Thursday, with women hugging and cheering in response to the final ruling.

“Women deserve to be happy as much as we want to be today,” said activist Bae Bok-ju. “Today’s decision was made because countless women ceaselessly fought for their rights for so many years. We deserve the world’s attention and we deserve its recognition.”

Amnesty International’s East Asia Research Director Resean Rife said that the decision was “a major step forward for the human rights of women and girls in South Korea.”

However, the decision was also met with dismay from anti-abortion advocates, some of which had placards that had images of fetuses and messages saying, “Who can speak for me?” and, “Don’t kill me, please.” 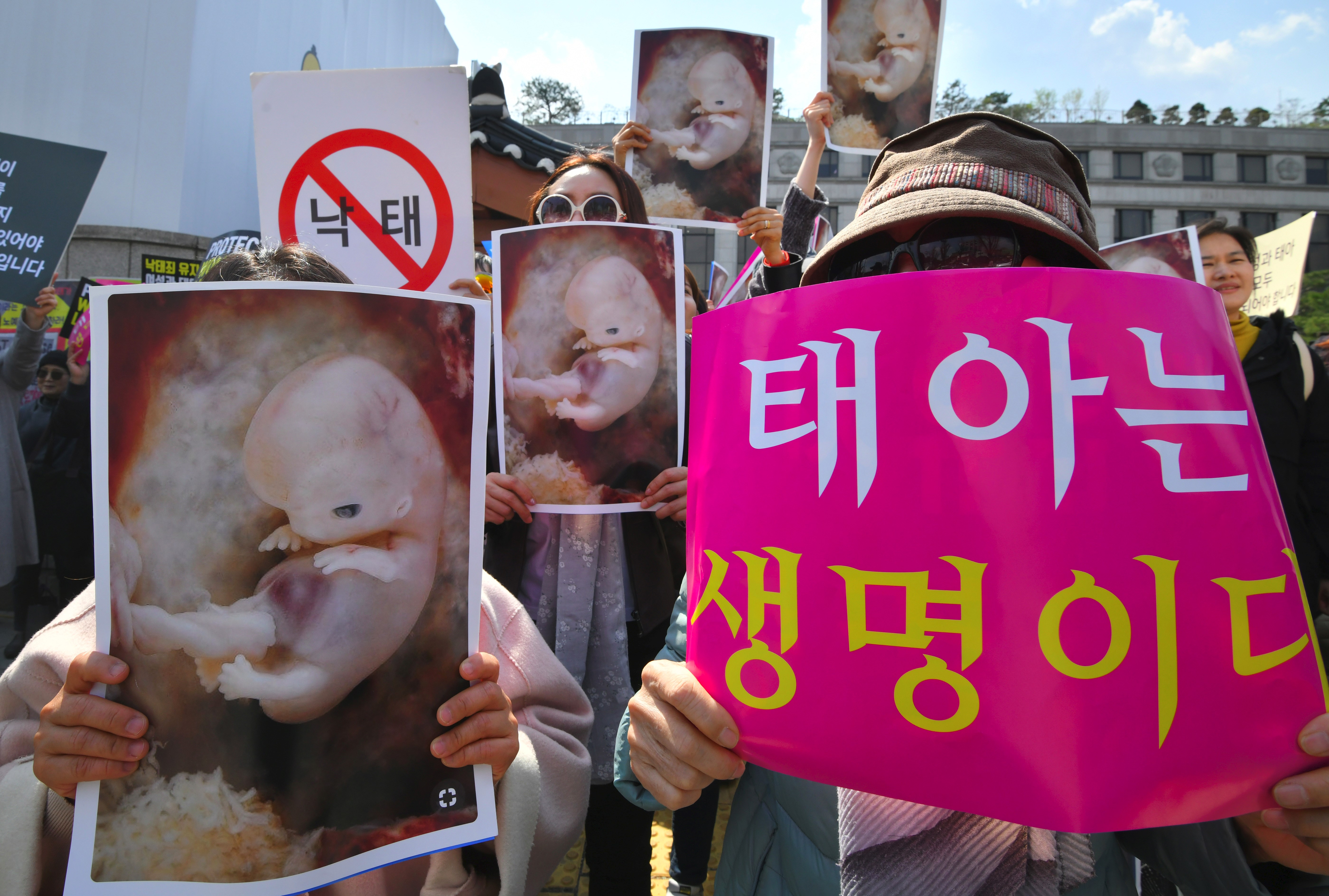 In the ban’s 66-year history, authorities reportedly tolerated illegal terminations for decades but started enforcing the law more in response to the country’s low birth rate. Even so, data shows that there have been only 15 indictments for abortion every year since 2015. (RELATED: Abortion Services In Nashville Double In One Week)

It is unclear how many abortions take place in South Korea, however, the country’s health and welfare ministry estimated that about 169,000 illegal operations were performed in 2010. Yet researchers say that the number could be as high as 500,000 in 2016.