American Muslims for Palestine (AMP) hosted the annual advocacy and training event, which was open to all adults who “seek justice in Palestine.” Additional criteria for participation includes supporting the Boycott, Divestment and Sanctions (BDS) movement, which seeks to punish Israel by economically depriving the country for its alleged mistreatment of Palestinians living in the Gaza Strip and West Bank.

The Anti-Defamation League (ADL) describes the BDS movement as “the most prominent effort to undermine Israel’s existence” and has further criticized AMP for promoting anti-Semitism under the guise of educating Americans. AMP hailed the ADL’s anti-Israel description of its organization.

Tlaib spoke to AMP on April 8 where she told the group that she feels “more Palestinian” when she is in Congress than she does elsewhere, according to The Investigative Project On Terrorism, who first reported on the meeting.

AMP’s New Jersey chapter posted a photograph of Tlaib outside of her office with some of its members during the event, including Joe Catron, an avowed supporter of multiple Palestinian terrorist organizations. (RELATED: America’s First Two Muslim Congresswomen Will Both Be Fundraising For Hamas-Linked Organization) 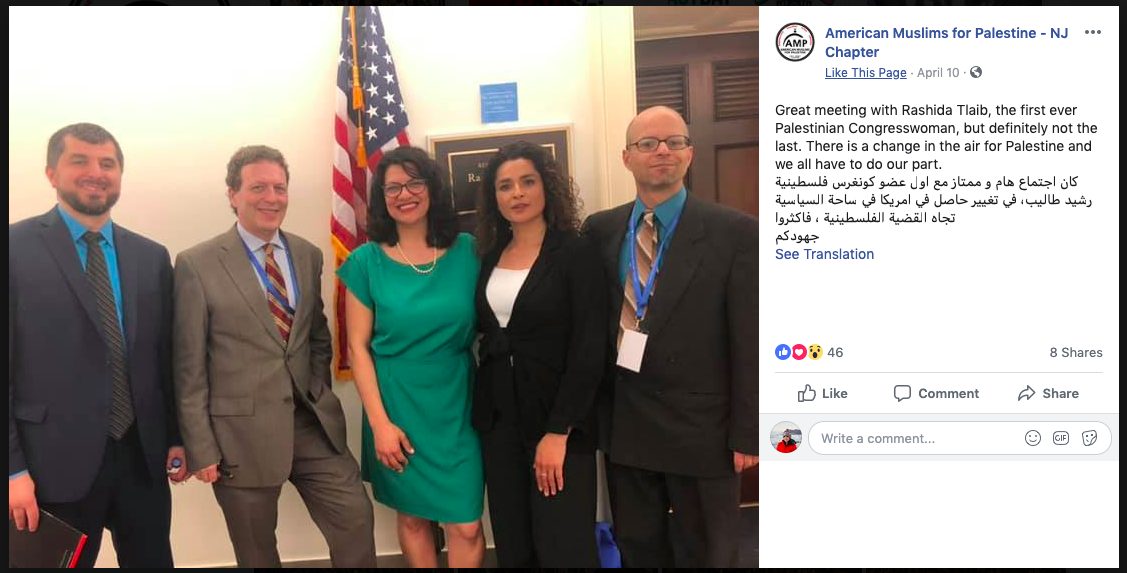 “A tip of my hat to Rashida Tlaib, who really goes above and beyond the call of duty in welcoming every supporter of Palestine to her office, listening to what we have to say, answering our questions, and posing for endless pictures,” Catron wrote on Facebook following the meeting. 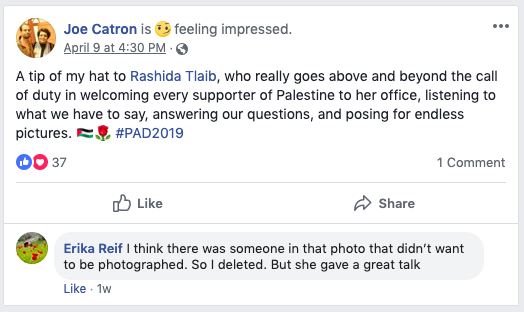 Catron is a long-time extreme anti-Israel activist and has openly supported terrorist organizations. He serves as the U.S. coordinator of Samidoun, the Palestinian Prisoner Solidarity Network. Samidoun is an affiliate arm of the Popular Front for the Liberation of Palestine (PFLP), a Palestinian Marxist–Leninist and revolutionary socialist organization. The United States designated PFLP a terrorist organization in 1997, and Australia, Japan, Canada and the European Union shortly followed suit.

Catron’s cover photo on both of his personal Twitter and Facebook accounts is a montage of a PFLP fighter donned in the organization’s official logo, as well as rockets and soldiers pointed towards a target over the state of Israel. It also displays the Arabic phrase “If you do [more attacks on Gaza] we will do [as well], hell is waiting for you.” The phrase is attributed to Mohammad Deif, the supreme military commander of Izz ad-Din al-Qassam Brigades, Hamas’s military wing.

Moreover, the feature image on his social media accounts are of himself posed alongside Leila Khaled, a member of PFLP who is a known Palestinian terrorist most notable for hijacking airplanes.

After PFLP murdered an Israeli policewoman in 2017 during a terrorist attack in Jerusalem, Catron posted PFLP’s official statement on his social media and referred to the event as “heroic.” The attack was described by the PFLP as a “blood oath” to Palestinians, and the organization echoed the Hamas war cry to eradicate Israel.

Statement by the PFLP on the heroic “Promise of al-Buraq” operation https://t.co/JIwp38BZg6 pic.twitter.com/CEAF6t8rqb

Catron has voiced his support and admiration for Hezbollah, simply stating on Feb. 8, 2019 “I [love] Hizbullah.” He also urged Hassan Nasrallah, the leader of the Islamic-terrorist organization, to fire rockets at Israel.

I’ve apparently blocked or been blocked by Nadim, as I can’t see the thing to which you two are responding, but in any case, I ♡ Hizbullah.

“Nasrallah, ya habib: udrub, udrub Tel Abib,” he tweeted in 2015, which translates into “Nasrallah, my dear: strike, strike Tel-Aviv.”

In addition to supporting PFLP and Hezbollah, Catron has also be an advocate for the Sunni-Islamist fundamentalist and terrorist organization Hamas. In 2014, Catron was a participant in a press conference alongside Tawfiq Abu Naim, the head of Hamas-run security forces in Gaza. The press conference was to support Palestinian prisoners, according to The Gaza Scoop.

“I celebrate with all who resist,” Catron later said on Facebook in celebration of Hamas’ 31st anniversary. (RELATED: Rashida Tlaib’s Ties To Anti-Semitism Run Deeper Than Previously Known)

Tlaib, along with fellow Democratic Rep. Ilhan Omar of Minnesota, became America’s first Muslim congresswomen when sworn into office in January. Their time in office has been embroiled in allegations of anti-Semitism.

Tlaib invited pro-Hezbollah, anti-Israel activist Abbas Hamideh to her swearing-in ceremony and the following private dinner in January. She is also a member of multiple anti-Semitic social media groups, including the Facebook group “Palestinian American Congress,” where members frequently demonize Jews and Israel. The founder of the aforementioned Facebook group, Maher Abdel-qader, is a Palestinian activist and was a key fundraiser for Tlaib’s 2018 congressional campaign.

Shortly after Tlaib was sworn into office, an op-ed column she wrote in 2006 for Final Call, a Nation of Islam publication founded by Louis Farrakhan, surfaced. She also has come under scrutiny for having ties to other anti-Israel individuals and for questioning the loyalty of Republican lawmakers who support the Jewish nation-state

Neither American Muslims for Palestine nor Tlaib’s office responded to The Daily Caller News Foundation’s request for comment.