“Well, certainly, Tiger was more heartfelt and more emotional than Donald Trump, who I think—he didn’t skip even one sentence of the Wikipedia entry on Tiger Woods,” Brennan stated. “My goodness, that went on forever. You can see Donald Trump wants to attach himself to Tiger Woods. That’s what I think this was about. The other part of this whole thing is that when you think about golf and you think about these two men linked together, this was just kind of a ‘bro event,’ almost like a 19th hole without the alcohol.” 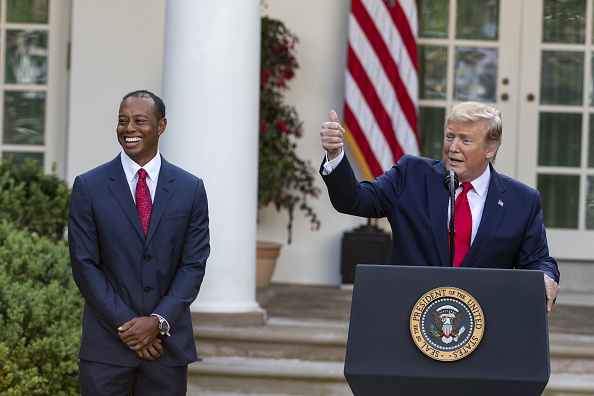 U.S. President Donald Trump, right, speaks as Tiger Woods, professional golfer and co-founder of the Tiger Woods Foundation, smiles during a Presidential Medal of Freedom ceremony in the Rose Garden of the White House in Washington, D.C., U.S., on Monday, May 6, 2019. Photographer: Alex Edelman/Bloomberg via Getty Images

She continued, “In the sense that is just talking golf. And that’s okay. That’s what it was, but let’s not make it more than it was. It was all about golf and Trump attaching himself to Tiger Woods.”

Trump honored Woods a month after he won the Masters Tournament, his 15th major title, but first one since 2008. Woods’ latest victory came after years of personal and physical struggles that saw him fall from the top of the golfing world. (RELATED: Trump Golfs With Tiger Woods, Jack Nicklaus In Florida)

Woods was the fourth golfer to be awarded with a Presidential Medal of Honor. The three other golfers who have received the award are Arnold Palmer, Jack Nicklaus and Charlie Sifford.