Wallace brought up the newest poll conducted by Quinnipiac, released Wednesday, which looked at how each candidate would fare against Trump in the Keystone State.

Not every Democratic candidate she mentioned beat Trump in a head-to-head, however. He was tied with California Sen. Kamala Harris, both with 45%, and he beat former Texas Rep. Beto O’Rourke by 2%, proving Wallace’s inaccurate claim. (RELATED: MSNBC’s Nicolle Wallace: ‘There Isn’t A Strain Of Racism On The Left’) 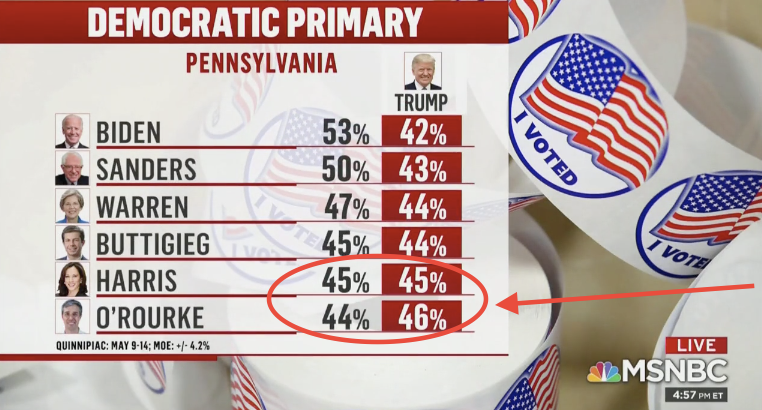 MSNBC’s Nicolle Wallace misrepresents this part of Quinnipiac’s most recent poll (Screenshot taken from her show 5:15)

“Well, I mean, I think we also have to realize that any woman who—let’s just say Senator Harris or Senator Warren—is at top of the ticket. We know that this particular president cannot deal with women. He literally shakes. He’s not too great with women of color, especially if you see how he deals with journalists,” Fordham professor and MSNBC guest Christina Greer responded. “So we know that already Biden has a little bit of real estate in Trump’s head. But unfortunately, Elizabeth Warren had that misstep with the Native American ancestry.”