Christians in Iraq continue to be exposed to violent attacks and oppression at the hands of various armed groups.

On May 13, assailants broke into an Assyrian Christian home and attacked two elderly women, a mother and daughter, in the Iraqi town of Bartella. The women were repeatedly stabbed with a knife and their gold and money were stolen. The two victims were then hospitalized in Mosul. The daughter, who sustained a violent head injury, remains in critical condition.

Two men who were arrested for the crime are from Shabak, a Shia group that is supported by Iran alongside the Shia Hashd al-Shaabi militia, reported the human rights organization, International Christian Concern (ICC).

Bartella is a town in the Nineveh plain in Iraq, the ancient Assyrian heartland, where Assyrian Christians still constitute a demographic majority and have for years sought autonomy or self-governance. However, since the defeat of ISIS, Bartella has been occupied by the Brigade 30 militia under the Hashd al-Shaabi. And the number of Shia Shabak people is increasing in the southern towns of Nineveh.

Susan Patto, an Assyrian living in Baghdad, told the Daily Caller, “the attack on those elderly women is not just a crime of theft; it’s a message to Assyrians that you are not safe in your homes and towns.”

“The fragile security situation in Nineveh Plain, where different sides control security, and most of them are not even people of that area, is creating more problems, and also increasing the fear of people to go back to their towns,” Patto added. 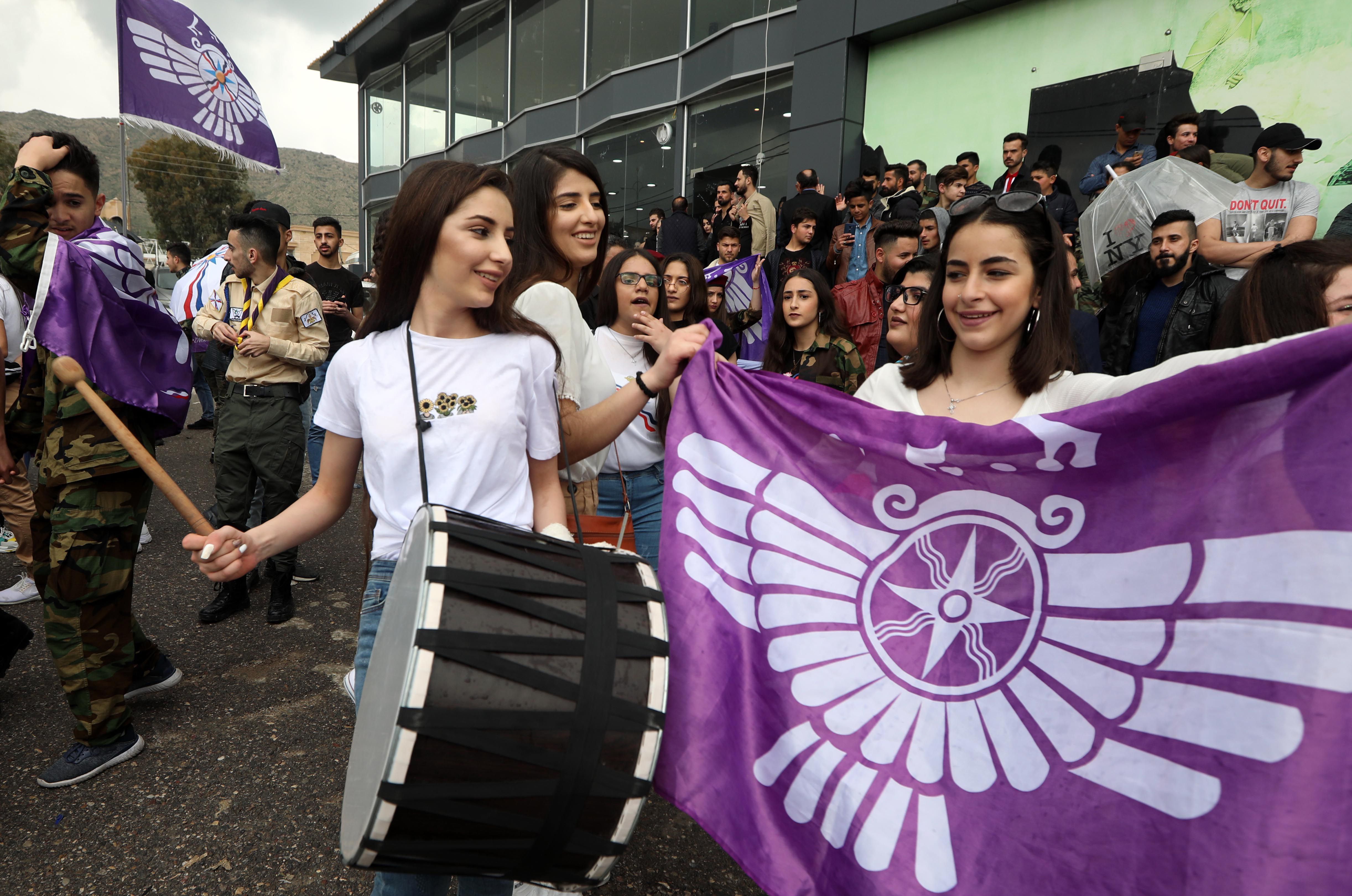 Iraqi Christian Assyrians hold the Assyrian Democratic Movement (Zowaa) flag, as they celebrate their New Year (Aketo), in the Kurdish city of Dohuk, some 430 km (260 miles) northwest of the Iraqi capital Baghdad, on April 1, 2019. (Photo by SAFIN HAMID/AFP/Getty Images)

“There is also the problem of rebuilding what was destroyed; it’s not going as it should be. People are not compensated for what they have lost, and there are no decent houses to live in, no infrastructure, and no jobs, and these are massive obstacles for people to go back. So the most urgent concerns of Christians are security and the rebuilding of their towns.” (RELATED: ISIS Destroyed Jonah’s Tomb But Inadvertently Unearthed More Biblical Evidence)

The Assyrians, who are the descendants of the original inhabitants of ancient Assyria, have lived in the Middle East for millennia and are indigenous to Iraq, Syria, Iran and Turkey. The Assyrian language they speak, which is also known as Aramaic, Syriac or Neo-Aramaic, was the mother tongue of Jesus.

Ancient Assyrian civilization made an enormous contribution to the history and culture of the region. For instance, ancient Assyrians developed mathematical inventions and sophisticated medicine which influenced science as far away as Greece.

Since the rise of Islam in the seventh century, however, Assyrians and other Christians became “dhimmis,” or second-class subjects. Yet, there remained sizable Assyrian communities for centuries afterwards, even under the Ottoman Empire. This changed dramatically with the Assyrian genocide that took place in Ottoman Turkey from 1915 to 1923, in which “300,000 Assyrians were murdered and innumerable women were abducted,” writes the author Mardean Isaac.

Even so, the murder of Assyrians did not come to a halt either in Turkey or in Iraq after the genocide came to a halt. According to a 2017 report by the Assyrian Confederation of Europe, “Assyrians represent one of the most consistently targeted communities in Iraq throughout its modern history. This has included the state-sanctioned massacre at Simele in 1933; Saddam Hussein’s Anfal campaign, which included the targeting of Assyrians villages; ruthless campaigns of terror to which Christians were subjected following the U.S. invasion in 2003; and finally, the recent tragic chapter authored by the Islamic State (IS) jihadist organization.”

The exodus of Christians from Iraq has been going on for decades. According to a 2016 report by the European Union and various international human rights groups, “Prior to June 2014, some two-thirds of the pre-2003 Iraqi Christian community – thought to number between 800,000 and 1.4 million – had already left the country.”

And when ISIS occupied the Assyrian-majority Nineveh in 2014, they gave Christians in the area an ultimatum: convert to Islam, pay the discriminatory “protective” jizya tax or be put to death. Hundreds of thousands of Iraqi Assyrians were forced to flee as a result. Thereafter, ISIS attempted to systematically eradicate the Assyrian cultural and historical heritage, destroying many Assyrian artifacts in the process. In 2015, for instance, the terror group obliterated and looted large parts of the ancient Assyrian city of Nimrud. (RELATED: Christian Genocide In Iraq: The Patriarch’s Plea) 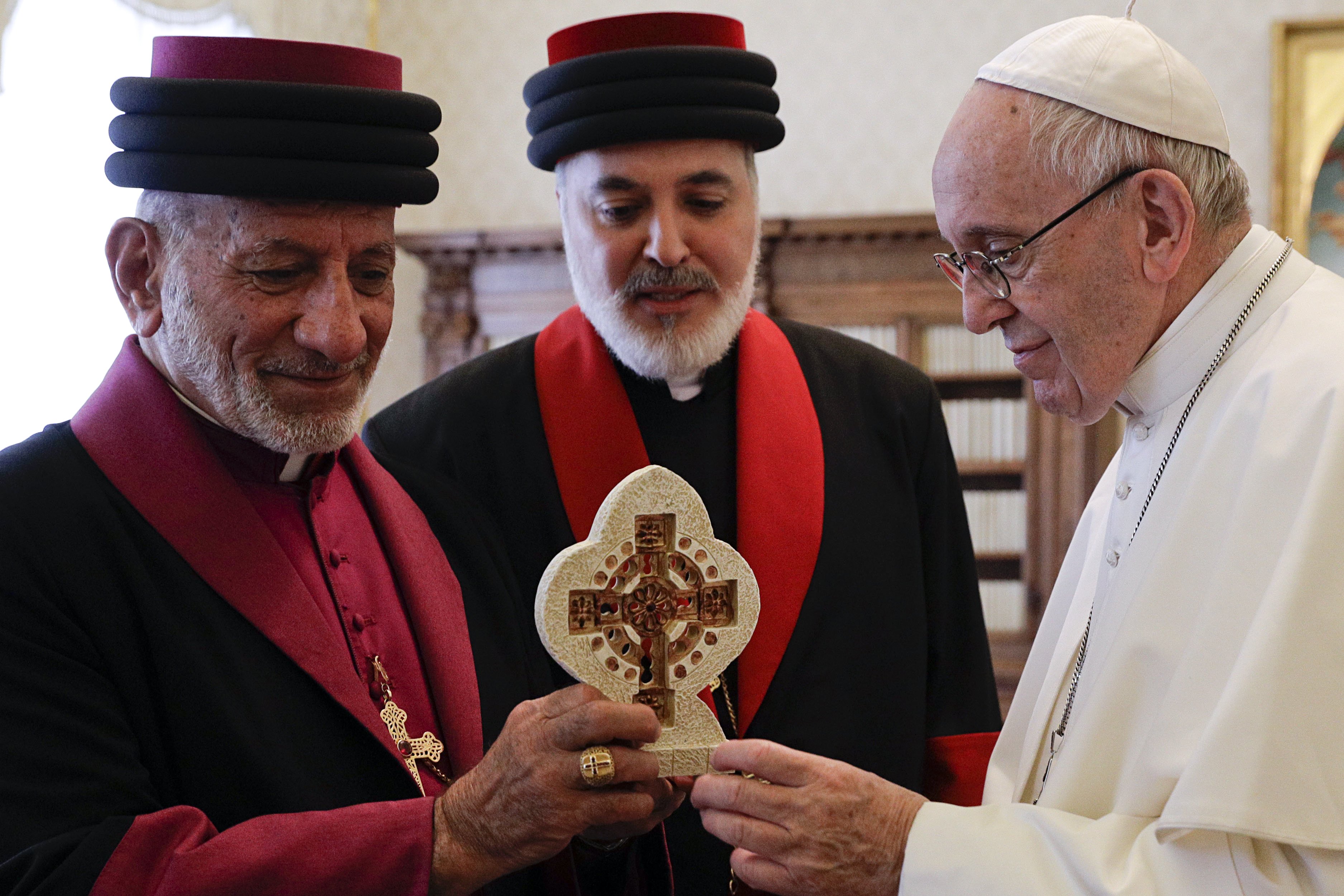 Pope Francis (R) meets Catholicos-Patriarch of the Assyrian Church of the East Mar Gewargis III (L) during a private audience at the Vatican on November 9, 2018. (Photo by Gregorio Borgia/AFP/Getty Images)

Now that ISIS-occupied areas in Iraq have virtually all been liberated, Assyrians and other Christians in Iraq are confronted with new challenges. According to the 2019 report “Struggling to Breathe: the Systematic Repression of Assyrians” by the Assyrian Confederation of Europe, Assyrians continue to face both violent and political threats. Many who fled ISIS have not been able to return, and Assyrian property has in the meantime been occupied and even sold.

Their continued plight is largely due to the fact that the Assyrians have been ignored by the international community and promises of self-rule denied by the governments or regimes that rule them, leaving Assyrians to subsist in an extremely violent region. For instance, after the U.S.-led military intervention in Iraq, Arabic and Kurdish were made the two official languages of the country while the Assyrian language was ignored.

Sadly, the Assyrian efforts for self-governance in Iraq have been fruitless even as they continue to be subject to constant pressure and violence at the hands of the Iraqi government, Kurdish authorities as well as various Sunni and Shia extremist groups.

Reine Hanna, the Director of the Assyrian Policy Institute (API), told the Daily Caller, “since 2003, Assyrians in Iraq have consistently pushed for the creation of a self-administered governorate in the Nineveh Plain as a way to prevent the ethnic cleansing of their community that quickly followed. Unfortunately, they have faced insurmountable challenges over the years, given that they lack power and the credible threat of force — relying instead on the development and respect for the rule of law to achieve their rights.” 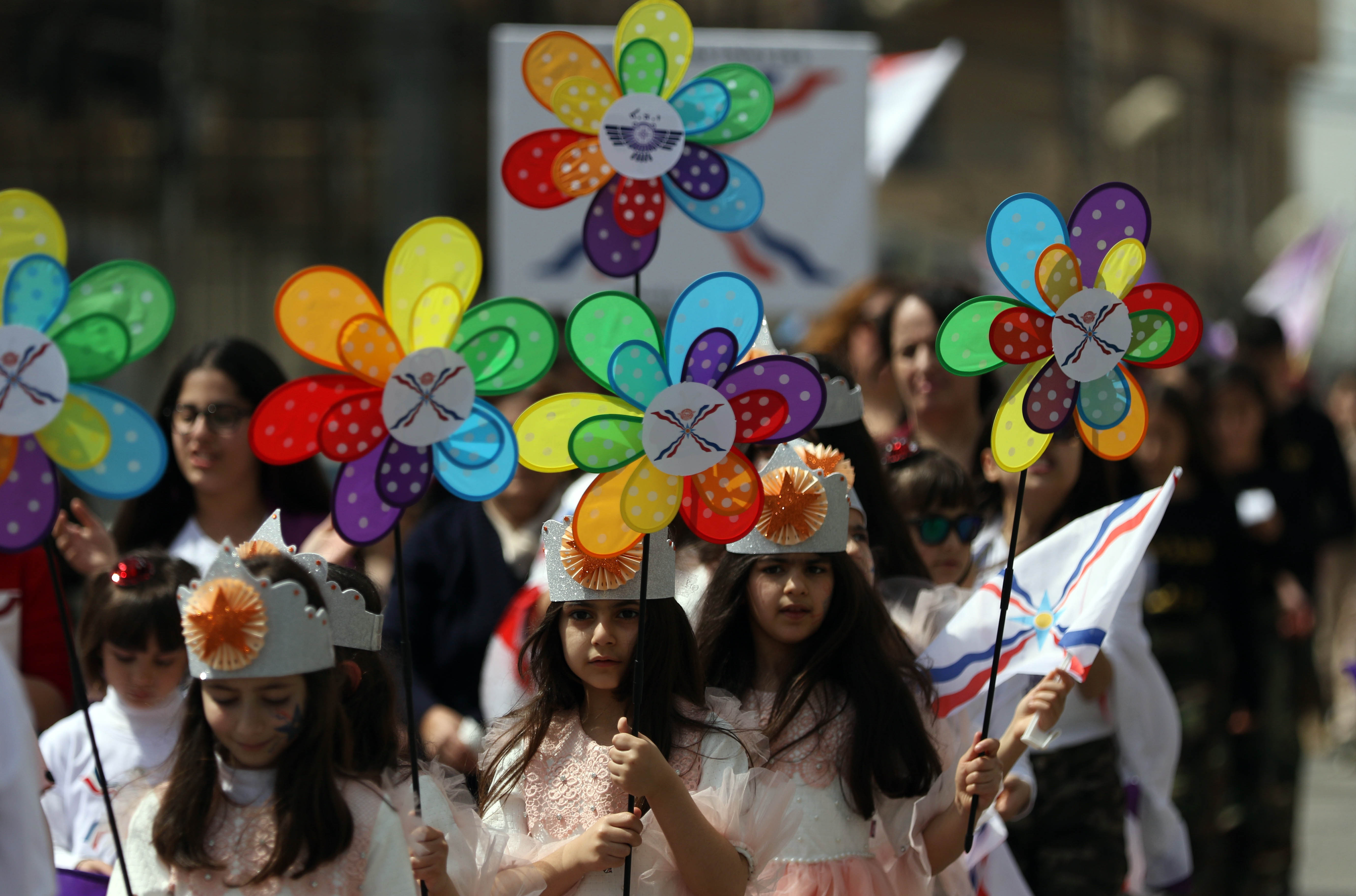 Iraqi Christian Assyrian children celebrate of their New Year (Aketo), in the Kurdish city of Dohuk, some 430 km (260 miles) northwest of the Iraqi capital Baghdad, on April 1, 2019. (Photo by Safin Hamed/AFP/Getty Images)

“In a groundbreaking moment for Assyrians in the country, the Iraqi Council of Ministers voted for the creation of a Nineveh Plain Governorate in January 2014,” Hanna said. “However, following the onslaught of ISIS, the decision has yet to be implemented despite the fact that the events of 2014 proved more than ever why a self-administered province for Assyrians and other marginalized groups is necessary.”

“The creation of a Nineveh Plain Governorate has consistently been undermined by the negligence of the Iraqi Government towards the Assyrians, as well as the deliberate interference from the Kurdistan Regional Government (KRG) which seeks its annexation into the Kurdistan Region. These factors have eroded the capacity of Assyrians in Iraq to achieve and secure conditions of real equality.”

What Assyrians believe could end their persecution is the promise of an autonomous administration in the Nineveh Plain becoming a reality, along with stronger Assyrian-led security. Assyrians there already have their own militia: the Nineveh Plain Protection Units (NPU). This region could also serve as a safe haven for other religious minorities, including Yazidis.

The civilized world will either help protect Assyrians — this ancient, unique yet severely persecuted community — or continue standing by while they disappear.