Michael Cohen acknowledged in congressional testimony it was “plausible” that President Donald Trump had not instructed him through coded language to lie to Congress about negotiations to build a Trump Tower in Moscow, as the former Trump lawyer has claimed.

Cohen has testified he believed Trump implicitly directed him to make false statements about the duration of his negotiations during the 2016 presidential campaign on a failed Trump Tower project in Moscow.

Cohen told the House and Senate Intelligence Committees in 2017 negotiations to build the Trump skyscraper ended in January 2016. In fact, Cohen pursued the ill-fated deal through June 2016. He pleaded guilty in the special counsel’s probe to making false statement to Congress, and is serving a three-year prison term for that and other charges.

Cohen’s belief that Trump told him to lie to Congress rests on an interpretation of what he claims was Trump’s coded language.

Cohen said when Trump told him in a May 2017 meeting in the Oval Office to “cooperate” with a congressional request for testimony, he was being instructed to lie. Cohen offered no hard proof to back up his assumption, but he said he had learned how to read Trump’s true instructions after a decade of working with him. (RELATED: Mueller’s Report Directly Contradicts BuzzFeed’s Bombshell Story About Michael Cohen)

Cohen had at the time been asked to sit for an interview with the House Intelligence Committee. He told Trump he rejected the request, and said Trump had asked him why he did so. 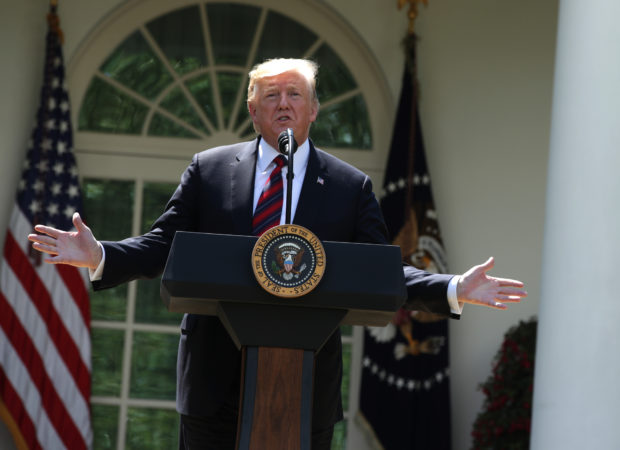 U.S. President Donald Trump speaks about immigration reform in the Rose Garden of the White House on May 16, 2019 in Washington, DC. (Photo by Alex Wong/Getty Images)

“Mr. Cohen, I just want to be really clear about something you testified to just a couple minutes ago. Describing that Oval Office meeting you had with [Trump lawyer] Jay Sekulow and the President, you said the President said to you, just cooperate. And are you telling this committee that you understood him to be telling you indirectly to lie?” a staffer asked Cohen during his March 6 appearance before the House Intelligence Committee.

But at one point in his testimony, Cohen acknowledged he could have been misinterpreting Trump.

BuzzFeed added updates to its original story, and the reporters who wrote the piece have acknowledged that their story was not accurate. Despite that, the website attempted to spin the Cohen transcripts Tuesday as bolstering the Jan. 17 piece.

But according to Cohen’s March 6 testimony, the conversation in the Oval Office did not get into the details of his congressional testimony, which took place months later.

Instead, Cohen said Trump urged him to “cooperate” and reiterated that there was no collusion and no business with Russia.

The special counsel’s report said prosecutors were unable to establish the Trump campaign conspired with the Russian government to influence the 2016 election.

Also in his testimony, Cohen refuted all of the allegations made about him in the infamous Steele dossier. Cohen denied visiting Prague during the campaign to pay off Russian hackers, as dossier author Christopher Steele claimed.

Cohen also said he “seriously” doubted the dossier’s claim that the Kremlin had blackmail video of Trump with prostitutes in Moscow.

Cohen testified he had heard rumors of a sex tape for years, but found no evidence to support the claims.

BuzzFeed, which first published the dossier Jan. 10, 2017, has not reported those details of Cohen’s testimony.