Former Vice President Joe Biden has emerged as the early frontrunner in the 2020 Democratic presidential race, much to the chagrin of incumbent President Donald Trump.

But the official Trump campaign and America First, a pro-Trump Super Pac, insist that they aren’t worried about a potential threat from Biden.

Tim Murtaugh, the communications director for the Trump campaign, told The Daily Caller that the campaign believes Biden will be forced to take on socialistic positions in order to win the primary — thus allowing the campaign to attack him as a radical in the general election.

“We don’t think there’s a centrist lane in the Democratic Party to win the primary. You cannot run as a centrist in 2019 as a Democrat and be successful,” Murtaugh said. “Biden himself has acknowledged a number of times he’s not even trying to be a centrist.”

Brian Walsh, the president of America First PAC, notes that Biden has a decades-long political career filled with missteps, explaining, “The most common question we get is, ‘What about Biden?’ Maybe I’m naive, but I’m not as afraid of Joe Biden as everybody else is. The guy has got a 40-year career in Washington.”

Biden’s political history and short time on the 2020 trail have revealed a number of weaknesses available for Trump to exploit if he ends up facing off against the former VP during the general election.

President Donald Trump has spent much of his presidency trying to negotiate a new trade deal with China in an effort to curb their economic influence, and has openly challenged the country on its friendly relationship with North Korea.

However, Biden dismissed the idea that China is a threat to the U.S., stating during an Iowa campaign stop, “China is going to eat our lunch? Come on, man.”

“They’re not competition for us,” Biden added.

It is well-documented that China engages in practices that threaten U.S. interests and harm American workers, such as heavily subsidizing its own industries, stealing intellectual property, and placing high tariffs on U.S. goods.

Biden later tried to walk back his comments, but Trump has already latched onto the narrative that Biden will be weak on China.

The reason for the China pullback & attempted renegotiation of the Trade Deal is the sincere HOPE that they will be able to “negotiate” with Joe Biden or one of the very weak Democrats, and thereby continue to ripoff the United States (($500 Billion a year)) for years to come….

China is DREAMING that Sleepy Joe Biden, or any of the others, gets elected in 2020. They LOVE ripping off America!

One of Biden’s biggest selling points is his appeal to blue collar voters because of his ties to Pennsylvania and Delaware. But Biden has to convince working class Americans that they should give the policies they abandoned in 2016 another try. Trump was able to break through the “blue wall” in 2016 by appealing to former Obama voters who felt they didn’t get a slice of the slow economic recovery.

Sleepy Joe Biden is having his first rally in the Great State of Pennsylvania. He obviously doesn’t know that Pennsylvania is having one of the best economic years in its history, with lowest unemployment EVER, a now thriving Steel Industry (that was dead) & great future!……..

Biden’s campaign announcement in April was followed by calls and visits to high-powered Democratic donors, allowing Biden to rake in $6.3 million in the first 24 hours in the race. But Biden’s pragmatic approach to fundraising may ruffle some feathers in the Democratic Party, which has become increasingly skeptical of the political sway that comes with a large donation. 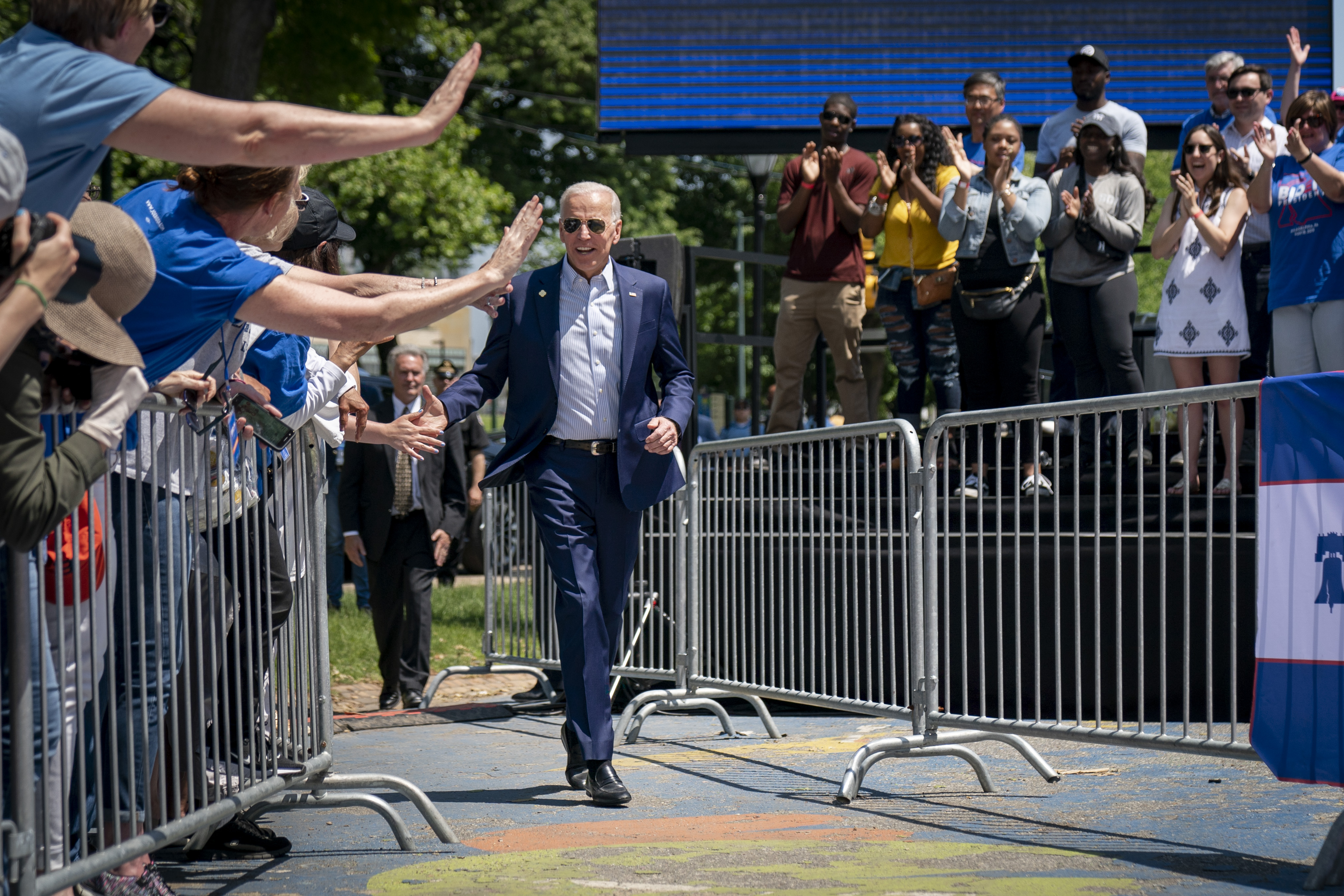 PHILADELPHIA, PA – MAY 18: Democratic presidential candidate, former U.S. Vice President Joe Biden arrives for a campaign kickoff rally, May 18, 2019 in Philadelphia, Pennsylvania. Since Biden announced his candidacy in late April, he has taken the top spot in all polls of the sprawling Democratic primary field. Biden’s rally on Saturday was his first large-scale campaign rally after doing smaller events in Iowa and New Hampshire in the past few weeks. (Photo by Drew Angerer/Getty Images)

Comparatively, Trump has relied on self-funding and the support of small donors, but managed to rack up more than $30 million for his reelection campaign in the first quarter of 2019. According to the campaign, 99% of the donations were less than $200, totaling an average of $34.26 per supporter.

At the same time, Trump will enjoy the support of top Republican bundlers in 2020. While many members of the traditional Republican donor class sat out 2016, the campaign says they are impressed enough with Trump’s first-term performance that they are jumping back into the fray and helping the campaign raise money from their friends.

In December 2018, Trump signed the “First Step Act,” a historic piece of legislation aimed at reforming the criminal justice system. The law, among other things, expands the incentives for participating in prison programs, dedicates more money to vocational training and education for prisoners, and allows elderly prisoners to be eligible for release at 60 instead of 65.

Biden has a more checkered record on criminal justice reform, earning criticism from the left for his work on the 1994 crime bill and his support for the war on drugs.

Biden’s support for tough-on-crime policies are far from the only thing in his political career that could come back to haunt him with the black electorate. In the 1970s, Biden opposed desegregation busing, which he said “codifies the concept that a black is inferior to a white.”

The former VP also has a history of racial gaffes, calling former President Barack Obama “the first mainstream African-American who is articulate and bright and clean and a nice-looking guy,” and telling a crowd of black voters that Republicans would put them “back in chains.”

In the battle for blue collar workers, Trump has a resonating message on immigration. The Trump administration says their crackdown on illegal immigration and reforms of the legal immigration system to favor high-skilled workers will protect American jobs.

In the mid-2000s, Biden opposed amnesty, supported a fence to stop drugs from pouring across the border, and supported jailing employers who hire illegal immigrants. Since then, Biden has attacked Trump’s immigration policy — particularly family separation and his attempts to curb sanctuary cities — perhaps putting him at odds with border states and middle Americans.

President Donald Trump also has an opportunity to attack Biden’s flip-flop on abortion. Biden once said taxpayers should not be compelled to pay for abortions, but now says the Hyde Amendment — which prohibits federal funding of abortion — should be repealed.

Trump heads into the 2020 race without the baggage of a long political career, a kicking economy, and other demonstrable policy achievements in his first-term as president. If Trump can hang on to middle America, it could be enough to neutralize Biden.