Just 21 percent of those polled said filmmakers should get rid of offensive plotlines and stereotypes when remaking old movies, while 55 percent said they should adhere as closely to the original script as possible. The sentiment largely held true among Democrats, Republicans, whites, blacks and hispanics, according to the poll, published last week. Even among Democrats, the most opposed to adhering to the original, 47 percent said the remake should not “change with the times.” 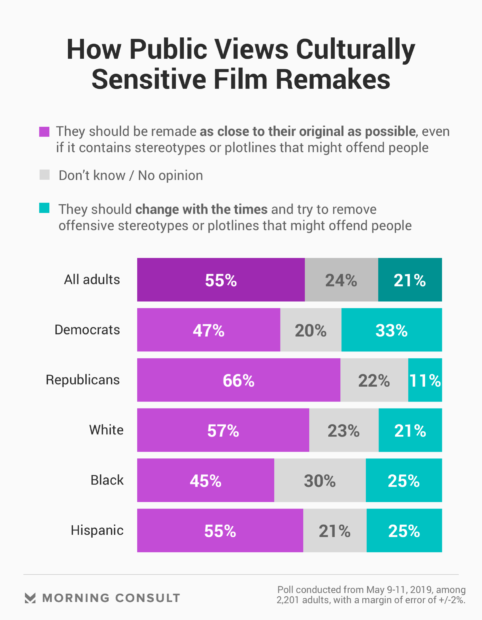 Morning Consult tied the poll to Disney’s string of live-action remakes of old classics, most recently “Aladdin.” Earlier this year, Disney released a remake of “Dumbo.” The movie did not include a scene from the original in which Dumbo meets a group of racially stereotypical crows led by “Jim Crow.” And an upcoming remake of “Lady and the Tramp” will not include the Siamese cats featured in the original because they were deemed offensive to Asians. (RELATED: Watch Will Smith In ‘Aladdin’ Trailer)

The poll was conducted May 9-11, and has a margin of error of 2 percentage points.