AJ+ has become a major video creator on Facebook, with its viral videos in the style of Buzzfeed or NowThis targeting liberal millennials. But unknown to some, it’s actually a branch of Al Jazeera and is owned by the government of Qatar, a Middle Eastern nation long accused of meddling in the affairs of other countries.

The AJ+ videos often focus on progressive ideals and are framed in a way that emphasizes the divisions in U.S. policy and politics. And Facebook doesn’t disclose the Qatar connection on videos AJ+ posts and apparently hasn’t blocked its content, even as the social media platform cracks down on fake news and hidden foreign influence.

“If AJ+ reaches a larger audience with its façade of progressivism, it doesn’t mean Qatar is more progressive. It just means its influence campaign is more effective,” a researcher with the Committee for Accuracy in Middle East Reporting in America, Gilead Ini, told The Daily Caller News Foundation.

YouTube labels AJ+ videos with a disclaimer that says “Al Jazeera is funded in whole or in part by the Qatari government” and includes a link to Wikipedia. It is the same label that appears on material from RT, previously known as Russia Today.

One video, for example, highlights how Democrats in the U.S. are increasingly opposing Israel, one of Qatar’s top priorities. 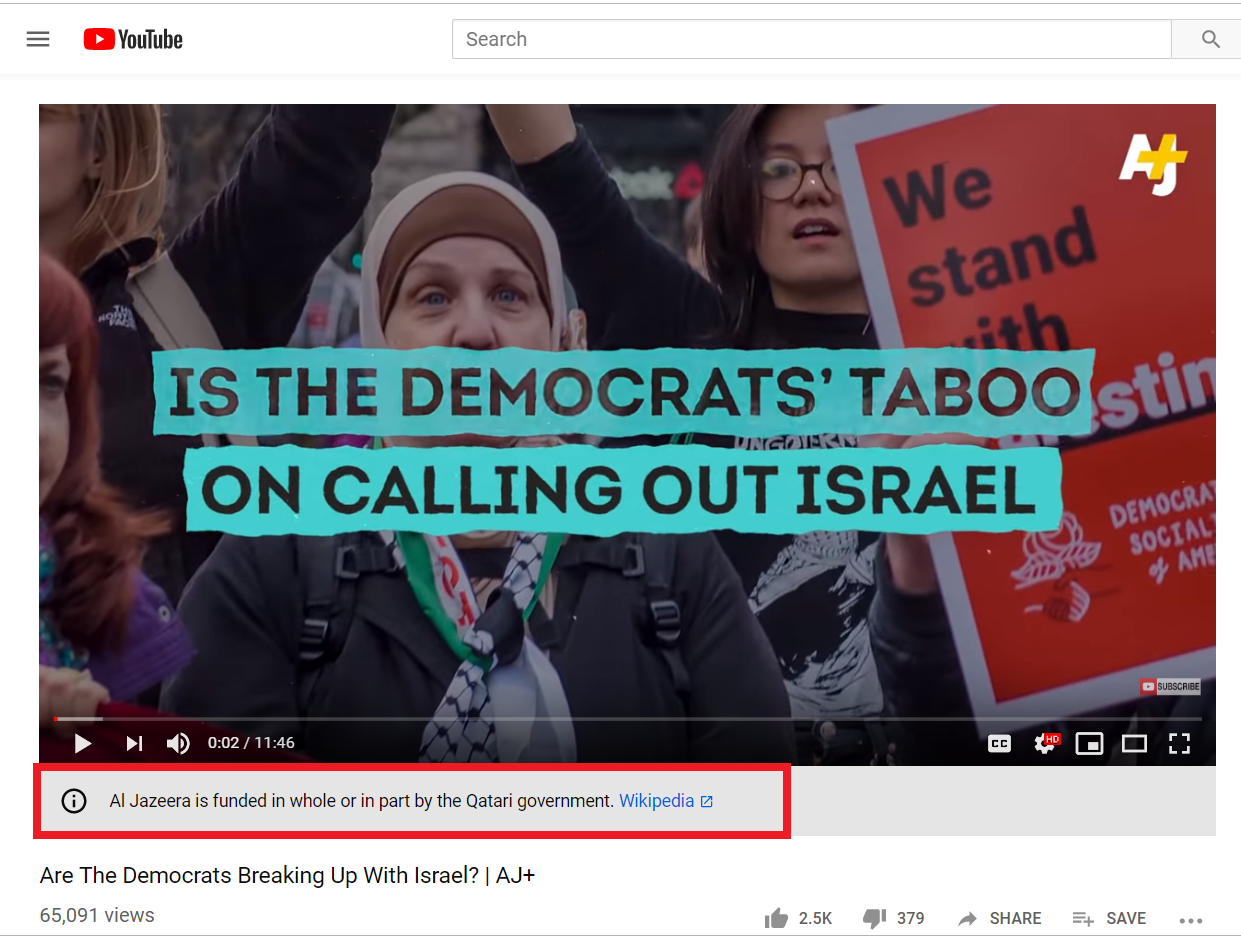 On Facebook, there is no such warning. Even as the social network has devoted massive efforts to stopping “fake news” and foreign meddling, the foreign government-funded news outlet that in May published a video denying the Holocaust has gone unchecked. AJ+ exists almost entirely through social media, primarily Twitter and Facebook.

Being aware of the outlet’s connection to Qatar is crucial. At first, its videos seem progressive, calling out racism, intolerance, sexism and poverty in America.

65 years ago today, the Supreme Court ruled that state-sanctioned segregation of public schools was illegal. But children of color still face inequalities.

This hearing blasted the Trump admin for failing to honor the 1954 Brown v. Board of Education ruling. pic.twitter.com/D2vemFocHJ

A transgender woman in an Illinois men’s prison is suing the Corrections Dept. She wants to be moved to a women’s facility.

She says she was raped and repeatedly assaulted by other prisoners, and officers ignored her complaints.

Yet much of Qatar’s foreign-born population are essentially slaves, and women have limited rights. Members of Congress have made calls to make Al Jazeera register as a foreign agent, and neighboring countries in the Middle East have called on Qatar to close the news outlet. (RELATED: Foreign-Funded Georgetown Program Seeks To Use Social Justice Rhetoric To Push Arab Agenda, With Talk Of ‘White Supremacy’ And ‘Hip-Hop’ About Islamophobia)

Meanwhile, AJ+ publishes videos criticizing policies and politics that are particularly divisive in the U.S., but are contrary to Qatar’s own laws. For example, AJ+ posted a video on Facebook on May 15 portraying Alabama abortion legislation as dangerous, yet Qatar imprisons women for unauthorized abortions.

AJ+ “targets young, left-leaning Americans by focusing on areas of young progressive interest, such as the ‘patriarchy,’ LGBT rights, and even the lives of indigenous American ‘punk rockers,'” wrote the Middle East Forum’s Samantha Rose Mandeles. “Though promoting intersectionality, feminism, same-sex marriage, and punk rock is not part of the traditional Qatari rhetoric … AJ+’s branding allows Doha to peddle anti-Semitism and anti-Americanism to a younger audience under the guise of minority rights.”

“For the Arab and Muslim world, where anti-Jewish, anti-American conspiracy theories are common and often part of normal discourse, Al Jazeera indulges in Islamist accusations of Jewish control and American subservience to Zionists,” she continued. “In English, the network attacks American society under the guise of anti-racism and advocacy for oppressed populations.”

AJ+’s videos are frequently framed as criticisms of America for insufficiently supporting abortion, the LGBTQ community and workers’ rights. But watchdog group Freedom House rates Qatar as only a 1 on a scale of 4 when it comes to whether “various segments of the population (including ethnic, religious, gender, LGBT, and other relevant groups) have full political rights and electoral opportunities.” It says:

Up to 90 percent of Qatar’s population is composed of noncitizens, including expatriates and migrant workers, who have no political rights or electoral opportunities. Citizenship is inherited exclusively from a Qatari father; residents can apply for citizenship after 25 years in the country, but this is rarely granted.

Qatari women enjoy some political rights, though they have little opportunity to organize independently and advocate for their interests. In the 2015 municipal council elections, five of the 130 candidates were women, and two of them won seats, up from one in the previous council. Four women were among the new Advisory Council members appointed in 2017, becoming the first women to serve on the council.

AJ+ also appears to weigh in on U.S. policy in a more straightforward manner. It has used opinionated language to fault America’s immigration controls and its foreign policy

Washington state’s AG said the motel chain will stop giving out guest info without a warrant + the cash is going to the 80,000 people who had their rights violated. pic.twitter.com/r7fUb1SnuE

Trump stooges on Fox and other GOP-friendly outlets ran with the Iran “threat” claims without any skepticism. Washington correspondents from more reputable outlets, perhaps thinking of the flawed case for the Iraq War, were more skeptical. (4/22)

Stop calling it the Gaza border. It’s not. pic.twitter.com/BSgqOLMqKx

Its rhetoric is similar in other western countries where it operates. Hours after Paris’s Notre Dame cathedral burned down, AJ+ published a long Twitter thread attacking the cathedral, saying the building didn’t need to be a church and that the “visions of Notre Dame as a beloved Catholic symbol are historically misleading.”

“The impulse to eradicate diversity within French identity is as old as Notre Dame itself,” it said.

Since Notre Dame was devastated by fire, the cathedral has been claimed as a symbol of French identity, of Catholicism and of far-right white nationalism. But as @wwjjddo explains, the building’s actual history is far more complicated: (1/13) pic.twitter.com/yODBa7E96S

Qatar’s neighbors — Saudi Arabia, the United Arab Emirates and Bahrain — plus nearby Egypt are boycotting the country for what they say are its efforts to manipulate them, including alleged support for the Muslim Brotherhood and the Arab Spring. They demanded that Qatar stop interfering in their affairs and close Al Jazeera, The New York Times reported.

Qatar’s most prominent attempt to gain the respect of other countries was its successful bid to host the World Cup in 2022 — a bid that allegedly involved bribes paid through Al Jazeera.

“In the event that the 2022 competition is awarded to the state of Qatar, al-Jazeera shall, in addition to the … rights fee, pay to Fifa into the designated account the monetary amount of $100m,” secret documents said, according to The Sunday Times.

Al Jazeera did not return a request for comment from TheDCNF.

A Facebook spokeswoman declined to comment on where Al Jazeera and AJ+ fits in the social media giant’s efforts against foreign meddling. 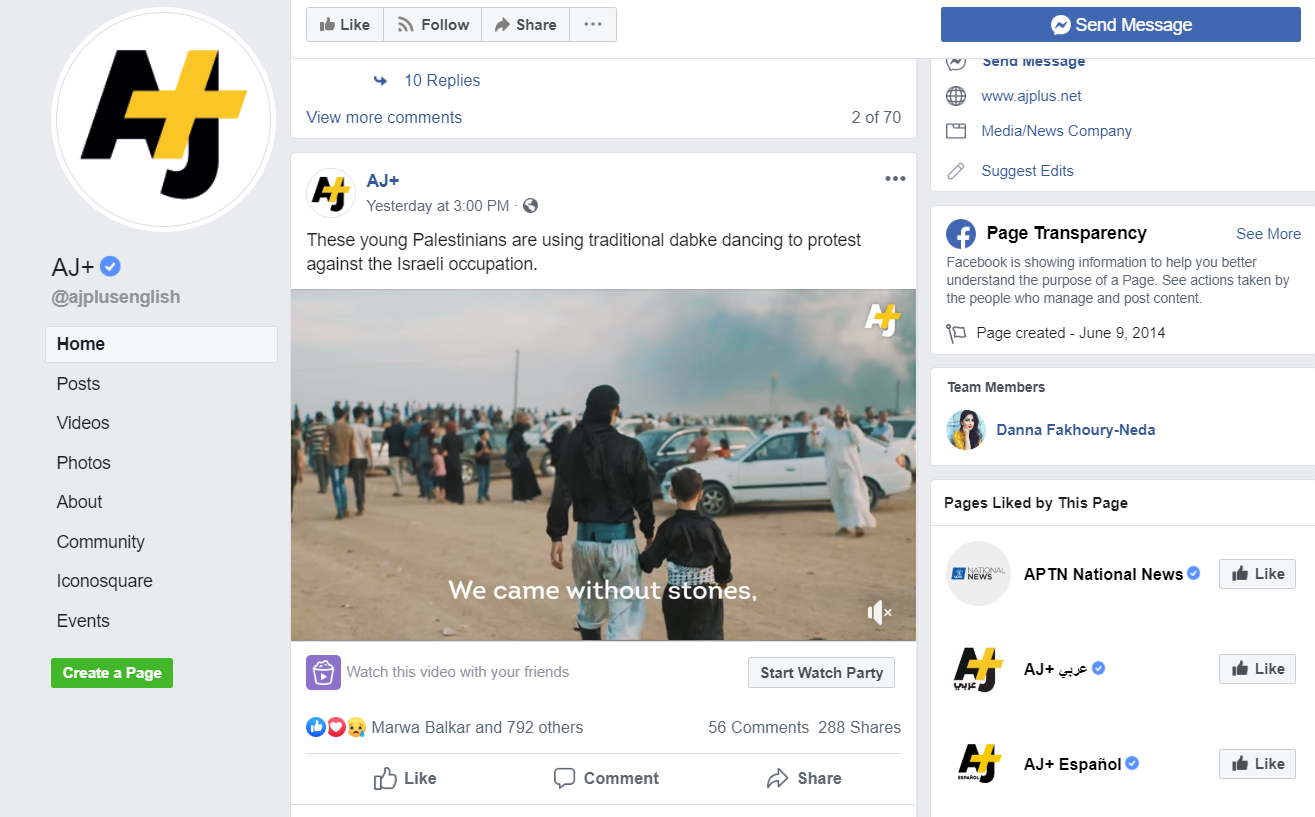 But as AJ+ itself noted in one of its many tweets about Israel, Facebook has clamped down on groups trying to influence elections while posing as news organizations elsewhere.

Facebook purged 265 Israeli-owned accounts that were trying to influence elections in Nigeria, Tunisia and other countries in Africa, Asia and Latin America. It says some posed as local politicians or news organizations. pic.twitter.com/BbmQxWFhBC

Democrats partially attribute Hillary Clinton’s 2016 presidential loss to Russian trolls’ efforts to conduct astro-turfing operations through Facebook groups. And Facebook set up an entire “war room” in Ireland after, as The New York Times put it, European leaders “warned that foreign groups will use social media to manipulate public opinion.”

The platform has also banned U.S. personalities like Alex Jones and prohibited talk of white supremacy.

Facebook co-founder Chris Hughes even called for breaking up Facebook — apparently in part because of how it allowed Russian trolls to influence the 2016 election — saying he had not considered how it could “change our culture, influence elections and empower nationalist leaders.”

There has been far less attention on AJ+ from Washington and Silicon Valley. One possible explanation is that while the Russians were widely perceived as meddling against Democrats, AJ+ presents as influencing in the opposite direction.

“AJ+ and RT have more in common than just their resident Holocaust deniers,” Ini, the CAMERA researcher, told TheDCNF. “They’re both propaganda tools of illiberal overseas regimes. And anyone who takes seriously Putin’s attempt to influence and divide Americans should also be wary of the Qatari propaganda outlet.”

Mandeles, with the Middle East Forum, told TheDCNF: “Americans should be just as concerned about exposing Qatar and Al Jazeera as they are about exposing any Russian interference in our elections. Even if Silicon Valley tech companies do not apply the same standards to Russian and Qatari propaganda, American media absolutely should.”