The New York Times traded in the term “fetal heartbeat” for “embryonic pulsing” in a report on Louisiana’s new abortion ban last week, playing to abortion advocates and journalists eager to downplay the realities of abortion.

“The measure would require an ultrasound test for any woman seeking to terminate a pregnancy, and forbid abortion if the test detects embryonic pulsing — which can occur before many women know they are pregnant,” reporter Alan Blinder wrote. The sanitizing language was first highlighted by Breitbart News. It’s not a medical term and was apparently invented by Blinder.

A slew of states have similar laws on the books, known as fetal heartbeat bills because they ban abortion after a heartbeat can be detected in the unborn baby. Blinder goes out of his way to avoid the term throughout the piece, noting in the lead that the bill bans the procedure “after the pulsing of what becomes the fetus’s heart can be detected.” (RELATED: Democratic Governor To Sign Latest Fetal Heartbeat Ban) 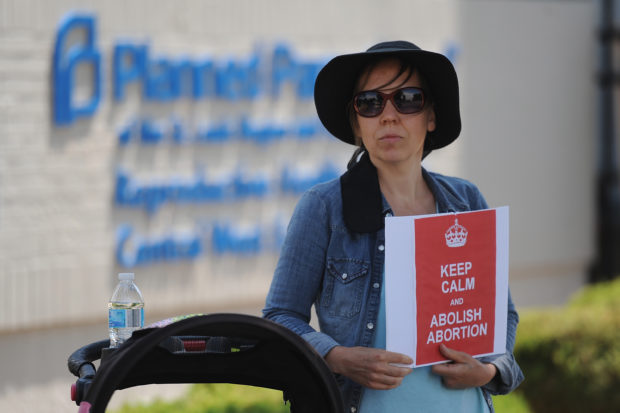 A woman displays a sign in support of abortion legislation during a pro-life rally outside the Planned Parenthood Reproductive Health Center on June 4, 2019 in St Louis, Missouri. (Michael B. Thomas/Getty Images)

An unborn baby isn’t considered a fetus in medical terms until the 11th week of pregnancy, when most of its major organs are formed. But the heartbeat of the boy or girl can be detected as early as 6 weeks.

Blinder’s decision to use “embryonic pulsing” instead of heartbeat falls in line with larger media efforts to dehumanize unborn babies and sanitize the reality of abortion. NPR urged journalists not to use the term unless absolutely necessary in recent guidance published as a reminder to reporters on its policies for abortion reporting. (RELATED: We Fixed NPR’s Obscene Abortion Style Guide)

The guidance explicitly instructs reporters to adopt opaque or sanitized terms and Planned Parenthood talking points while avoiding any terms that could come across as pro-life or inadvertently humanize the unborn. Reporters are told not to use the term fetal heartbeat unless it is in quotes and attributed to pro-life activists.

The guidance states: “One thing to keep in mind about this law and others like it: Proponents refer to it as a ‘fetal heartbeat’ law. That is their term. It needs to be attributed to them if used and put in quotation marks if printed. We should not simply say the laws are about when a ‘fetal heartbeat’ is detected. As we’ve reported, heartbeat activity can be detected ‘about six weeks into a pregnancy.’ That’s at least a few weeks before an embryo is a fetus.”