NPR published long-standing guidance on abortion reporting this week as a public reminder of its policies in light of the heated abortion debate prompted by a slew of state laws regarding the procedure.

Most recently, Alabama banned abortion after six weeks into a woman’s pregnancy. On the flip side, New York recently voted to lift restrictions on late-term abortions.

The guidance explicitly instructs reporters to adopt opaque or sanitized terms and Planned Parenthood talking points, while avoiding any terms that could come across as pro-life or inadvertently humanize the unborn.

The guidance tells reporters that such terms are “part of the strategy used by anti-abortion groups to shift language/legality/public opinion.” The guidance makes no mention of how sanitized terminology helps advance the political agenda of pro-abortion groups.

NPR receives tax dollars in the form of grants from the Corporation for Public Broadcasting, which the organization says on its website is “essential” to its existence. In 2017, NPR reports 12 percent of its public radio station revenues were from taxpayers. Nearly $2 million came from CPB and other federal grants.

Here is a version of NPR’s published guidance, fixed for clarity [additions in brackets]:

“ABORTION PROCEDURES & TERMINOLOGY: Use the term intact dilation and extraction to describe the procedure during which [a doctor forcibly removes a living unborn baby from a mother’s womb by a combination of suction and the use of a surgical instrument], or a procedure known medically as intact dilation and extraction; opponents call it partial-birth abortion [because the unborn baby is still alive when the abortionist vacuums part of him or her out of the womb, then uses a metal forceps to remove any larger pieces that might remain.]” 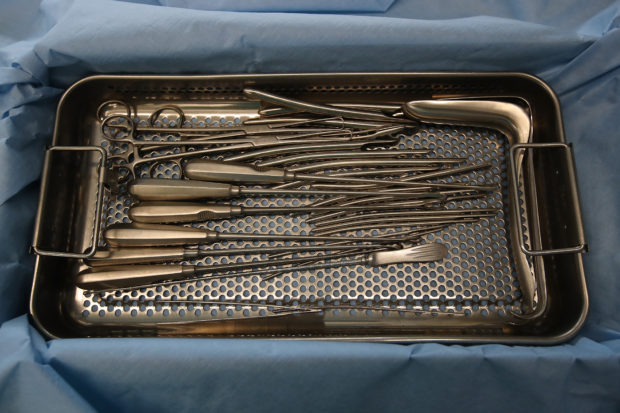 The surgical tools of doctor Janusz Rudzinski that he uses for performing abortions lie in a steel tray in a surgery room at the Krankenhaus Prenzlau hospital on April 3, 2018 in Prenzlau, Germany.(Sean Gallup/Getty Images)

On the latter, it is necessary to point out that the term partial-birth is used by those opposed to the procedure; simply using the phrase so-called partial birth abortion is not sufficient without explaining who’s calling it that. Partial-birth is not a medical term and has no exact parallel in medical terminology; intact dilation and extraction is [a term that obscures the reality of the procedure in order to advance a pro-abortion political agenda.]

Also, it is not correct to call these procedures RARE — it is not known how often they are performed. Nor is it accurate to use the phrase LATE TERM ABORTION. Though we initially believed this term carried less ideological baggage [for abortion proponents] when compared with partial-birth, it still conveys the sense that the fetus is [a fully developed human being capable of living outside the womb] when the abortion is performed. It gives the impression that the abortion takes place [at a point when the fetus is clearly more than a clump of cells, which makes advancing a pro-abortion agenda more difficult.]

An abortion rights activist holds up a sign as marchers take part in the 46th annual March for Life in Washington, U.S., January 18, 2019. (REUTERS/Joshua Roberts)

NPR doesn’t use the term “abortion clinics.” We say instead, “medical or health clinics that perform abortions.” The point is to not use abortion before the word clinic [because readers might get the more accurate sense that these are abortion factories with a side of basic health care.] The clinics perform other procedures and not just abortions, [according to well-known Planned Parenthood talking points.]

Do not refer to murdered Dr George Tiller as an “Abortion Doctor.” Instead we should [obscure the fact that Tiller personally conducted late-term abortions by saying] Tiller operated a clinic where abortions are performed. We can also make reference to the fact that Tiller was a doctor who performed late abortions. [No need to mention that he achieved his notoriety for opening just one of three clinics in the country where abortionists were paid to perform third trimester abortions.]

Here’s some additional guidance from Joe Neel, regarding the Unborn Victims of Violence Act:

The term “unborn” implies that there is a baby inside a pregnant woman, not a fetus. Babies are not babies until they are born. They’re fetuses. [C]alling a fetus a “baby” or “the unborn” [humanizes the child and] [could inadvertently] shift language/legality/public opinion [so that people understand the reality of abortion procedures, which is the exact opposite political result NPR’s leadership intends.] Use “unborn” only when referring to the title of the bill (and after President Bush signs it, the Unborn Victims of Violence Law). Or qualify the use of “unborn” by saying “what anti-abortion groups call the ‘unborn’ victims of violence.” The most neutral language to refer to the death of a fetus during a crime is “fetal homicide.”

On the air, we should use “abortion rights supporter(s)/advocate(s)” and “abortion rights opponent(s)” or derivations thereof (for example: “advocates of abortion rights”). It is acceptable to use the phrase “anti-abortion rights,” but do not use the term “pro-abortion rights.” [The term ‘pro-abortion rights’ suggests women might not actually have the right to allow abortionists to end the life of their unborn babies.] Digital News will continue to use the AP stylebook for online content, which mirrors the revised NPR policy. Do not use “pro-life” and “pro-choice” in copy except when used in the name of a group. Of course, when the terms are used in an actuality they should remain.