Victims of Communism Memorial Foundation held the rally Tuesday to commemorate the 30th anniversary of the Tiananmen Square massacre.

“We just want to call for more human rights attention because it’s so hard for us to contact our family members in China. It’s almost impossible,” Tracy Jiao said.

Jiao is a member of Church of the Almighty God, a religious movement founded in 1991 that co-hosted Tuesday’s rally. (RELATED: It’s The 30th Anniversary Of The Tiananmen Square Massacre)

“The Chinese Communist Party has been doing [this] kind of things always,” Jiao continued. “They not only covered the Tiananmen Square, the truth, they also crack down [on] the religious communities and any dissidents and human rights lawyers. No matter what kind of groups or individuals they persecute, they will cover everything.” 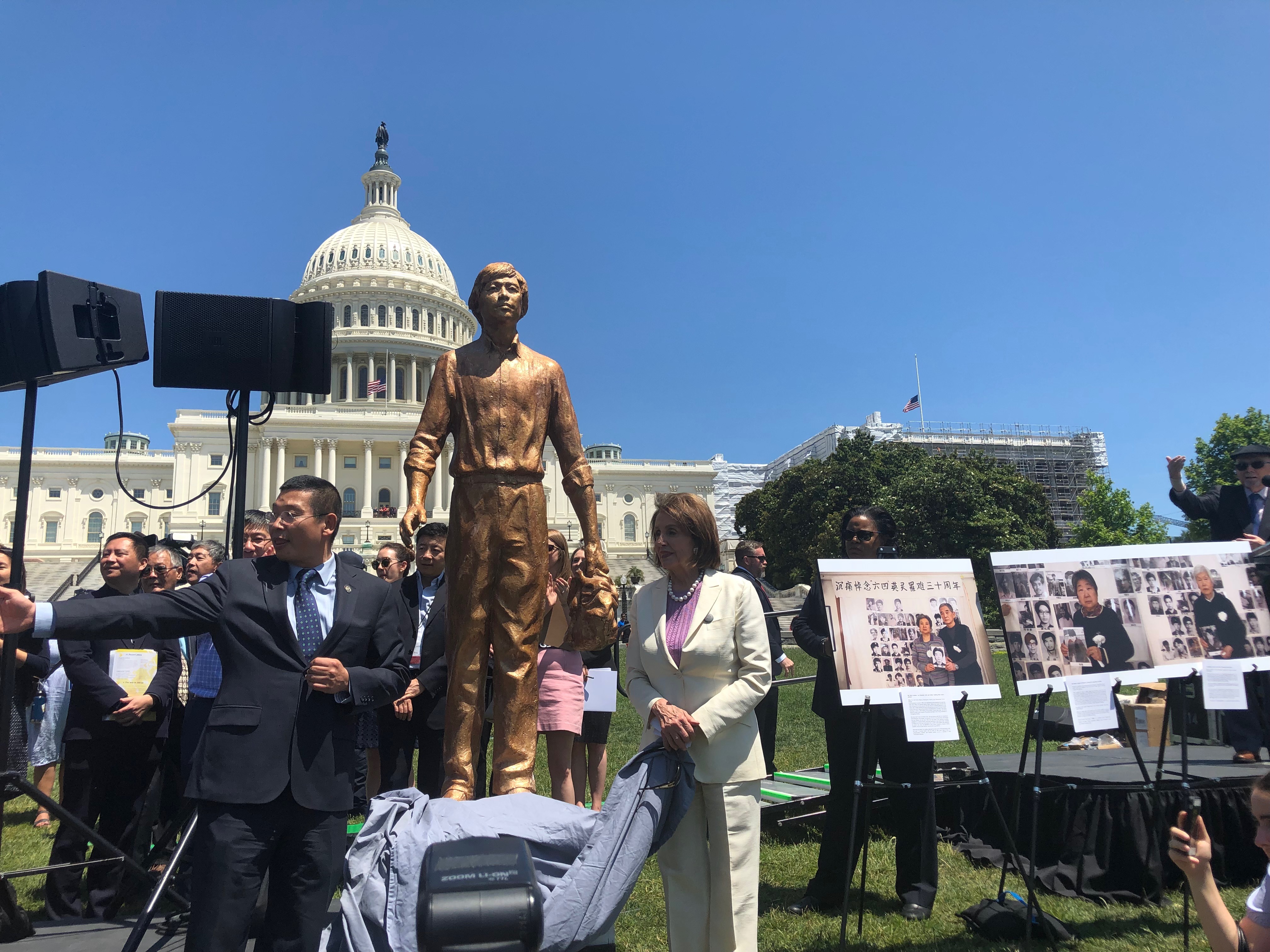 House Speaker Nancy Pelosi helped unveil a statue of the iconic Tank Man at a rally to commemorate the 30th anniversary of the Tiananmen Square Massacre held by the Victims of Communism Memorial Foundation in Washington, D.C., on June 4, 2019. Photo by Evie Fordham

When asked about the tit-for-tat tariff battles between the U.S. and China, Jiao took a positive stance.

“I don’t know too much about that, but I know that the United States and China, they are having a trade war, and I think it’s a good way [to pressure China],” she said.

“I think that [Trump] is doing a good job. He should have done that earlier,” he said at the rally. “The relationship between China and the United States is intertwined. In many ways we may consider them as friends, but they do not consider us their friends.”

Huang was a high school junior when his dad called him in front of the television to watch the unfolding violence that evolved into the Tiananmen Square massacre. 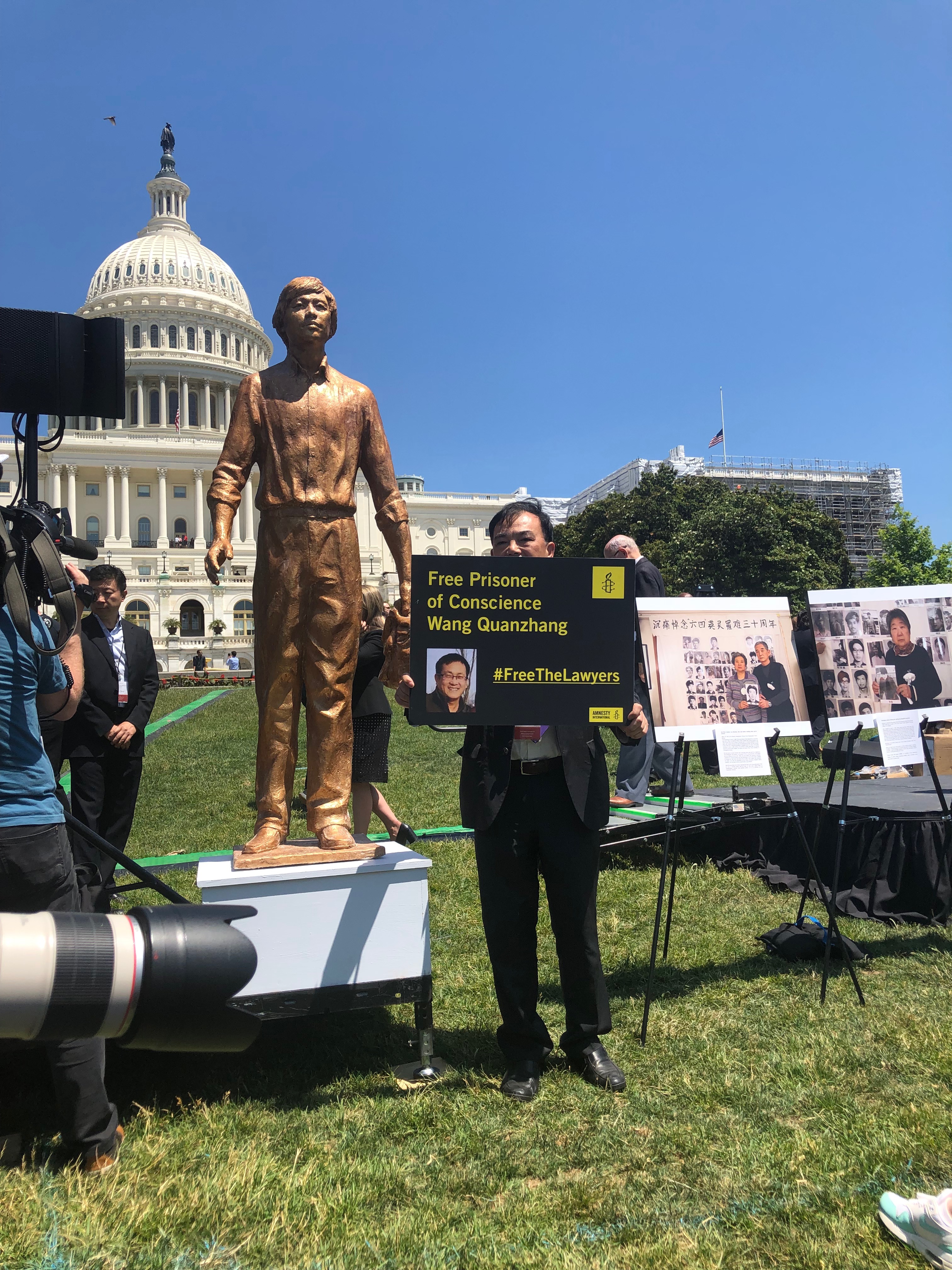 A rallygoer displays a sign in front of the just-unveiled statue of the iconic Tank Man at a rally to commemorate the 30th anniversary of the Tiananmen Square Massacre held by the Victims of Communism Memorial Foundation in Washington, D.C., on June 4, 2019. Photo by Evie Fordham

“Cracking down on the students, on the people in the square, and then afterwards we realized that actually they were launching like a purge or a massacre in the place,” he said. “It has been 30 years, but that picture is still kind of stuck in my mind. … I still feel like I want to support everyone who has been fighting for freedom and democracy in China.”

He said many people in the U.S. have a “fantasy” about China and do not understand its drastic conditions. He calls them “panda huggers.”

“I would say that they should wake up from that because I am from a place that has been threatened by China for decades,” Huang said, citing the precision-strike missiles China keeps aimed at Taiwan.

He counted Democratic presidential contender Joe Biden among the “panda huggers,” dismissing him as “too naive” after Biden was forced to clarify comments about China not being an economic threat to the U.S. last week.