The upcoming hearing titled “Lessons from the Mueller Report: Presidential Obstruction and Other Crimes” is expected to include testimony from Watergate key witness John Dean along with other legal experts to drive the obstruction narrative for Democrats. However, former special counsel Robert Mueller will not be a witness. (RELATED: Pelosi Reportedly Says Impeachment Too Good For Trump, Should Be ‘In Prison’)

Collins wrote in a letter to the chairman:

The fact you are attempting to make the case for starting an impeachment inquiry has no bearing on the applicability of the Rules. Outside of such an inquiry, Members are prohibited from accusing the President of a crime or alluding to potential impeachable offenses. Jefferson’s Manual further states:

Although wide latitude is permitted in debate on a proposition to impeach the President, Members must abstain from language personally offensive; and Members must abstain from comparisons to the personal conduct of sitting Members of the House or Senate. Furthermore, when impeachment is not the pending business on the floor, Members may not refer to evidence of alleged impeachable offenses by the President contained in a communication from an independent counsel pending before a House committee, although they may refer to the communication, itself, within the confines of proper decorum in debate, and may not otherwise suggest that the President has done something worthy of censure or impeachment.

“The Rules of the House dictate minimum standards of decency and decorum, setting forth how Members must conduct themselves during debate. However, Majority Members of the Committee have demonstrated they either do not understand the Rules or simply are under the mistaken belief the Rules do not apply to them,” he said.

Monday’s hearing inevitably sets our committee on a collision course with the longstanding Rules of the House. https://t.co/2qj13FMaTa

Collins continued, “The core component of the Rules governing decorum is Members may not ‘engage in personalities’ with Members of Congress, Senators, or the President. Considering the topic of Monday’s hearing, I encourage all Members of the Judiciary Committee to read Jefferson’s Manual.”

Several Democratic members have already broken these rules of conduct. On May 8 at a committee hearing, Democratic California Rep. Eric Swalwell referred to President Trump as a “pathetic person.” 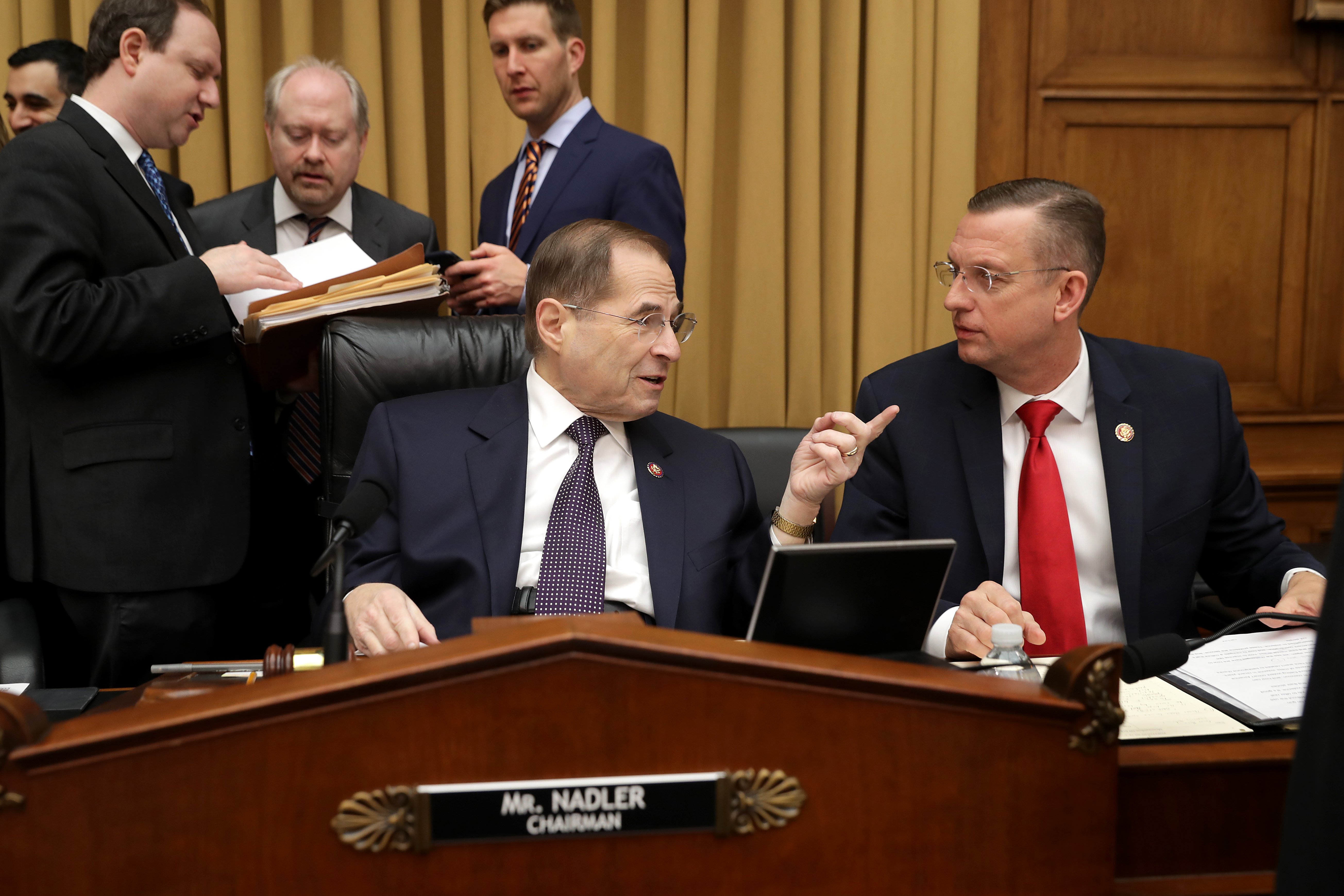 At the same committee hearing, Democratic Maryland Rep. Jamie Raskin said the president “turned the government of the United States into a moneymaking operation” for himself and his family and further addressed remarks to the president stating, “you violate and undermine the laws of the United States.” Jefferson’s Manual, Collins wrote, indicates this statement was out of order.

Democratic Florida Rep. Val Demings was out of order at the same committee hearing, according to Collins, when she stated, “the President of the United States encouraged his associates to hide the truth, illegally suggested that he would pardon witnesses, and threatened them with retribution if they didn’t protect him.” She added, “In short the special counsel’s report shows a shocking story of corruption and obstruction.”

Collins said of Demings’ accusation, “Jefferson’s Manual states any suggestion of mendacity is out of order. This includes suggestions the President misrepresented the truth, attempted to obstruct justice, or encouraged others to perjure themselves.”

Nadler himself made disparaging remarks about the president during committee hearings, which Collins said were out of order.

At a May 21 committee hearing Nadler said in his opening statement the president is “putting himself and his allies above the law” and that the president “took it upon himself to intimidate a witness who has a legal obligation to be here today.”

Nadler made these comments in addition to saying that former federal prosecutors “have agreed that the -president committed crimes.”

“Outside of impeachment proceedings — which is clearly the case here — it is out of order for a Member of Congress, in debate, to engage in personalities with the President or express an opinion, even a third-party opinion, accusing the President of a crime. The Rules are clear on this point,” Collins wrote.

House Speaker Nancy Pelosi and Nadler have differed over when Democrats should begin impeachment proceedings against President Trump. While Pelosi prefers a slower multi-committee investigative route, Nadler has continued to pressure the speaker to allow an impeachment inquiry.