A popular tech reporter who wrote about Microsoft was arrested for allegedly soliciting sex with children online, according to a complaint filed in May.

Peter Bright sought to molest a 7- and 9-year-old and was later arrested after meeting with an undercover agent to facilitate the action, the federal complaint alleges. Bright, who formerly worked for tech outlet Ars Technica, claimed to be in a sexual relationship with an 11-year-old.

An undercover FBI special agent contacted Bright in April on KinkD, a social media fetish platform, according to the document, which was filed in the U.S. District Court for the Southern District of New York. The agent informed Bright that she had a 7-year-old daughter and 9-year-old son. He reportedly discussed the possibility of molesting the 7-year-old.

The complaint alleges that Bright, who is currently being held without bail, discussed ways of training the children. “I’m thinking maybe something involving foreskin is the way to start,” he allegedly told the agent. Bright also claimed to have molested an 11-year-old girl, the complaint alleges. 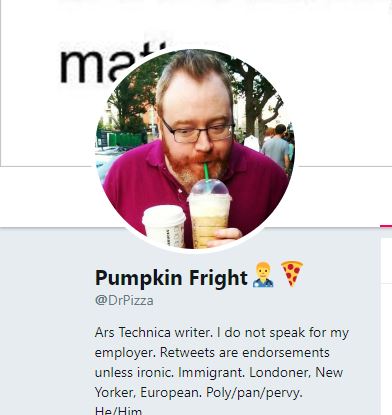 Screencap of former Ars Technica writer’s Twitter profile. He was arrested in May for allegedly soliciting a minor (Screenshot/Twitter)

Bright was arrested on May 22 upon meeting the agent. The federal inmate database shows that a man named Peter Bright is currently being held at the Metropolitan Correctional Center in Manhattan, The Daily Dot reported Saturday. (RELATED: A Sex Offender Set To Be Released Has Threatened To ‘Rape The First Woman He Sees’)

Bright was a successful tech reporter, amassing a Twitter following of 18,000 users. He covered topics like Microsoft and hackers. His reputation is spotty, according to tech writers who claim Bright often spread lies and misinformation.

“Peter Bright (@DrPizza) is one of several ArsTechnica/Condé Nast journalists who have spread outrageous lies about me for years. Technology Editor since 2014,” writer and gamer Palmer Luckey told his Twitter followers Sunday. Other people who work in the tech industry expressed surprise after outlets began reporting of Bright’s arrested.

“I am shocked. @DrPizza is well-known for his Microsoft reporting, and he’s an accused sexual predator. I feel physically sick that I’ve known this man for years and this is what he’s capable of,” Tom Warren, a reporter at The Verge, wrote in a tweet Saturday.

An official with Condé Nast, Ars Technica’s parent company, confirmed the Peter Bright who was arrested and being held in the Manhattan Correctional center was an employee with Ars Technica. A representative told reporters that Bright is no longer employed at Ars Technica.