The Supreme Court will consider whether to review a constitutional challenge to President Donald Trump’s power to unilaterally impose tariffs on steel and aluminum.

The American Institute for International Steel is leading a coalition of businesses arguing that a provision of the Trade Expansion Act that Trump used to impose the tariffs is an unconstitutional delegation of power from Congress to the president.

“If this delegation is upheld, Congress will be permitted to assign the president the unchecked power to make any laws regarding taxation and regulation of foreign commerce, as he sees fit, in violation of the fundamental principle of separation of powers,” the Institute’s petition to the high court reads.

The president imposed a 25% tariff on imported steel articles in March 2018 and a 10% tariff on aluminum imports, citing his power under section 232 of the Trade Expansion Act. Section 232 establishes a process, beginning with an investigation by the Commerce Secretary, through which the president can “adjust the imports … so that such imports will not threaten to impair the national security.”

The industry groups believe the section 232 power is essentially unbounded for several reasons: Its definition of “national security” is far-reaching, and it imposes no limit on the kinds of import penalties that can be imposed.

“The president is, in effect, empowered to make the kinds of distributional and policy choices that the Constitution assigns to Congress,” the industry group’s petition reads.

The administration, citing the 1976 decision, says section 232 is constitutional because it establishes baseline conditions for presidential action, limits the range of actions the president may take, and sets a list of criteria the president must consider before invoking the authority. The Department of Justice filed its own brief urging the justices not to take the case. 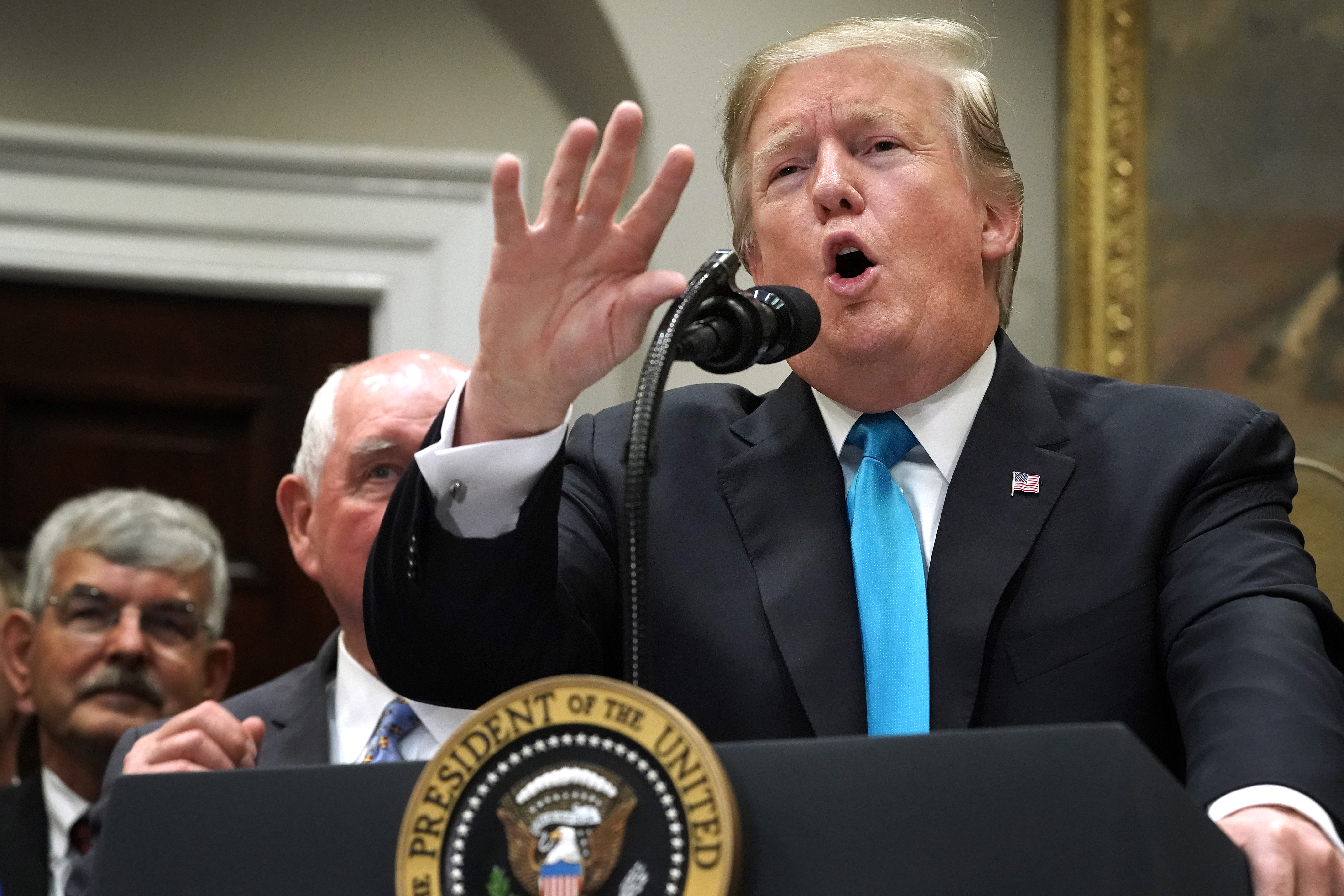 President Donald Trump delivers remarks in support of farmers and ranchers at the White House on May 23, 2019. (Chip Somodevilla/Getty Images)

Presidents have exercised section 232 authority on five occasions, according to the Trump administration’s brief. Former President Ronald Reagan most recently invoked the power in 1982 when he placed an embargo on petroleum imports from Libya.

The government also noted that Congress generally gives the president significant latitude to operate in the foreign policy and national security spheres.

The justices are considering another non-delegation challenge in Gundy v. U.S. arising from the Sex Offender Registration and Notification Act (SORNA). Since the outcome in Gundy could bear on the tariffs dispute, the administration said the petition should be rejected so a lower court can side the case in light of the Gundy decision.

“The Court’s decision in that case may shed light on non-delegation principles generally, and thus on the proper analysis of petitioners’ challenge to Section 232,” the government’s brief reads.

In a somewhat unusual move, the American Institute for International Steel is asking the justices to take the case before an appeals court weighs in. Such requests are rarely granted, though the plaintiffs argue on the Supreme Court can resolve the underlying dispute, making further litigating in the lower courts a waste of judicial resources.

The justices will meet in private conference to discuss the tariffs dispute on June 20. The case is No. 18-1317, American Institute for International Steele v. U.S.