The Committee to Protect Journalists (CPJ) told the Daily Caller News Foundation that the attack of Andy Ngo at an Antifa rally Saturday was “unacceptable,” but it hasn’t yet issued a written statement condemning the attack.

CPJ is a non-profit organization that promotes freedom of the press and aims to defend journalists rights. It has not published a written statement on its website about the attack on Ngo Saturday by masked men that resulted in an alleged brain bleed. CPJ told the DCNF it is still working with the U.S. Press Freedom Tracker to document the case as of Monday.

“CPJ has taken a special interest in how journalists are treated at protests,” Alexandra Ellerbeck, CPJ North America program coordinator, told the DCNF. “Through the U.S. Press Freedom Tracker—a joint collaboration with Freedom of the Press Foundation—we’ve covered more than 97 cases of journalists being physically assaulted, at least 48 of which happened in the context of protests.”

CPJ has previously documented a case where Ngo was sprayed with bear repellent and assaulted in May of 2019. The article gave information about the assault, but did not condemn the physical violence against Ngo, who “identifies as an independent journalist and photographer.” (RELATED: Andrew Yang Expresses Support For Journalist Attacked At Antifa Rally)

Ngo is currently an editor at Quillette.

“The Tracker is reaching out to Ngo and is documenting Saturday’s case,” Ellerbeck told the DCNF. “Journalists should not have to fear physical violence when covering public demonstrations, and what happened to Andy Ngo is unacceptable.” 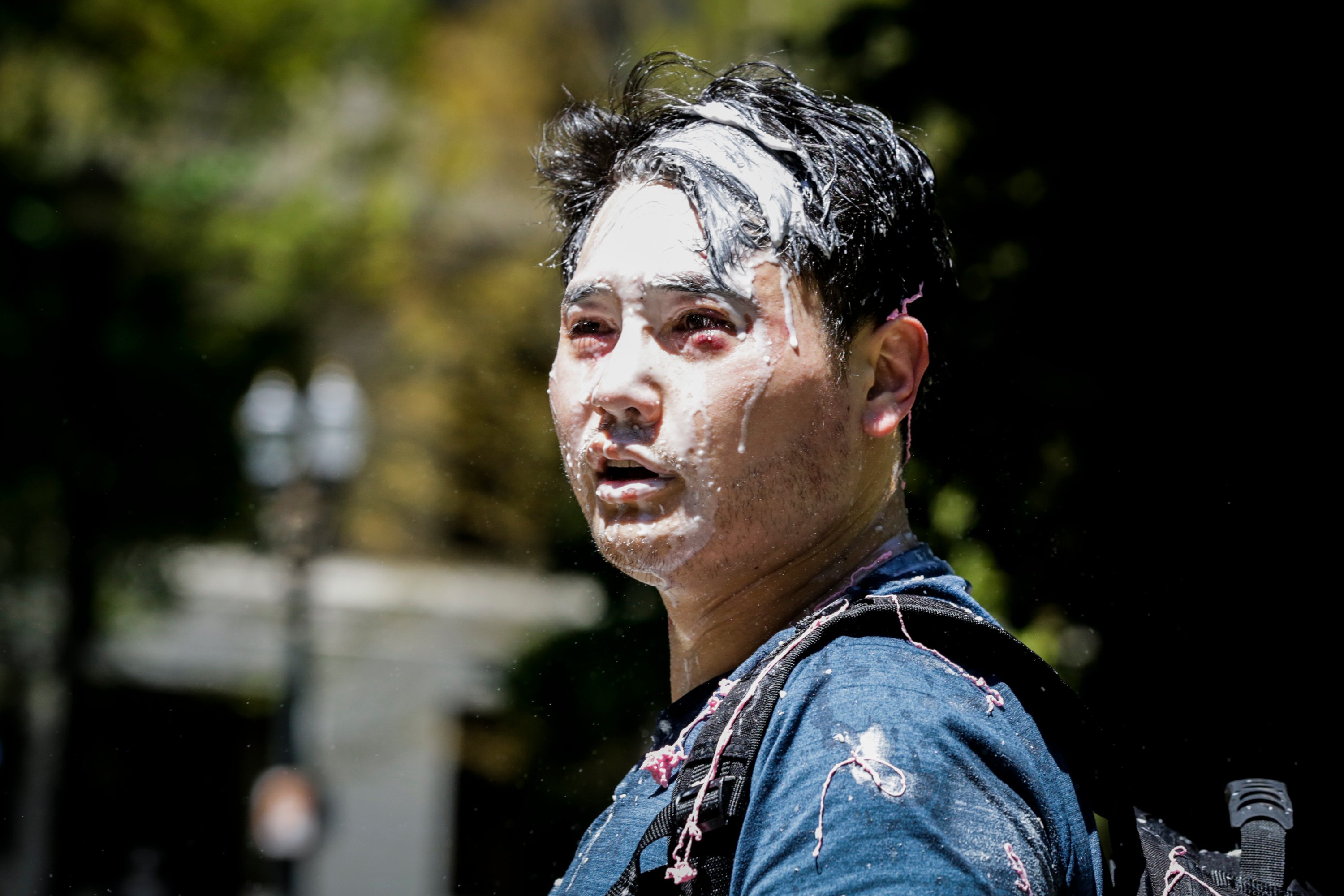 BBC cameraman Ron Skeans was assaulted while covering one of President Donald Trump’s rallies in Texas in February 2019. CPJ issued a statement within 24 hours of the attack stating it was “concerned about journalists’ safety at Trump’s rallies.”

“It’s outrageous that a journalist was attacked while covering a presidential speech,” said Ellerbeck, according to the statement. “We call on President Trump to moderate his rhetoric against the press and to state clearly that physically attacking media personnel is not acceptable.”

This article also commented on a previous attack of a journalist at another Trump rally. The article cited the U.S. Press Freedom Tracker, CPJ’s partner, stating that Trump had “spoken fondly of a physical attack on a journalist during a rally in Montana.” 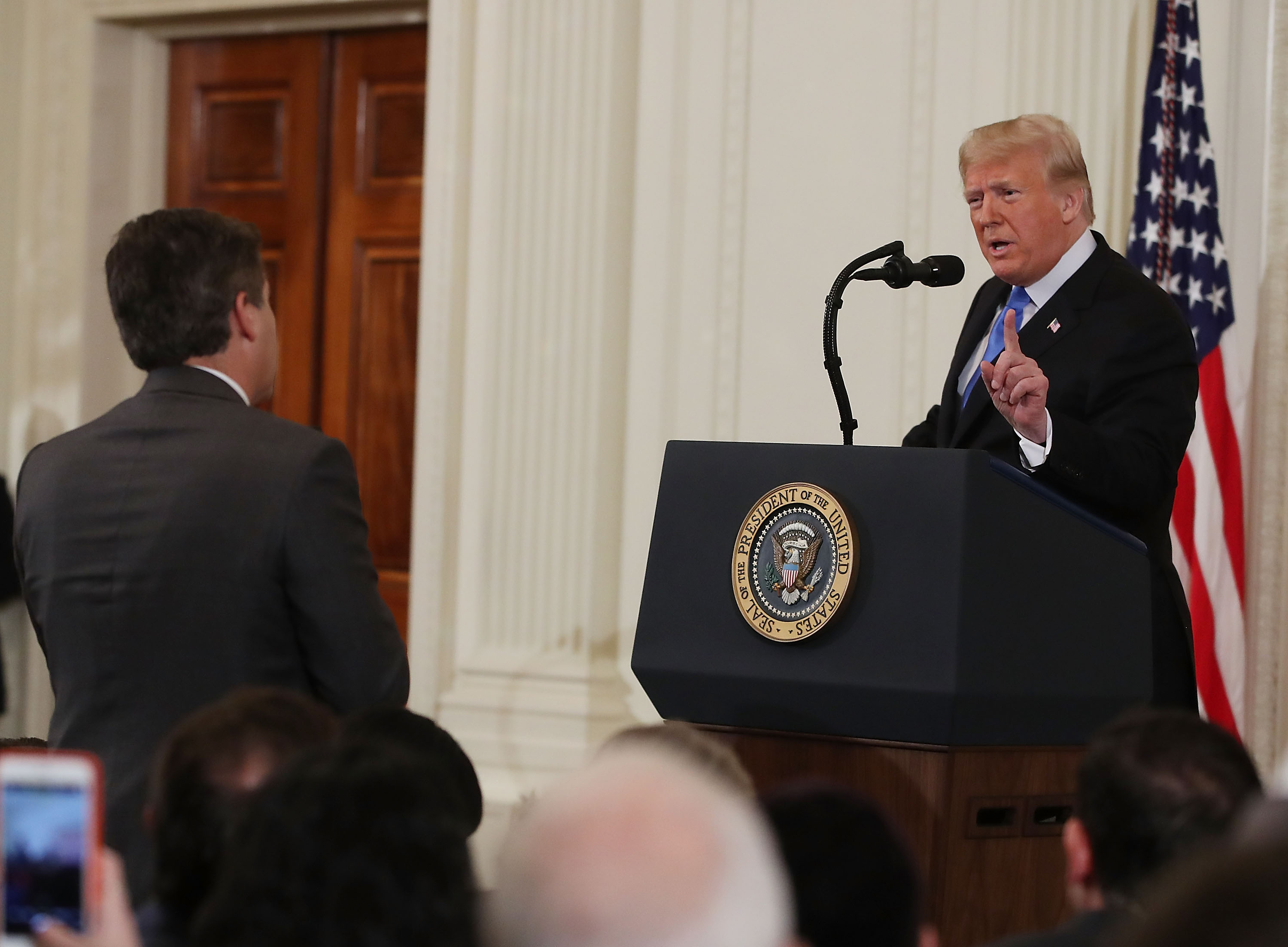 U.S. President Donald Trump gets into an exchange with Jim Acosta of CNN after giving remarks a day after the midterm elections on November 7, 2018 (Mark Wilson/Getty Images)

The non-profit documented the attack of “freelance photojournalist Kyle Ludowitz” in November of 2016. He suffered from a broken cheekbone as he tried to photograph protestors looting and vandalizing businesses in California, the article read. The statement was also issued within a day of the attack.

“Journalists have faced increasing threats and violence at political events throughout the U.S. presidential election campaign,” said Carlos Lauria, senior coordinator of the CPJ Americas program, according to the statement. “The trend toward heightened violence targeting the press is alarming, and must be reversed.”

This article described the attack as protests centered around Trump’s then-upcoming presidential election.

“In the past weeks, journalists have faced threats and attacks both from professed supporters and opponents of Trump,” the article read.

Despite being active and quick in condemning other attacks and freedom of the press violations, CPJ has not written any articles about the attack on Ngo.

“We report as quickly as possible on any case based on our own independent investigation and verification of information,” according to a statement responding to why the Ngo documentation was taking longer than previous attacks. “While CPJ is a member of the press tracker steering committee, they [U.S. Press Freedom Tracker] have their own editorial process.”

The DCNF was referred to the U.S. Press Freedom Tracker, which said that it does “not make statements on incidents.”