Chief Justice Roberts has cut a Solomonic middle way in several recent decisions, which some believe is intended to protect the reputation on the court but, as some conservatives have begun to say, really increase its power.

One of the climactic moments of Roberts tenure came in 2012, when he was the deciding vote to uphold the Affordable Care Act in the case of NFIB v. Sebelius. According to court insiders, Roberts initially voted with the court’s more conservative wing to strike down the law’s individual mandate, but later changed his mind after some horse-trading that went on behind the scenes. (RELATED: Forthcoming Biography Reveals New Details Of Roberts’ Obamacare Vote)

Two years earlier, the Roberts Court was forcefully called out by President Barack Obama during his State of the Union address after its ruling in Citizens United v. FEC, which struck down several campaign finance laws in the U.S. Soon after, Obama and frustrated liberals began to accuse the Roberts Court of acting as partisans and harming the institution.

Last year, in the case of Trump v. Hawaii, Roberts upheld President Trump’s polarizing travel ban in a 5-4 decision. Despite siding with the administration, Roberts made sure to question Trump’s motivation in his opinion, but ultimately decided that it was an administrative decision that was beyond the court’s reach.

“Plaintiffs argue that this President’s words strike at fundamental standards of respect and tolerance, in violation of our constitutional tradition,” Roberts wrote, upholding what critics have decried as a Muslim ban. “But the issue before us is not whether to denounce the statements. It is instead the significance of those statements in reviewing a Presidential directive, neutral on its face, addressing a matter within the core of executive responsibility.” 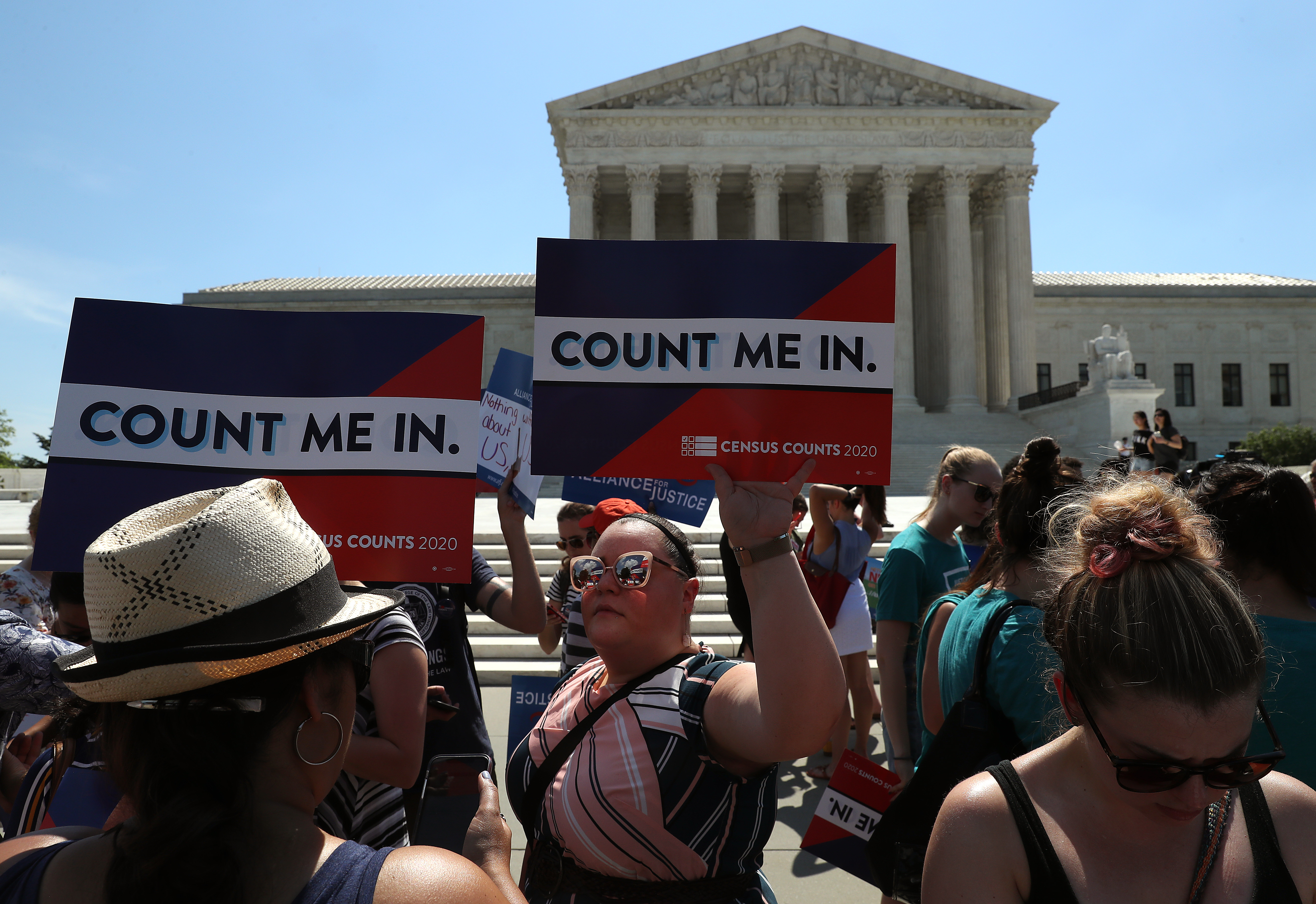 WASHINGTON, DC – JUNE 27: People gather in in front of the U.S. Supreme Court as decisions are handed down on June 27, 2019 in Washington, DC. The high court blocked a citizenship question from being added to the 2020 census for now, and in another decision ruled that the Constitution does not bar partisan gerrymandering. (Photo by Mark Wilson/Getty Images)

But, last week Roberts threw another change-up, seemingly forgetting the deference he had showed the executive branch a year earlier. In Department of Commerce v. New York, Roberts joined the court’s liberals to author a 5-4 opinion, slapping down the Trump administration’s decision to put a citizenship question on the 2020 Census, because he questioned the administration’s motivations for listing the question, a complete reversal from the logic used to justify his Hawaii decision.

Levy compared it to the chief’s Obamacare ruling, saying he tried to appease both sides of a highly contentious case.

“Roberts was looking for a way to do nothing,” Levy said. “He clearly didn’t want to do anything controversial.”

Roberts’ census ruling may have been an even more dramatic break from the court’s conservative wing than his Obamacare ruling was, given that it involved the judicial branch weighing in on how the executive branch conducts its constitutional duties. Because of this, some conservatives have even suggested that Trump should defy the high court’s ruling. Levy would not go that far, but understands others who would.

“You can make the argument that that’s the only way to fight back against lawless courts,” he said, but admitted “As a lawyer I don’t know that I’d advise a client to defy a court order, but it’s certainly tempting.”

Klukowski was not as equivocal, saying that defying a Supreme Court decision would set a “dangerous” precedent.

“That’s a dangerous path to go down,” Klukowski said.

The Future of The Supreme Court

Despite its unpredictable chief justice, the current court is the most conservative in modern history, and while there is plenty of cause for concern, there are reasons for hope for conservatives. Justices Clarence Thomas, Samuel Alito, and Neil Gorsuch are all staunch conservatives who have demonstrated strict adherence to the text of the constitution, exactly the type of judges conservatives have spent decades clamoring for. Those three justices have demonstrated the willingness to break with the legal concept of stare decisis, and would likely be open to revisiting (and perhaps overruling) activist liberal precedent, including Roe vs. Wade, the landmark 1973 decision which legalized abortion nationwide.

“The Alitos, Thomases, and Gorsuches of the world don’t care what the elites think about them,” Levy said. “They don’t care about doing things that will lead to elites from condemning them.”

Justice Brett Kavanaugh just finished his first term on the court, and is still a bit of an unknown, but he has aligned himself with the court’s more conservative justices thus far. (RELATED: Brett Kavanaugh Finds Law Faculty Home After Bitter Confirmation)

“We have three, maybe four solidly conservative justices,” Levy said. “But we don’t have five.”

Klukowski said that he viewed Kavanaugh as being closer to the trio of Thomas, Alito, and Gorsuch than Roberts.

“This term was a major step in the right direction,” Klukowski said.

Klukowski specifically noted the chief’s ruling in Rucho v. Common Cause, where Roberts wrote a 5-4 opinion for the conservatives, declaring that partisan gerrymandering is an issue outside the court’s jurisdiction.

While he largely views Roberts as a disappointment, Levy also says the court’s current make-up reflects the strides the conservative legal movement has made over the past several decades, even if the court still lacks a solid conservative majority.

“You’re not gonna always get it right,” Levy said about picking judges, but noted, “we’ve come a long way from when a Stevens or Souter could be nominated,” referring to former Justices John Paul Stevens and David Souter, who were both nominated by Republican presidents but ended up becoming leaders of the court’s liberal wing.

Despite Roberts’s apparent aversion to the court being perceived as political, the politics of the Supreme Court has never been more transparent. The chief justice and the president have repeatedly clashed. From the census question, to slow-playing the DACA ruling (which is expected to be a slam dunk in favor of the administration), to refusing to rein in brazenly activist judges on the lower courts, the chief justice appears to be trying to shape the court in a way that attracts the least amount of scrutiny possible.

During the heated 2016 presidential campaign, then-candidate Trump repeatedly used Roberts as a whipping boy and the epitome of a failed political establishment in Washington D.C, ripping him for his Obamacare rulings, and saying he never should have been nominated to the role of chief justice. After Trump chastised an “Obama judge” for ruling against his administration’s authority to block asylum claims from illegal immigrants, Roberts took the rare step of rebuking a sitting president.

“We do not have Obama judges or Trump judges, Bush judges or Clinton judges. What we have is an extraordinary group of dedicated judges doing their level best to do equal right to those appearing before them,” Roberts said. “The independent judiciary is something we should all be thankful for.”

Always one to get the last word, Trump fired back, and did not mince his words.

“Sorry Chief Justice John Roberts, but you do indeed have ‘Obama judges,’ and they have a much different point of view than the people who are charged with the safety of our country,” Trump said.

U.S. President Donald Trump (R) talks with U.S. Supreme Court Chief Justice John Roberts as he departs after delivering his State of the Union address to a joint session of the U.S. Congress on Capitol Hill in Washington, U.S. January 30, 2018. REUTERS/Jonathan Ernst/File Photo

Some argue Chief Justice Roberts, who has lived and worked in the nation’s capital for decades, is the epitome of a swamp-dweller.

“From the mainstream media, academia, to Washington D.C. cocktail circuit, it’s the left-leaning elites that determine what’s socially acceptable,” Levy said. “That’s where all the pressure comes from.”

As the court has moved in a more conservative direction, liberal op-ed columnists and editorial boards have bombarded the internet, warning the chief justice that the high court dare not touch any cherished liberal precedents (especially ones involving abortion) or risk losing respect and legitimacy.

Roberts claims he simply calls “balls and strikes,” but some conservatives believe the way he has managed the court suggests he cares more about promoting the perception of judicial independence than the actual constitutional ramifications of his rulings.

With the almost unchecked power of the Supreme Court, Roberts has positioned himself as the most powerful man in America, having a virtual veto over every polarizing policy that comes before his court.

This is now Roberts’ court, and in many ways he’ll have the opportunity to mold the country in his own image. How Roberts will handle these awesome responsibilities remain to be seen, but it’s clear that the court’s recently-completed term has many conservatives on edge.