Quotes of the Day:

Jordan Uhl, campaign director, Media Matters: “Dan Bongino, the most fragile person on TV & who name-searches on here after TV appearances (Hey, go fuck yourself Dan!), just had a meltdown after @JohnnyAi pointed out how many people cops kill annually Dan didn’t have a rebuttal, so he just yelled & threw a temper-tantrum.”

Dan Bongino, host of”The Dan Bongino Show” podcast and a Fox News contributor, replied with gratitude (however fake): “My fiery debate about the police being asked to leave a Starbucks. H/T lib-troll @JordanUhl for the clip. More on my podcast today.”

(RELATED: Dan Bongio (Mad F-Bomber) Accuses Me Of Being A Clown)

On Monday Rep. Swalwell dropped out of the presidential race for 2020.(RELATED: Swalwell’s presidential hopes bite the dust)

Mood: “The biggest liars on Earth are people who say they reread their favorite novel every year.” — Ben Dreyfuss, editorial director, Mother Jones. 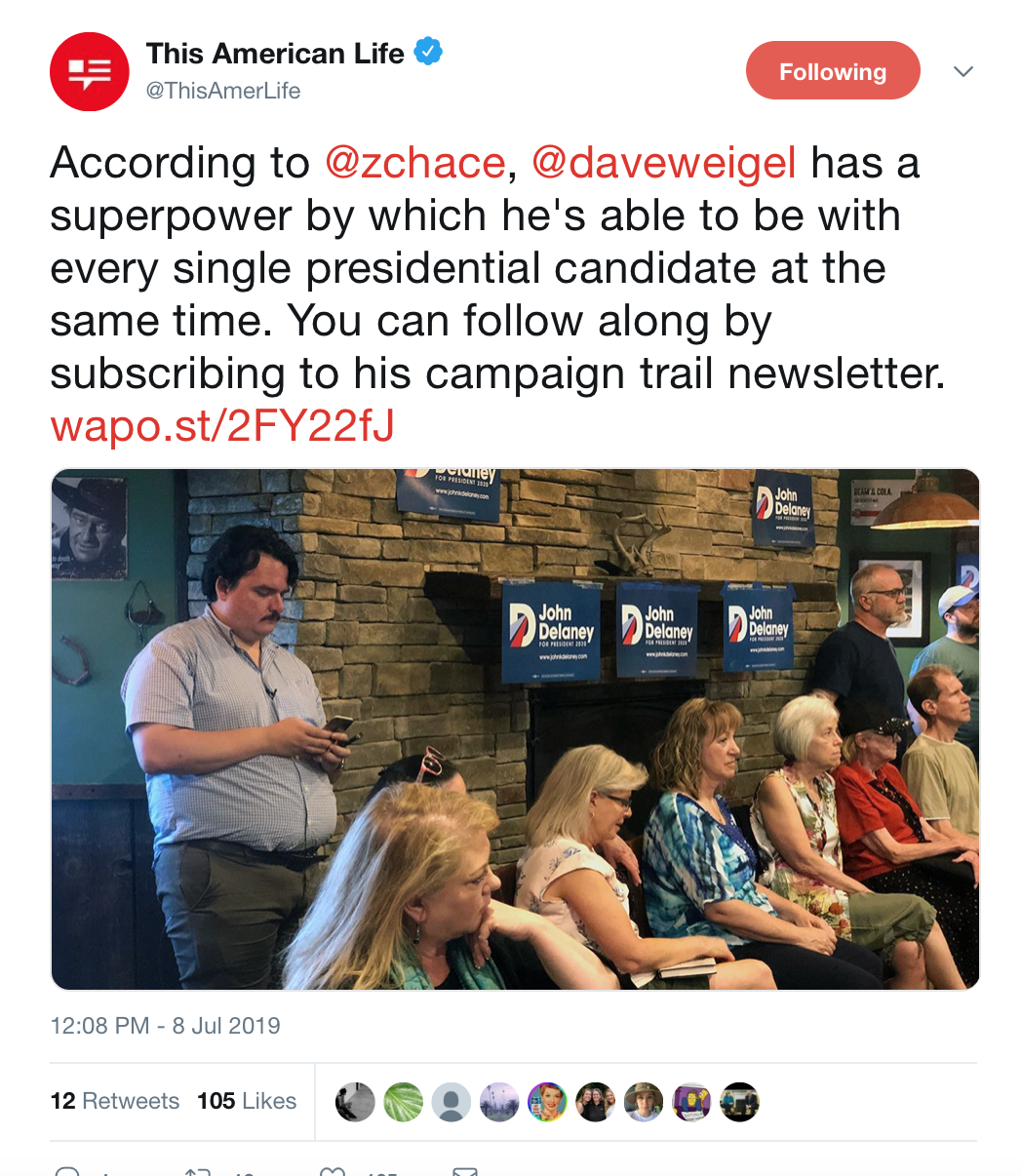 MSNBC’s Kasie Hunt slaps back viewer who calls her ‘fat’

A male viewer asked, “Why is @kasie GETTING SO FAT?”

CONVO BETWEEN A JOURNO AND A LEGAL EXPERT

Stephanie Ruhle, host, MSNBC: “Why would Epstein have kept this stuff? Did he have NO fear whatsoever?”

Mimi Rocah, former prosector, SDNY, MSNBC legal analyst: “In my experience, child sexual predators do not stop. Especially when they get a slap on the wrist when caught the first time.”

“Oh you have to be Fucking kidding me.” — Mollie Jong-Fast, author, contributor, The Bulwark, reacting to President Trump declaring the U.S. as a a “leader” on environmental issues.

Morning Joe showcases the same guests they’ve had for years

“This person is not well. He is spouting nonsense. He is making up stories and thinks we’re going to believe it’s a credible version of reality. Where’s his family to perform an intervention? Where is his staff? Where are patriotic Americans in a position to stop this danger?” — Steven Beschloss, writer, filmmaker, and former editor of The Ritz Carlton Magazine.

“This is bullshit. I’d like to know how many Washington Post editors come from families that once owned slaves.” — TheBlaze Media‘s Chris Pandolfo in reaction to WaPo writing a story that Senate Maj. Leader Mitch McConnell‘s family owned slaves and opposes slavery.

He was answering the question, “What’s the first major news event you remember in your lifetime?”

“JonBenét Ramsey murder. She was only a few months older than me and I remember being freaked out and was scared to go into basements for a few years after that.” — Cameron Cawthorne, Washington Free Beacon.

Journo is juiced about getting a blue checkmark

“I’d like to thank everyone who helped me get my blue checkmark, an important milestone toward my personal goal of getting free airfare whenever I complain about a delayed flight.” — Jeremy Boreing, self-described co-founder, COO and “god-king” of The Daily Wire.

Fluent in Thai? This could be the job for you.

Hello, I’m looking for someone to support me in the @TwitterSG office. If you have PR agency and/or in-house experience, fluent in Thai & English, and are passionate about Twitter; give it a shot.” — Cipluk Carlita, communications, Twitter.

Another good reason why selfies are stupid and embarrassing. Pamplona, a man and a bull. Things did not go well. Here.

Some D.C. drivers had to SWIM to safety on Monday. WTF. Here.

Rudy Giuliani says Michelle Obama’s behavior toward Biden was cruel: “Michelle Obama’s failure to defend Joe Biden against charges of racism was cruel. The Obamas owe Biden a defense against false charges. Biden’s actions in Ukraine and China and his intellect are real issues. Racism is not. This is like the Obama race attack on Bill Clinton.”

The New Yorker teaches idiots how to smear the right amount of cream cheese on their bagels. Here.