Democratic Reps. Ayanna Pressley, Alexandria Ocasio-Cortez, Rashida Tlaib and Ilhan Omar, known as “the squad,” held a press conference Monday to discuss President Donald Trump’s tweets that told them to go back to their own countries.

Trump tweeted Sunday that “‘Progressive’ Democrat Congresswomen” should “go back and help fix the totally broken and crime infested places from which they came. Then come back and show us how it’s done.” The tweets sparked outrage among Democrats, particularly “the squad,” whom the tweets were likely about.

Shortly before the press conference, Trump tweeted that the four congresswomen are “anti-Israel, pro Al-Qaeda.” He has continued to defend his remarks despite pushback from Democrats and Republicans.

“I will always refer to him [Trump] as the occupant as he is only occupying space,” Pressley of Massachusetts said at the presser. “He does not embody the grace, the empathy, the compassion, the integrity that that office requires and that the American people deserve.”

“Our squad is big. Our squad includes any person committed to building a more equitable and just world,” Pressley continued.

Omar of Minnesota took a more aggressive stance against the president, calling him out for alleged human rights abuses at the border. He is allowing “millions of Americans to die from a lack of health care,” she said, referring to Trump’s agenda as that of “white nationalists.”

“Right now the president is committing human rights abuses at the border, keeping children in cages, and having human beings drinking out of toilets,” Omar said Monday. “This president, who has been credibly accused of committing multiple crimes, including colluding with foreign government to interfere with our election.”

Ocasio-Cortez of New York stepped up to the podium next, announcing that Trump “violates international human rights” by taking “thousands of children away from their families.”

“And so we’ll stay focused on our agenda, and we won’t get caught slippin’, because all of this is a distraction,” Ocasio-Cortez said Monday. “It’s a distraction from what’s most important and from our core values as American citizens.” 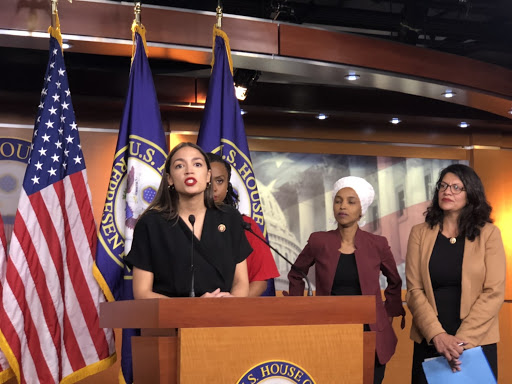 Alexandria Ocasio-Cortez also addressed the president’s tweets, stating that the four will not “get caught slippin’.” (Photo courtesy of Henry Rodgers)

Last up was Tlaib of Michigan, who thanked her “sisters in service.” Tlaib said Trump’s comments were a “continuation of his racist xenophobic play book” and that she supports impeachment of the president.

“This means supporting an impeachment inquiry of this president and his actions by the administration and his appointees,” Tlaib said. “Sadly, this is not the first nor will it be the last time we hear disgusting bigoted language from the president. We know this is who he is. And we know that he and his administration are constantly engaged in actions that harm residents and American people in our country.”

“The squad” then took questions from reporters. One asked Omar about the recent comments by Trump that she is a Communist and pro al-Qaeda. Omar said she would not dignify it with a response. (RELATED: Ilhan Omar Blows Off Al-Qaeda, Mocks Americans For Fearing Them In Recently Surfaced Video)

“And so I will not dignify it with an answer, because I know that every single Islamaphobe, every single person who is hateful, who is driven by an ideology of other-ing as this president is, rejoices in us responding to that,” Omar responded.

This president operates in complete bad faith. He does not operate in good faith, and so that’s one thing. But second to the previous question as well, weak minds and leaders challenge loyalty to our country in order to avoid challenging and debating the policy. He [Trump] does not know how to defend his policies. So what he does is attack us personally. And that is what this is all about.