With the recent launch of Ruger’s Custom Shop, we wondered what would be rolling out the door. It didn’t take the new operation long to turn their sights on Ruger’s 55-year-old rimfire classic, the 10/22.

What emerged was the 10/22 Custom Competition with upgrades and refinements we haven’t seen in previous 10/22 models at an MSRP of $899. 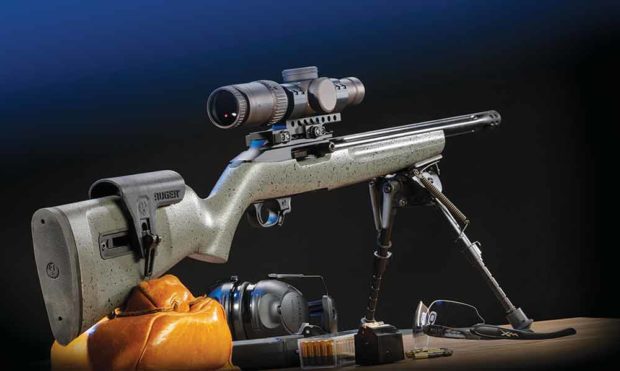 Tool For The Times

The timing of the introduction couldn’t be better. Rimfire competition is exploding in popularity with some great new tactical, precision rifle and silhouette games in play. Since many of them adhere to strict time limits, an accuracy-tuned, semi-auto is a decisive advantage. It’s the perfect competitive instrument to put you in the winner’s circle.

My go-to 10/22 has been the snappy looking, stainless steel, bull barrel Target Model. I’ve liked its looks, its weight and — fed Aguila Rifle match ammo — its ability to knock out 1″, 5-shot groups at 100 yards. Yet, compared to the new Custom Competition model, it’s a big, stolid beast while the new Ruger guy on the block is lithe and lively.

There’s a dynamic to the new model. With its 16.12″ fluted and compensated barrel, an overall length of 36″ and a weight of 6 lbs., it feels dynamic in your hands. You could simply say it’s a “well-balanced package,” but there’s so much more.

The weight of the Custom Competition is equally distributed between your pistol grip hand and your forward hand. When you shift the gun left or right, you don’t have to stand there and wait for the barrel to arrive. It’s there — immediately. This subtle “pointability” makes all the difference when seconds count. Ruger’s Custom Shop got it right.

Adding to the dynamic is its highly textured stock with “grippy” hand grooves radiused into both sides of the forearm and a fully adjustable cheek rest, which can be fine-tuned, horizontally and vertically — even reversed — to accommodate a variety of optics and faces to provide a stable and repeatable cheek weld for the competitive shooter. 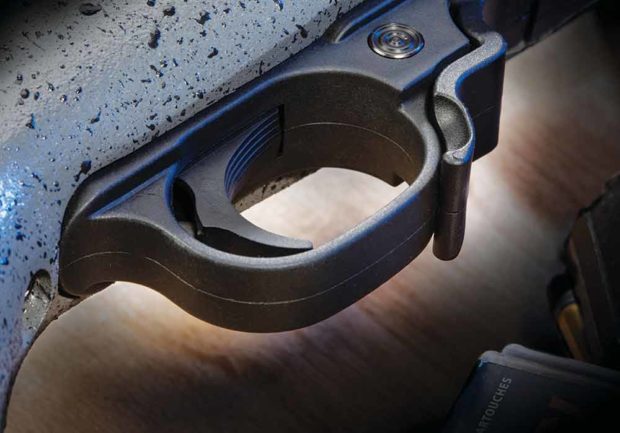 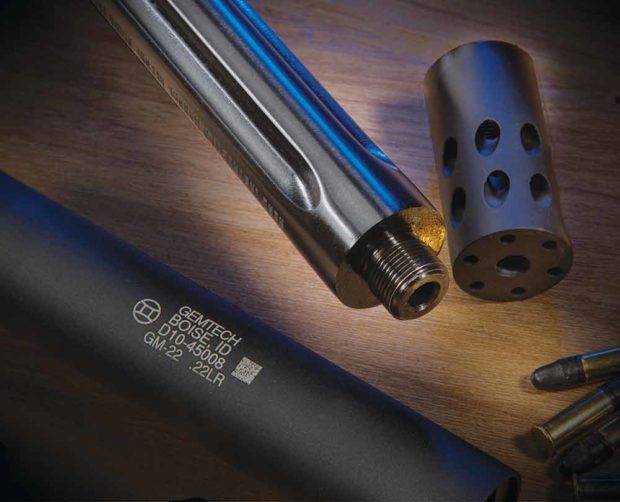 Threaded muzzle? Of course! Swap out the factory muzzlebrake for a Gemtech suppressor if that’s your pleasure. 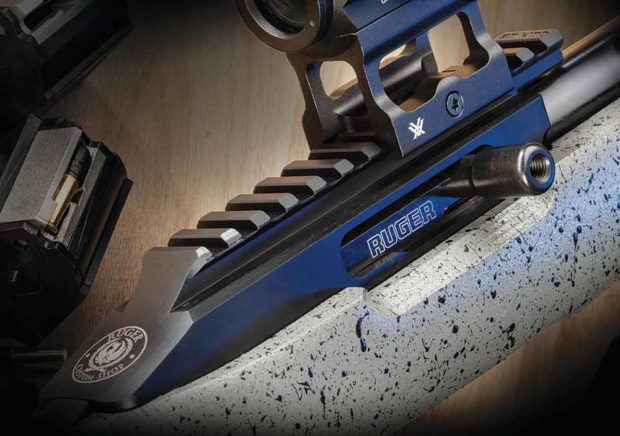 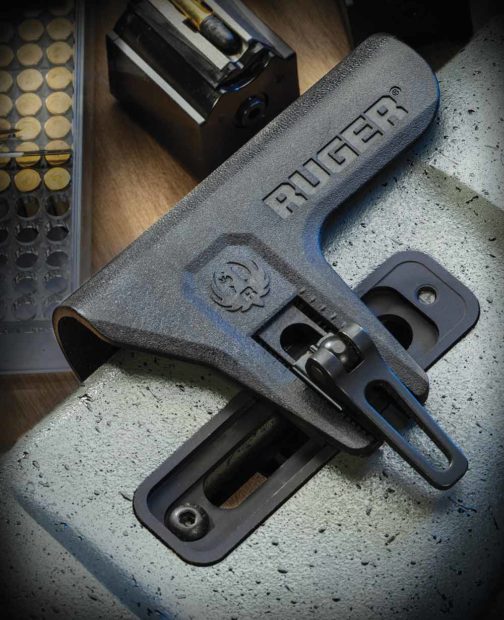 The highly textured stock features fully adjustable cheek rest that can be fine-tuned to accommodate a variety of optics and provide the perfect cheekweld.

Taking a closer look at the features built into the new gun, there’s Ruger’s pace-setting BX-Trigger system. The BX-Trigger is not new this year but it takes any old 10/22 model and moves it into an entirely higher performance plane.

Owner-adjustable from 2.5-3 lbs., it’s light, crisp with minimal overtravel, a positive reset and, yes, it’s a drop-in module fitting all existing 10/22s and 22 Charger pistol models. As an accessory, it’s available directly from Ruger for $89.95 at www.ruger.com — and it’s worth every penny.

The receiver itself has received a makeover. No longer is the Picatinny rail a Ruger bolt-on accessory. The new, optics-ready Picatinny rail is now cast and machined integrally with the receiver for utter rigidity. Moreover, the rail is 30 MOA, giving the shooter increased long-range elevation adjustments with their optics. This is important in the typical tactical rimfire match where steel targets are often placed out beyond 100 yards.

The custom receiver action has also been tweaked a bit to increase better stock bedding with the addition of a secondary, rear bedding lug visible at the rear of the receiver. The fluted bull barrel is fully free-floated in the stock and features an enhanced match quality chamber.

Since competitive events often call for rapid magazine changes and reloads, the custom shop has added an extended, ambidextrous magazine release to the BX-Trigger assembly. The release wraps around the front of the trigger guard and can be operated rapidly with the trigger hand. When the release is pulled down, those 10-round Ruger magazines just shoot out. With no magazine hang-ups, it’s a neat design giving the competitor yet another slight edge. 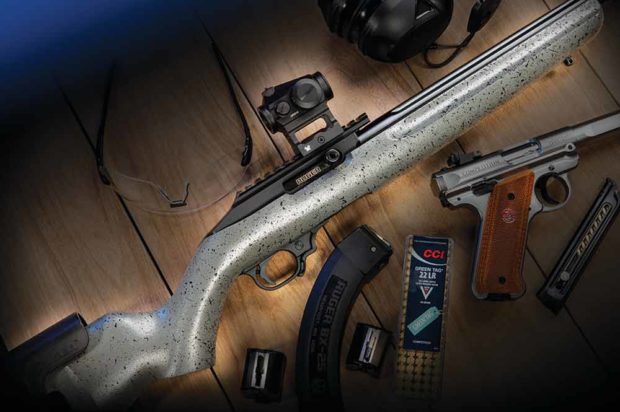 CCI claims the new poly coating virtually eliminates traditional lead and copper barrel fouling while cutting lead buildup in suppressors by 60 to 80 percent. I couldn’t wait to try their “Clean-22” in Ruger’s new Custom Competition, so it was off to the range.

Running 14 different loads through a rifle at 50 yards was eye opening — all the five-shot groups measured under an inch! The most accurate combinations were CCI Standard Velocity (0.45) and CCI Mini-Mag (0.46).

And CCI’s new Clean-22 brand? They’re clean, but they lost out to their conventionally lubricated cousins with a 0.81 Blue group and a Red cluster of 0.92.
The results prove once again every .22 is a law unto itself when it comes to ammunition compatibility.

After working with Ruger’s new 10/22 Custom Competition, I can assure you this rimfire will prove as handy in the squirrel woods as it will be a commanding force in the tactical rimfire matches.

Click here to get GUNS Magazine delivered to your door.