A retired FBI official testified Wednesday that a former business partner of Michael Flynn asked him in 2016 if he still had access to classified bureau files that prosecutors allege were to be used for a project on behalf of the Turkish government.

Appearing as a government witness, the former official, Brian McCauley, also said that Flynn’s ex-partner, Bijan Rafiekian, wanted to keep its lobbying activities “under the radar” and sought to avoid registering as a foreign agent of Turkey.

McCauley, who retired as a top official overseeing the FBI’s international operations in 2015, worked as a contractor for Flynn’s defense intelligence firm, Flynn Intel Group (FIG). Rafiekian was a top executive at the firm.

FIG inked a $600,000 contract with Dutch-Turkish businessman Ekim Alptekin in August 2016 to investigate Fethullah Gulen, a Muslim cleric living in exile in the U.S. Alptekin served at the time as chairman of the Turkey-U.S. Business Council, a Turkish trade group with close ties to the Turkish government.

Prosecutors initially planned to call Flynn, a former Trump national security adviser, as a witness in the case, but reversed course on July 3. They now consider Flynn to be a co-conspirator in the case, but the retired lieutenant general struck a plea deal with the special counsel’s team that required him to cooperate with an investigation into FIG’s foreign lobbying activities.

Prosecutors allege that Alptekin hired FIG through a Dutch shell company he owned called Inovo BV in order to mask any Turkish links to the Gulen project.

FIG listed Inovo BV as its client in lobbying disclosure forms filed with Congress, but did not identify Alptekin as the company’s owner. The Daily Caller first revealed Alptekin’s link to Inovo BV on Nov. 11, 2016, three days after Flynn published a peculiar op-ed in The Hill that portrayed Gulen as a terrorist and called for his extradition from the U.S. (RELATED: EXCLUSIVE: Michael Flynn Is Lobbying For Obscure Dutch Firm With Links To Turkish Government) 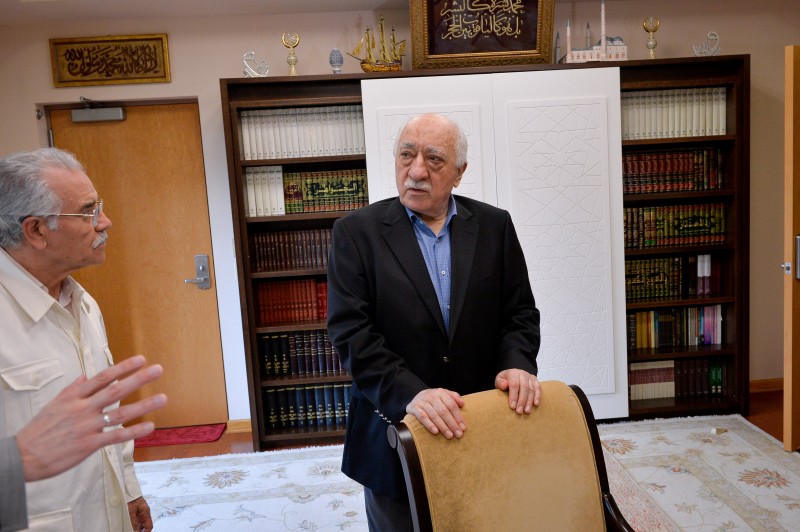 U.S.-based Turkish cleric Fethullah Gulen (C) speaks with his doctor and spokesperson after an interview at his home in Saylorsburg, Pennsylvania, U.S. July 10, 2017. REUTERS/Charles Mostoller

The article was in line with the views of Turkey’s president, Recep Tayyip Erdogan, who has accused Gulen of masterminding the failed July 15, 2016 coup attempt against the Turkish government.

As a FIG contractor, McCauley took part in an investigation of Gulen and also appeared alongside Flynn, Kian, and Alptekin at a Sept. 19, 2016 meeting in New York City with two top-ranking Turkish government officials.

McCauley testified that prior to the meeting, Kian asked him if he had access to classified FBI materials on Gulen, Politico reported.

“He asked me if I had access to records against Gulen … FBI classified records,” said McCauley, according to Politico.

McCauley said he told Kian he no longer had access to FBI files because he was retired.

Kian also wanted McCauley to conduct surveillance of Gulen supporters in the U.S., but the former FBI official said he rejected the request. (RELATED: Who Is Spying On Turkish Journalists In The US?)

McCauley also said that while Flynn, his longtime friend, suggested that FIG should register with the Justice Department as foreign agents of Turkey, Kian balked at the idea.

“The General wants me to file with DOJ, but I have a better idea,” McCauley recalled Kian telling him, according to Politico, which had a reporter in the Virginia courtroom where Kian is being tried.

Kian said he wanted to register the lobbying work “under the radar” — through Congress or the Commerce Department — “to avoid detection by Tony Podesta and other members of Congress who are favorable to Gulen.”

According to Washington Post reporter Rachel Weiner, McCauley said he disagreed with Kian, telling him that, “I wouldn’t fuck around with that.”

McCauley also said that Kian wanted him to meet with then-California Rep. Dana Rohrabacher “and tell him Gulen is a terrorist.”

“I refused to do that. Didn’t attend the meeting. Because there were no evidence that he was,” McCauley said of Gulen, according to journalist Sitki Ozcan.

McCauley also said that Alptekin, who remains in Turkey out of the reach of the U.S. government, was unimpressed with FIG’s investigation of Gulen and wanted the firm to “plant dirt” on the exiled cleric.

“When we presented our work about Gulen to Alptekin, he was dismissive. He said, ‘I know all these. I want dirt. Can you plant dirt?'” McCauley testified.

Michael Boston, a FIG employee, backed up much of McCauley’s testimony during his own stint on the witness stand Wednesday.

“He wanted us to box him as a terrorist, redefine him as a mullah,” he said.

According to Boston, “The ultimate goal of the project with Alptekin was to get a criminal referral against Fethullah Gulen, change his status in the U.S. and get him extradited.”

As part of its Aug. 9, 2016 agreement with Alptekin, FIG said it would utilize an “investigative laboratory” consisting of former FBI officials and intelligence officials to investigate Gulen and potentially make criminal referrals against him.

Prosecutors have also claimed that Kian and Alptekin took part in a kickback scheme that sent $80,000 to Alptekin. Alptekin paid a total of $520,000 to FIG through three wire transfers and received two payments of $40,000 within days of two of the wires.

Kelner, the former Flynn attorney, testified Tuesday that Kian asked him to change references to the payments as consulting fees to Alptekin. He instead wanted them characterized as refunds.

Alptekin said to the Daily Caller News Foundation in March 2017 that the two payments were refunds for unperformed lobbying services. Alptekin also told the DCNF he had no involvement in the Flynn op-ed and that he would have recommended against publishing it if asked. But emails cited by prosecutors show that Alptekin made recommendations and edits to the op-ed before it was published.