The revelation of that new lobbying contract, which has not been previously reported, raises several questions given that Trump is said to be considering Flynn, the former director of the Defense Intelligence Agency (DIA), to take over as either Secretary of Defense or National Security Advisor.

Flynn wrote an op-ed for The Hill on Tuesday, just before Trump’s stunning upset of Hillary Clinton, in which he heaped praise on Erdogan and called on the next president, whoever that would be, to accede the Turkish government’s request to extradite the U.S.-based Muslim cleric Fethullah Gülen back to Turkey. (RELATED: Here Is A List Of People Donald Trump Is Considering For White House Jobs)

“Gülen’s vast global network has all the right markings to fit the description of a dangerous sleeper terror network,” Flynn wrote in the op-ed, in which he called Gulen a “shady Islamic mullah” and “radical Islamist.”

Islamic preacher Fethullah Gulen is pictured at his residence in Saylorsburg, Pennsylvania (REUTERS)

Erdogan has accused Gülen, who has lived in exile in Pennsylvania since 1999, of masterminding a violent coup in Turkey in July. Gülen has denied doing so, but Erdogan has pressured President Obama to review evidence that the 76-year-old imam was behind the uprising, which left nearly 300 soldiers and civilians dead.

The piece does not include a disclosure that Flynn Intel Group, the consulting firm that Flynn founded in Oct. 2014, just after leaving DIA, was recently hired to lobby Congress by a Dutch company called Inovo BV that was founded by a Turkish businessman who holds a top position on Turkey’s Foreign Economic Relations Board.

A review of Dutch business records shows that the company was founded by Ekim Alptekin, an ally of Erdogan’s who is director of the Turkey-U.S. Business Council, a non-profit arm of Turkey’s Foreign Economic Relations Board. Members of the Foreign Economic Relations Board are chosen by Turkey’s general assembly and its minister of economy. In the role, Alptekin helped coordinate Erdogan’s visit to the U.S. earlier this year.

A lobbying disclosure report filed with Congress lists Inovo BV’s address but not the name of anyone affiliated with the company. There is also little information about the firm online. But The Daily Caller tracked down Dutch business registration records which show Alptekin founded the company in 2005. The financial consulting firm, which Alptekin does not acknowledge on his bio, also has an affiliate, Inovo Turkije.

The lobbying disclosure does not say how much Inovo BV is paying Flynn’s firm. It lists former congressional aide Robert Kelley as the lobbyist who is handling the contract and says that he is working on “organizational consulting” for Inovo BV.

Flynn’s recent op-ed appears to be at odds with some of his past comments about Turkey and its role in the war against ISIS. In the op-ed he refers to the Islamic nation, which is a member of NATO, is “vital to U.S. interests” and is the U.S.’s “strongest ally” against ISIS.

But he told journalist Seymour Hersh for an article published earlier this year that Turkey was doing little to stop foreign fighters and weapons from crossing the border into Syria.

“We understood ISIS’s long-term strategy and its campaign plans, and we also discussed the fact that Turkey was looking the other way when it came to the growth of the Islamic State inside Syria,” Flynn told Hersh for the article.

It is unclear whether the Trump administration will side with Erdogan on the Gülen issue. The men were allies until recent years, when some of Gülen’s followers, called Gülenists, opened corruption investigations of some of Erdogan’s government allies.

Erdogan has since then assailed Gülen and his network, which he refers to as a “parallel government” because Gülen’s followers are scattered throughout Turkey’s judiciary, police force and military.

The tension peaked in July when a group of mid-level Turkish military officials attempted to overthrow the government in a battle that hit several of Turkey’s major cities, including Ankara, the capital, and Istanbul.

Erdogan immediately blamed Gülen. And though the mysterious cleric denied any involvement, Erdogan began to pressure the U.S. to return him back to his homeland to face charges pending against him. While the State Department has said it is reviewing evidence presented against Gülen, the Obama administration has appeared less than eager to extradite him. 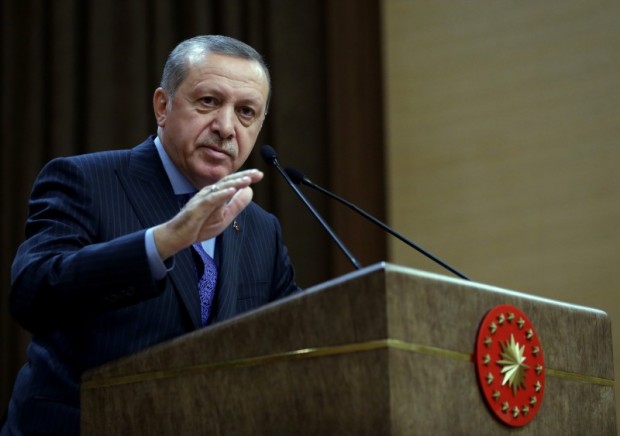 In a statement to TheDC, Gülen’s lawyers said they hoped that Flynn’s op-ed is not indicative of the Trump administration’s position towards the cleric.

“We hope that Mr. Flynn’s op-ed on Mr. Gülen and Turkish-American relations, published before the results of the election were known, is not a statement of policy for President-Elect Trump,” Gülen’s legal team at the Washington D.C. firm Steptoe & Johnson told TheDC.

Turkish diplomatic sources tell TheDC that they “are pleased” that one of Trump’s top advisers “is aware of the danger that Fetullah Gulen and his terrorist organisation” pose to Turkey.

“Our main expectation is still that Fetullah Gülen is extradited to Turkey as soon as possible,” said a source with the Turkish embassy.

Michael Rubin, a resident scholar at the American Enterprise Institute and a former Pentagon official, criticized Flynn’s op-ed in a post at the think tank’s website on Thursday.

He asserted that “regardless of what Erdogan says publicly,” intelligence exists which shows that Erdogan supports ISIS and al-Qaeda affiliates operating inside Syria.

“That makes Turkey a source of instability in the region, not its remedy,” Rubin writes, also noting that Erdogan has embraced leaders of the terrorist group Hamas.

“Should Gülen he be extradited? If Turkey can provide proof of his involvement in the events of July 15, then yes,” Rubin says. “But almost four months after the coup, Turkish authorities have failed to provide the United States with anything other than accusations and demands.”

The Trump campaign did not respond to a request for comment. Nor did Flynn Intel Group.

As for Alptekin, he appears to be on board the Trump train.

In an interview with CNN’s Turkish franchise, he said that he believes Trump will be good for U.S.-Turkish business relations. He also referred to Flynn’s op-ed.

And on Twitter, Alptekin is heavily critical of Gülen. In one tweet, he compared the cleric to bin Laden, similar to Flynn’s rhetoric in his op-ed. In other tweets, Alptekin has praised Trump. In September, he wrote that a Trump presidency will be a boon to U.S.-Turkey relations. And in a post from the day after Trump’s election shows him standing next to a cardboard cutout of the president-elect.