Russia received some rare good economic news last week. China lifted restrictions on Russian soybeans imports, paving the way for Moscow to increase its sale of the crop to Beijing at time when Chinese leadership is trying to lessen its reliance on American farmers.

Additionally, in a historic first, the dollar’s share in payments for Russian exports to China fell below 50 percent.

With trade tensions between the United States and China remaining high, Moscow sees an opportunity for economic gains at Washington’s expense. In response to Beijing’s tariffs on several American goods, Russia is positioning itself as an alternative supplier of them. Whereas the Trump administration has sanctioned Huawei, Russia has embraced the Chinese telecom giant with open arms. Finally, Russia is courting China with growing success to join it in moving away from the dollar.

Expanding economic ties with China is a long-time priority for the Kremlin. After the West cut back on economic ties with Russia over its 2014 annexation of Crimea, Moscow turned to Beijing as an economic alternative. Over the past several years, Russia’s pivot to China has generated some notable deals such as a $400 billion gas pipeline contract. Annual trade between the two countries reached $108 billion in 2018 and China is now Russia’s largest trading partner. (RELATED: Behind The Growing Rift Between Russia And Iran)

At the same time, Russia ran into some problems. Many Chinese banks and companies, which had extensive business interests in the United States, showed reluctance to deal with Russia out of a fear of finding themselves sanctioned by Washington. Additionally, the growing economic gap between the two countries has made it difficult for Russia to do business with China on equal terms. 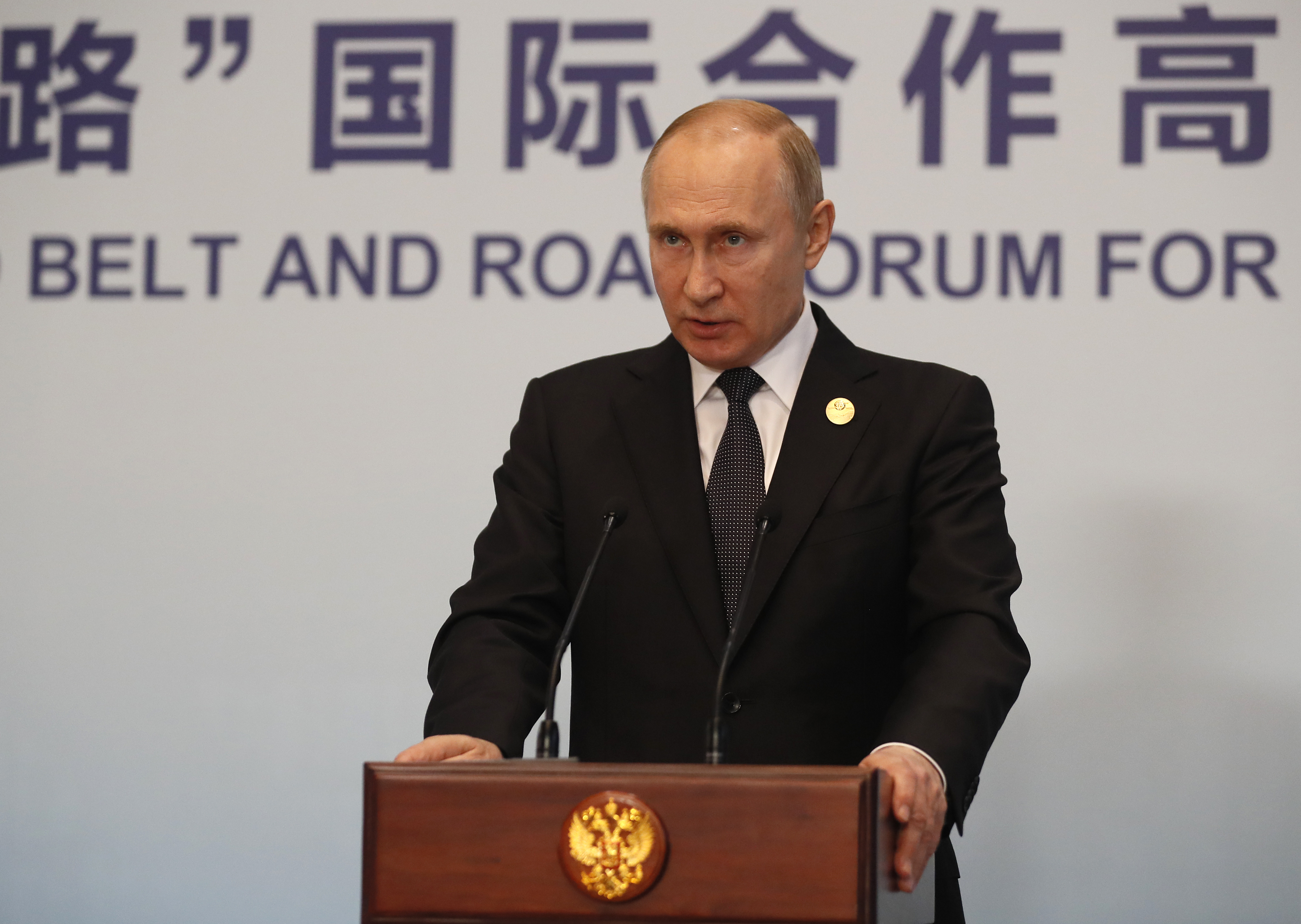 Russia’s President Vladimir Putin speaks during a press conference on the sidelines of the final day of the Belt and Road Forum in Beijing on April 27, 2019. (Photo by Sergei ILNITSKY/AFP/Getty Images)

However, now that China finds itself under growing U.S. pressure, the Kremlin is attempting to show Beijing that it can be an indispensable partner. Speaking at the St. Petersburg International Economic Forum in June, Russian President Vladimir Putin took aim at the Trump administration’s trade policy towards China.

Russia’s support for China in the trade war with the United States goes beyond words. As the Trump administration has imposed tariffs on a growing range of Chinese goods, Beijing has responded with its own counter-tariffs targeting American imports such as soybeans, pork, and liquified natural gas (LNG).

With China pushing American producers in these industries out of its market, Russian companies are stepping in to try help fill the void.

One area where Beijing is increasingly turning to Moscow amidst trade tensions with the United States is agriculture. Last year, Russia exported $3.21 billion worth of agricultural products to China, a 51.3%increase from 2017. Russia is experiencing a particular boon to its sale of soybeans, a crop that China has traditionally relied on American farmers for. Soybean exports from Russia to China increased by 64.7% between 2017 and 2018. (RELATED: Saudi Arabia Is Quietly Cozying Up To Russia: What Does It Mean For The Middle East?)

Russia is hoping to further capitalize on China’s need for new suppliers of agricultural goods by selling Beijing farmland. Last August, Russia announced that it was prepared to offer 2.5 billion acres of arable land in its Far Eastern regions to foreign investors. The move was aimed first and foremost at Beijing, with a top manager at a Russian state investment agency telling the South China Morning Post, “We expect most of the investment to come from China.”

Some Chinese companies are taking Russia up on its offer. Chinese company Joyvio Beidahuang Agricultural Holdings (JBA) is in the process of acquiring 50,000 hectares (125,553 acres) in Russia’s Primorsky Krai for soybean cultivation. Once the deal is completed, JBA will become one of the largest landowners in the region.

Russia and China’s economic cooperation is not limited to natural resources. The two countries are increasingly working together on technology, a development which threatens to undercut U.S. efforts to maintain its preeminence in this area. 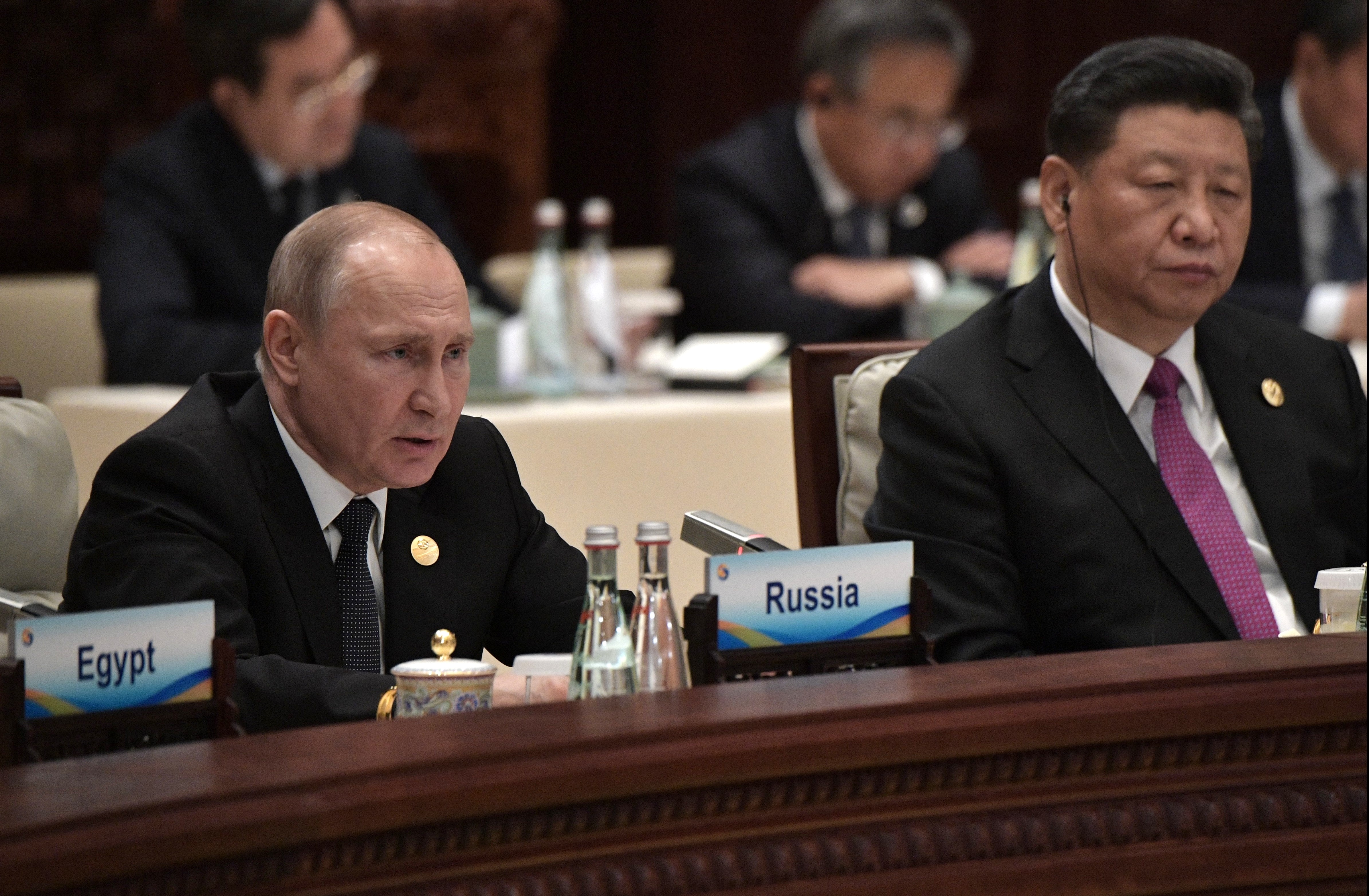 Russia’s President Vladimir Putin (L) speaks as China’s President Xi Jinping (R)looks on during a roundtable summit session on the final day of the Belt and Road Forum in Beijing on April 27, 2019. – Chinese President Xi Jinping urged dozens of world leaders on April 27 to reject protectionism and invited more countries to participate in his global infrastructure project after seeking to ease concerns surrounding the programme. (Photo by ALEXEY NIKOLSKY/AFP/Getty Images)

At a time when the Trump administration is seeking to block Huawei from becoming a global leader in 5G technology, Russian firms are joining forces with the Chinese telecom firm. Huawei and Russian telecom company MTS recently formed a partnership to develop 5G technology in Russia. Over the course of next year, the two companies plan on launching 5G networks across the country.

Russia and China have long discussed reducing the use of the dollar in their trade as a way to weaken Washington’s ability to sanction them. However, negotiations about a formal agreement initially stalled due in part to China’s concerns about the volatility of the Russian ruble.

Nevertheless, the two countries are increasingly trading in their national currencies. Russian news website RBC reported last Friday that the dollar’s share in payment for Russian exports to China declined from 75.1% a year ago to 45.7% for the first quarter of 2019.

The role of dollar in Sino-Russian trade is likely to further decrease after Moscow and Beijing finally reached a deal on trading in rubles and yuans recently. According to the Russian newspaper Izvestia, Russian Finance Minister Anton Siluanov and Chinese People’s Bank head Yi Gang signed an agreement in early June that outlined a plan for transition for using national currencies in trade.

As the trade war between Washington and Beijing rages on, Moscow has concluded that it can get major gains by doubling down on its pivot to China. So far, this decision is paying off.