New York City’s $15 minimum wage, which began to take effect Dec. 31, 2018, was meant to bolster earnings and quality of life, but for a lot of residents, it’s doing the opposite.

Democratic New York Gov. Andrew Cuomo signed legislation in 2016 to increase the New York York State’s minimum wage to $15.00/hr. The lowest minimum wage in NY at the time was $9.60. NYC’s “big employers” (11 or more employees) were the first to be forced to increase minimum wage pay toward the end of 2018. The rest of NYC’s smaller-scale businesses won’t have to pay up until December of 2019, according to data on Cuomo’s website.

Cuomo claims to have created the bill with “the needs of workers and businesses alike” in mind, but a lot of business owners in the boroughs beg to differ. They say the extra money comes with an unforeseen cost: higher good prices, fewer working hours and layoffs.

“Many people working in the restaurant industry wanted to work overtime hours, but due to the increase, many restaurants have cut back or totally eliminated any overtime work,” Andrew Riggie, executive director of the New York City Hospitality Alliance, told Fox News. “There’s only so much consumers are willing to pay for a burger or a bowl of pasta.”

Roughly 77 percent of NYC restaurants have slashed employee hours. Thirty-six percent said they had to layoff employees and 90 percent had to increase prices following the minimum wage hike, according to a NYC Hospitality Alliance survey taken just one month after the bill took effect. 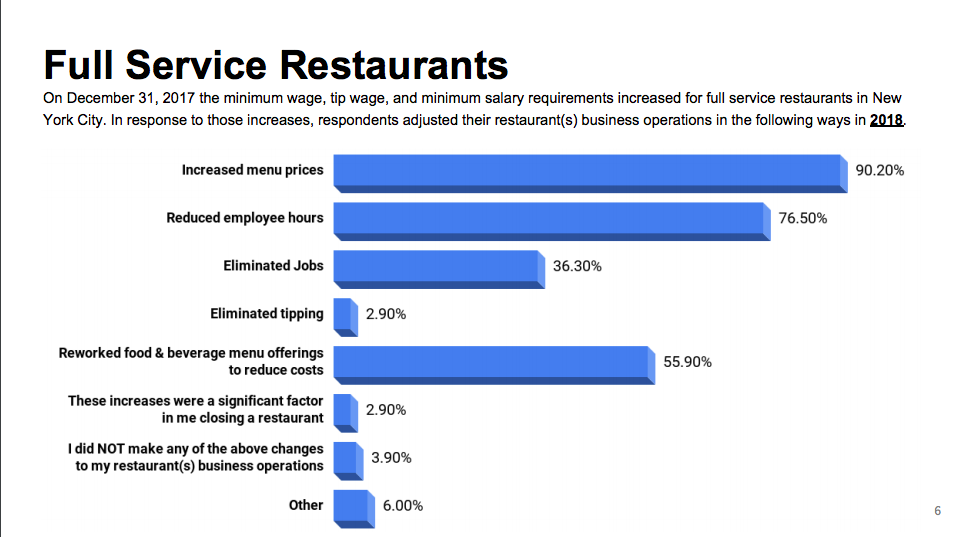 Only about 4 percent of survey respondents indicated that none of the above changes took place in their restaurants.

“What it really forces you to do is make sure that nobody works more than 40 hours,” Susannah Koteen, owner of Lido Restaurant in Harlem, told Fox News. “You can only cut back so many people before the service starts to suffer.”

NYC restaurants are taking hits from Cuomo’s push, but Washington doesn’t seem to have received the memo. The House passed the Raise The Wage Act in July, which mandated a nation-wide $15 minimum wage. The bill was later blocked by the Senate.

The bill would have effectively doubled the federal minimum wage of $7.25/hr. There is dismal 6 percent support for a nation-wide $15 wage hike among economists, according to Fox News surveys. (RELATED: Almost Three-Quarters Of Economists Say A $15 Minimum Wage Is A Bad Idea)

Cuomo’s office did not respond to a request for comment from the Daily Caller News Foundation by the time of publishing.