“Something that I certainly did not need to see was a photo of Jeffrey Epstein’s dead body. What is wrong with the Daily Mail?”

More Franks (my apologies) … “So is @foxnews not taking @realDonaldTrump’s remarks live? This is progress.”

MOOD: “Appreciate all the support but – truth is I should be better than the guys baiting me. This happens all the time these days. Often in front of my family. But there is a lesson: no need to add to the ugliness; I should be better than what I oppose.” — Chris Cuomo, CNN anchor, on losing his cool when a viewer baits him by calling him “Fredo.”

Mollie Hemingway, The Federalist: “I hope you and your employer also have a radical change of heart on your support of the harassment of individuals who don’t share your leftist political views.”

Eric Trump: “@ChrisCuomo If u want to condemn ugliness, u should do so across the board…I’ve been spit on, had white powder sent to my home & called much worse yet we hear crickets from @CNN. If you’re going to take the high road, great but you can’t just do it when it fits your narrative.”

Dana Loesch, conservative radio personality: “It should never happen in front of family, for either side. Everyone needs to extend some grace, whether it’s you to that Covington kid, for example, or others to you when you’re out with your family.”

Tomi Lahren: “Sorry but @ChrisCuomo has zero to apologize for. I don’t care where you work, what side of the aisle you’re on or who you are, NO ONE deserves to be bum-rushed and heckled. Total BS we expect public figures to stand there and take it.”

TOM ARNOLD HAS SOME NEWS FOR PRESIDENT TRUMP

“Nancy Tellem has the power to release thousands of hours of unseen unedited behind the scenes Apprentice Tape of Donald Trump, Don Jr, Eric Trump, Ivanka Trump & Jarad Kushner. Mark Burnett has covered up for his friend and business partner 20 years but America needs to see now.” — Tom Arnold, actor.

Trump goes off on Warren, Biden

HuffPost reporter goes off on Trump

Shannon Pettypiece, senior White House reporter, NBC News Digital: “Trump, on official visit to Shell Plant, re-ups his Pocahontas attack on Elizabeth Warren. ‘We will have to hit Pocahontas again if she does win… what a group Pocahontas and Sleepy Joe’ (This is a taxpayer-funded trip, not a campaign event)”

Jennifer Bendery, HuffPost: “Trump once again just casually being racist and hurtful toward Native Americans. As @RepDebHaaland has said, ‘An utter disgrace to carry on as Donald Trump has about a Native woman whose life was cut short in a terrible way.'”

“This is the third time in a month a package has gone missing because a company used USPS’ automated address correction DESPITE my note on order page and sent it to 123 North Street instead of 123 South Street. This is starting to get extremely irksome.”  — S.E. Smith, self-described “disgusting reporter” and deputy editor, Talk Poverty.

Presidential hopeful says he grew up ‘skinny’ and ‘Asian’

“I grew up a skinny Asian kid in upstate New York. I felt different most of the time. I remember that feeling and appreciate that people from different backgrounds each have a different set of struggles. It’s not easy for anybody. We’re all human.” — Andrew Yang.

“Excuse me for re-tweeting, but I am so full of myself after listening to a mere 30 seconds of this Women Who Travel podcast, there will be no living with me the rest of the day. @CNTraveler.”

Condé Nast Traveler talks to Carroll about her recent road trip in which she searched for the answer to the question, “What do we need men for?” Here. 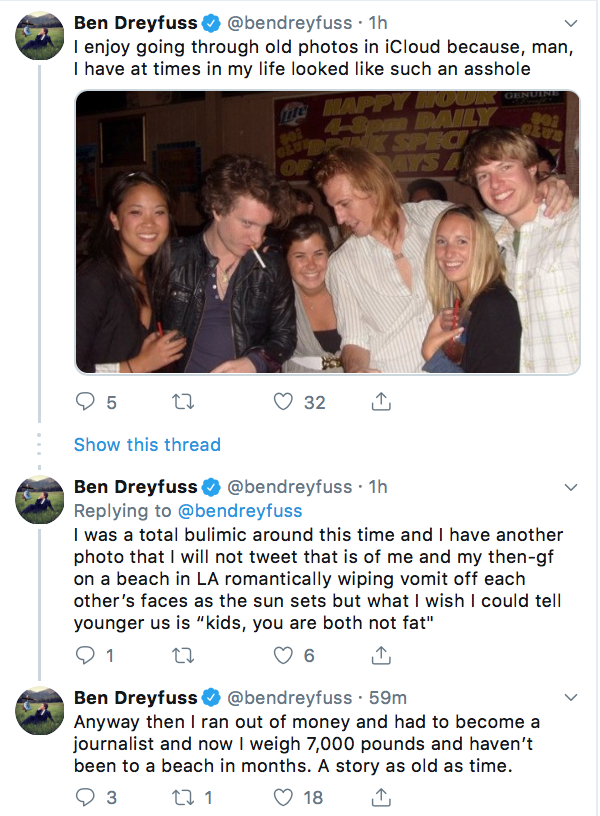 Scaramucci shot back, “I don’t know ⁦@mercedesschlapp. Well. Met her 1x on set of ⁦@seanhannity. She seemed very nice. Call me when the spell breaks.” (RELATED: Trump And Mooch Have Falling Out)

The Reagan Battalion: “As many of you know well, we are not the biggest @ChrisCuomo fans, but good for him for standing up to a thug harassing him while his little girl is standing next to her daddy. Have we all lost our collective minds?”

Nicholas Fondacaro, news analyst, Media Research Center: “Really? You’re fine with him threatening to throw a dude down a flight of stairs for saying a mean word? Yes, the guy was acting like an ass but Cuomo lost his mind.”

Asawin Suebsaeng, The Daily Beast: “Fredo is a horrific, anti-Thai slur, and I’m appalled at all you guys’ casual acceptance of this violence.”

Eugene Gu, MD: “Siberia, which is supposed to be a frozen wilderness, is on fire making a smoke cloud larger than the European Union due to climate change and Hong Kong International Airport is the scene of one of the biggest demonstrations ever, but yeah, let’s talk about Chris Cuomo and Fredo.”

Donald Trump Jr.: “Hey @ChrisCuomo, take it from me, ‘Fredo’ isn’t the N word for Italians, it just means you’re the dumb brother.”