Can the case of my husband, Steve Stockman, be an alarm for Americans who love the Constitution?

The former two-time congressman endured a four-year investigation with four grand juries, followed by an indictment and conviction by our own Department of Justice (DOJ) and Internal Revenue Service. He is now serving a 10-year prison sentence.

But Stockman has filed a compelling appeal showing his innocence with the Fifth Circuit Court of Appeals. All along, I have held the position that, if this ordeal could happen to Steve, it could happen to anyone who might speak out against the agenda of political correctness.

But a Washington Times article by Rebecca Hagelin about the Stockman case on August 8 has caused some to take a fresh look at Stockman’s case, especially in light of the renewed gun control push following the tragic shootings in El Paso and Dayton.

One reader asked after reading Hagelin’s article, “Why isn’t this known in the conservative community?”

There are several plausible answers to that question, but they are really more excuses than reasons. These include the fact that my husband was told along the way that he should not talk about the case. (RELATED: Rep. Stockman: ‘The best way to honor Baroness Thatcher is to crush liberalism’)

Also, at every turn in the case, the DOJ published a press release filled with bias and pejorative adjectives tainting public perception of Stockman and the case against him. On the other hand, Stockman allies couldn’t get a timely press release out through the editors of a press service — they insisted on editing out any opposite slant. The government can spin, but defendants can’t.

Many conservatives took a “wait-and-see” stance on the case — even friends who have known Stockman for years. They tended to believe there had to be some guilt there, regardless of the abundant evidence of corruption in our justice system. Americans really want to believe that our justice system is fair and legitimate.

But, truthfully, most conservative authors and media personalities made no effort to reach out to my husband, his counsel, myself or anyone else who could give them an angle different from that served up by the Obama DOJ. Sadly, the DOJ players stayed the same even after the change in White House residents.

So there was no investigation or exposure by, or outcry from, “conservatives” about what was actually happening to Stockman. The lack of substantive coverage is disturbing, to say the least. Especially since the prosecutor who signed Stockman’s indictment was copied on Lois Lerner’s emails, the IRS employee who targeted conservative nonprofits. 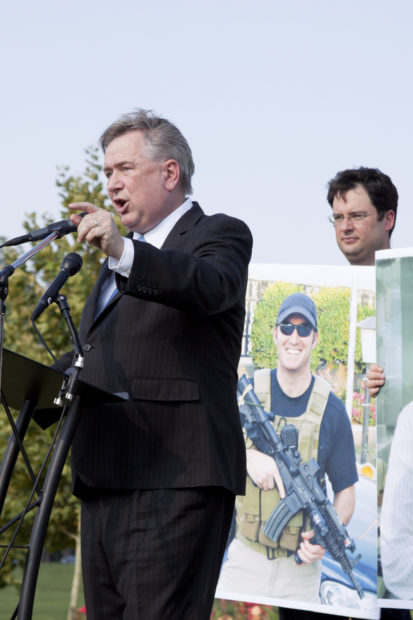 And when considered in light of other happenings in our country, the situation becomes downright alarming.

Since the grievous tragedies of El Paso and Dayton, the political left predictably and immediately renewed their drumbeat for national gun control legislation. It is a fact that not one of the proposed gun ownership restrictions would have prevented either of the two massacres of last week.

Which brings us to the basic fact that so many on both sides of the aisle in Congress just want to pass further limits on gun ownership either because: (1) their ultimate goal is to disarm Americans, or (2) passing more laws feels like the right thing to do. Democratic presidential candidates are saying, Congress must do something.

Why? Congress does not have to pass a new law to address everything that happens in our country. Let the legal process play out.

As conservative author and talk show host Mark Levin has asked, where were the educational instructors, employers, family members, social workers and local law enforcement when these two apparent killers evinced strong indicators they were inclined toward violence? The proactive opportunity to stop these tragedies actually lay in the hands of those in positions of authority in El Paso and Dayton.

America’s Founding Fathers didn’t pass the Second Amendment — “the right of the people to keep and bear Arms, shall not be infringed” — merely for hunters and gun enthusiasts. No. They passed it to prevent a disarmed citizenry in the event that Americans ever found themselves victims of a rogue dictatorial government.

Just a few examples from the 20th century show the effects of disarming a nation’s citizens. In 1929, the Soviet Union established gun control. From 1929 to 1953, about 20 million dissidents, unable to defend themselves, were rounded up and exterminated. (RELATED: Steve Stockman Challenges Labor Unions On Immigration Reform)

China established gun control in 1935. From 1948 to 1952, 20 million political dissidents, unable to defend themselves, were rounded up and exterminated.

Pol Pot created in Cambodia one of the 20th century’s most brutal and radical regimes, which was responsible for killing one million of his own educated, yet unarmed citizens.

It is not difficult to conceive of a situation in which the politicians in elected positions who are currently spewing hatred and encouraging their supporters to disrupt their political enemies at restaurants or at home, one day going even further. Perhaps they would like to see more political prosecutions like the one against my husband, which has led to his imprisonment.

If the ordeal that my vocal and fairly prominent husband has suffered, with multiple violations of his constitutional rights, results in only the sound of crickets from conservative circles, how much greater silence can we can expect when weaponized law enforcement agencies come for the average American and their politically incorrect neighbors?

In his aish.com article, “Silence of the World,”  Rabbi Benjamin Blech reminds us that the world “chose to remain silent as Germany kept testing the limits of the universal tolerance for its evil actions.” He points out that “the Holocaust didn’t begin with crematoria. Hitler moved slowly, cautiously escalating his anti-Jewish policies.”

In light of the malfeasance of deep state bureaucrats, the loud demand for further disarming our citizens, and the escalating hatred for religious people of all stripes, the deafening silence of constitutional conservatives in the case of an outspoken former U.S. congressman may be a most alarming indicator of what could be in store for countless Americans.

Patti Stockman has been married to Steve for 30 years, is a conservative activist in her own right, and partnered alongside him in all his political endeavors. She has her own professional career, having worked for NASA 35 years. Visit www.DefendAPatriot.com to read more, lend your name to the petition for a pardon, read both briefs, or donate, if you wish.