The majority of House Democrats are co-sponsoring H.R. 1296, which “makes it a crime to knowingly import, sell, manufacture, transfer, or possess a semiautomatic assault weapon (SAW) or large capacity ammunition feeding device (LCAFD).”

Rhode Island Democratic Rep. David Cicilline, who authored the House bill, said an assault weapons ban is “an important way to reduce gun violence and to protect people from the carnage of mass shootings,” according to Newsweek.

A House Judiciary Committee hearing to discuss assault weapons is set for Sept. 25.

House Democrats also plan to advance three other measures that will: limit the sales of magazines that hold more than 10 rounds of ammunition, make it easier for judges to take guns away from people who may pose a threat to civilians and bar convicted criminals from purchases firearms, NYT reported.

Democrats are pursuing the gun control measures most likely to pass rather than the assault weapons ban so as to protect a few moderate House members & more Senators afraid of its electoral impact, even without assurances that anything can pass
https://t.co/dyGKB4D5aM

Republican Kentucky Rep. Thomas Massie, chairman of the House Second Amendment Caucus, told The Washington Post he spent his August recess “making fun of people who say, ‘Nobody wants to take your guns.”

Democratic politicians, including 13 Democratic presidential candidates, have placed a large emphasis on banning assault weapons in the U.S. More than 50 people were killed in mass shootings during August.

Former President Bill Clinton wrote a TIME magazine op-ed in August calling for the comeback of a 1994 assault weapons ban. 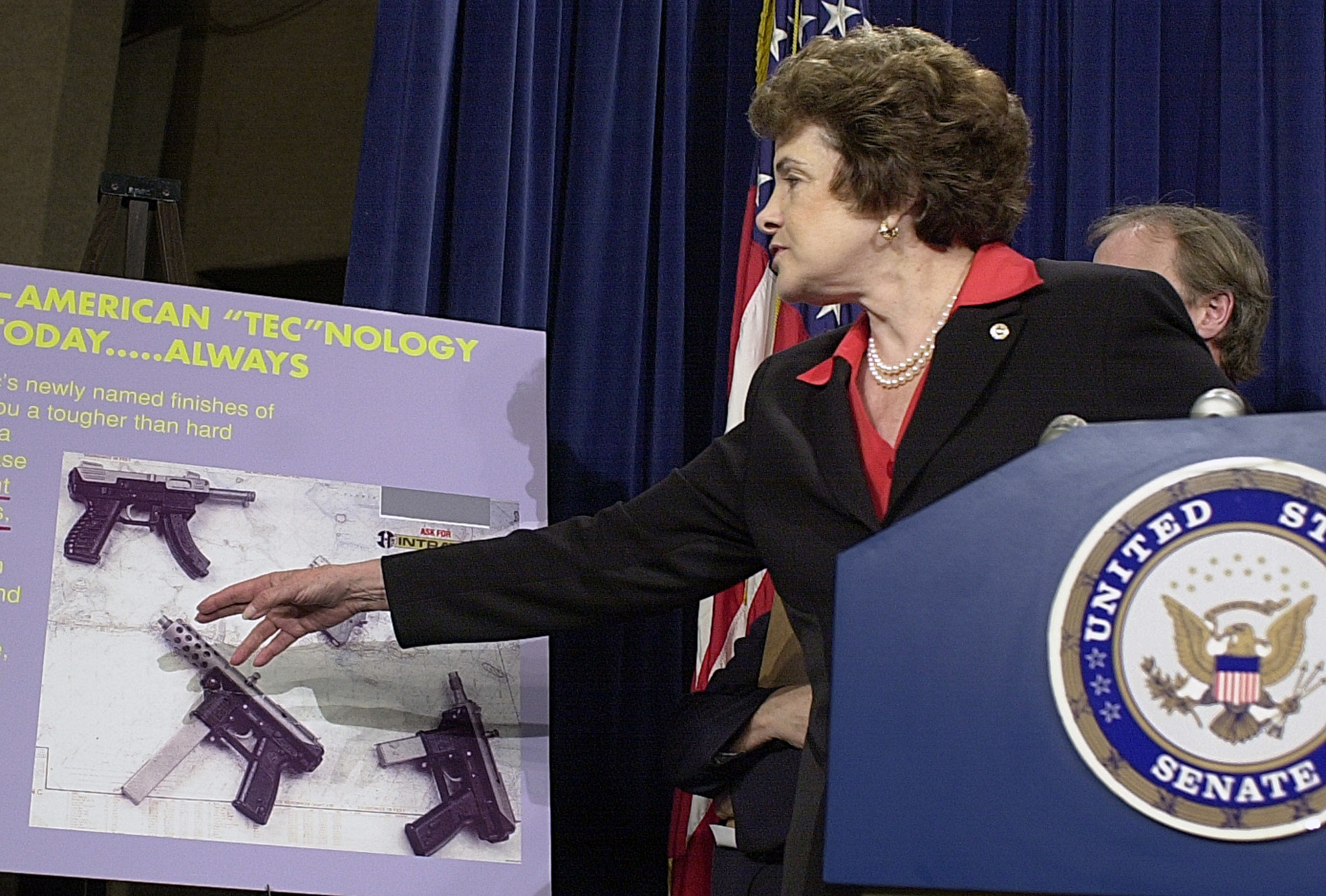 Sen. Dianne Feinstein points out an advertisement for an assault weapon during a news briefing, May 8, 2003 on Capitol Hill. REUTERS/Mike Theiler

“Elected officials speak about the need for change,” Clinton wrote. “But the tragedies do keep happening, while the one thing that we know can reduce the number and the death tolls of mass shootings has not been done: reinstituting the ban on assault weapons and the limit on high-capacity magazines that was in effect from 1994 to 2004.”

A 2004 study the National Institute of Justice supported, which “details the effects of the 10-year ban on assault weapons enacted by Congress in 1994,” concluded researchers could not “clearly credit the ban with any of the nation’s recent drop in gun violence.”

The study found a 17% drop in assault weapon violence; however, the reduction “was offset throughout at least the late 1990s by steady or rising use of other guns” that used limited capacity magazines.

This is a blatant lie that has been debunked repeatedly

The Justice Department commissioned and independent study from the National Institute of Justice (NIJ) which found that the assault weapons ban did not reduce violence.

Someone take this guy’s account away, he’s senile https://t.co/Mj4mKhi4a0

“Generally, I’m not supportive of bans, because I think that we have to focus on sensible gun legislation that we can actually get passed,” Democratic New York Rep. Anthony Brindisi said, according to Newsweek.

“And when you have nine out of 10 Americans saying that they support something like background checks, to me, that’s where we should be focusing the bulk of our energy right now when it comes to gun legislation,” he continued.

Democrats have been critical of the president for his backtracking on stricter gun background checks despite struggling to gain full support for H.R. 1296, which was referred to the House Judiciary Committee on Feb. 15.

Trump said he was “all in favor” of requiring background checks for gun purchases during an Aug. 7 White House press gathering after a shooting in El Paso, Texas, left 22 dead and another in Dayton, Ohio, left nine dead in August. (RELATED: At Least 19 Adults, Eight Minors Have Been Arrested For Mass-Killing Threats Since El Paso)

The president appeared to flip his stance on the issue on Aug. 20.

“People don’t realize we have very strong background checks right now,” he told reporters while leaving New Jersey, adding that he is “very, very concerned with the Second Amendment.”

“We’ve seen this movie before: President Trump, feeling public pressure in the immediate aftermath of a horrible shooting, talks about doing something meaningful to address gun violence, but inevitably, he backtracks in response to pressure from the NRA and the hard right. These retreats from President Trump are not only disappointing but also heartbreaking,” he said, according to Politico.