Yemen’s Houthi rebels took credit for targeting oil facilities in a drone attack that reportedly forced half of Saudi Arabia’s oil supply to shut down Saturday.

Ten drones struck two state-owned Saudi Aramco oil facilities, one of which is the world’s largest oil plant, in Saudi Arabia’s Eastern Province, according to people familiar with the attack, The Wall Street Journal reported.

Fires the strikes caused disrupted the production of 5 million barrels of oil per day, or about 5% of the daily global oil supply, which officials hope to restore by Monday, sources said. Saudi Arabia’s regular production level is 9.8 million barrels a day, CNN Business reported. 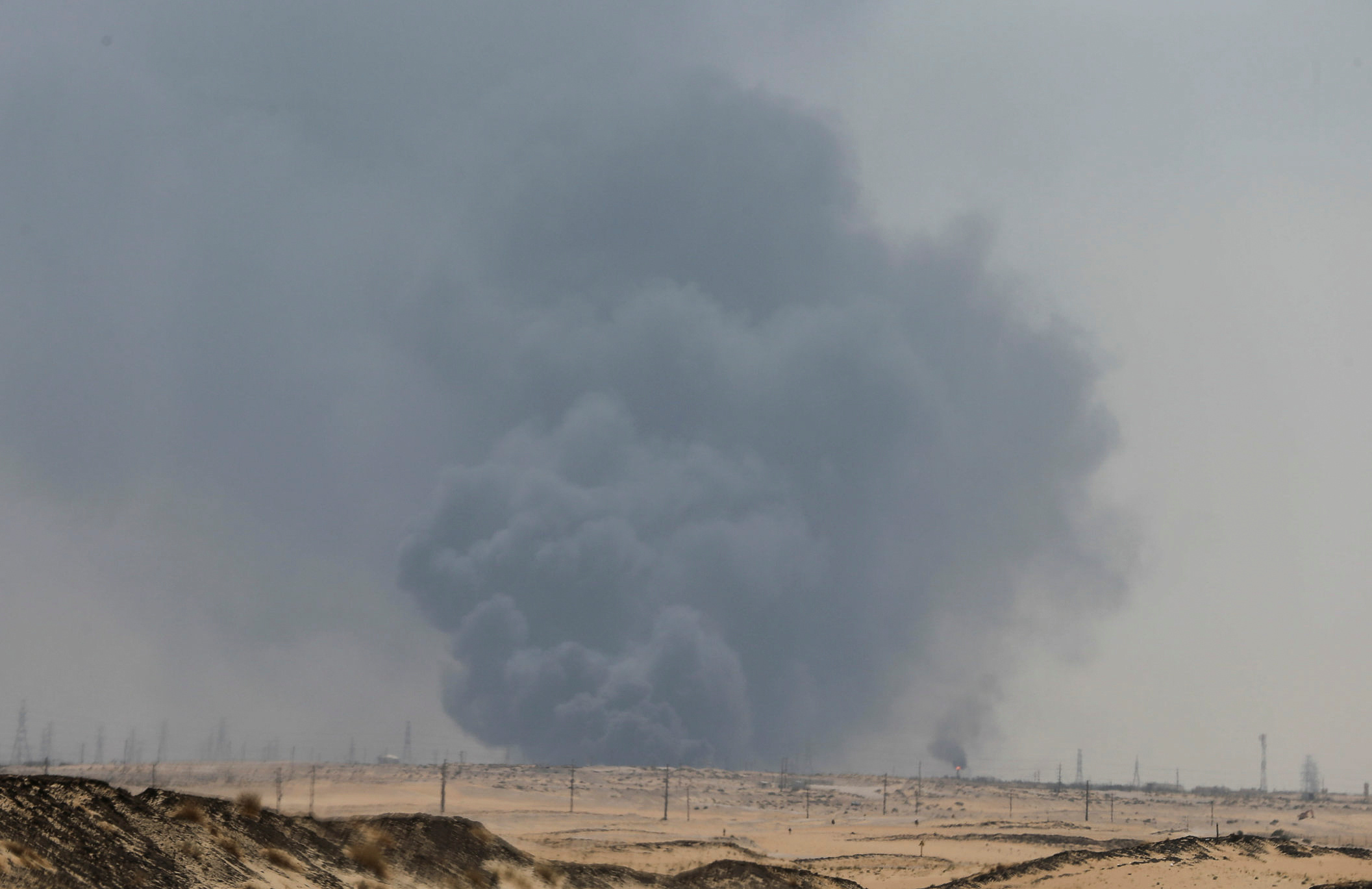 Smoke is seen following a fire at Aramco facility in the eastern city of Abqaiq, Saudi Arabia, Sept. 14, 2019. REUTERS/Stringer

“We promise the Saudi regime that our future operations will expand and be more painful as long as its aggression and siege continue,” a Houthi spokesman said Saturday, according to WSJ.

U.S. President Donald Trump reportedly made a phone call Saturday to Saudi Arabian Crown Prince Mohammed bin Salman and said the U.S. is ready to “cooperate with the kingdom in supporting its security and stability.”

Saudi Arabia “is willing and able to confront and deal with this terrorist aggression,” the prince told Trump, according to the Saudi Press Agency.

The world’s largest oil processing facility has been hit in a drone attack.

Yemen’s Houthi rebels have said they were behind the strikes on Saudi Arabia’s Abqaiq plant. Read the full story here: https://t.co/PIGqR4cB2o pic.twitter.com/0Zor9f3Eye

“The U.S. strongly condemns today’s drone attacks against oil facilities in Abqaiq and Khurais,” U.S. Ambassador to Saudi Arabia John Abizaid said in a statement. “These attacks against critical infrastructure endanger civilians, are unacceptable, and sooner or later will result in innocent lives being lost.”

The disruption could cause oil prices to increase if the country fails to restore production, WSJ reported. U.S. Secretary of State Mike Pompeo blamed Iran for the attack.

“The attack has been quite surprising for the mere amount of damage it caused,” Middlebury Institute of International Studies arms researcher Fabian Hinz told WSJ. “We have seen quite a few drone and missile attacks against Saudi infrastructure, but in most cases the actual damage caused has been quite minimal.”

The International Energy Agency (IEA) tweeted Saturday, “The IEA is monitoring the situation in Saudi Arabia closely. We are in contact with Saudi authorities as well as major producer and consumer nations. For now, markets are well supplied with ample commercial stocks.”

The IEA is monitoring the situation in Saudi Arabia closely. We are in contact with Saudi authorities as well as major producer and consumer nations. For now, markets are well supplied with ample commercial stocks.

Trump said he could meet with Iranian President Hassan Rouhani to alleviate tensions during the 74th United Nations General Assembly, which starts on Sept. 23 in New York.