Democratic 2020 hopeful Beto O’Rourke participated in an “Ask Me Anything” (AMA) on the popular link-sharing site Reddit Thursday, and his answer on gun confiscation was widely criticized.

In an AMA thread, users are encouraged to ask whatever questions they want in the comment section, and the creator of the thread can then choose what to answer. Reddit users can either up-vote or down-vote comment based on how well they contribute to the discussion.

O’Rourke’s AMA thread had over 26,000 comments as of Friday afternoon. Though Reddit’s users found some of O’Rourke’s answers satisfactory, he was strongly down-voted for his other answers.

“How will you confiscate the millions of AR 15s?” one user asked. The candidate has previously said that he plans to enact a mandatory gun confiscation program for AR-15s and AK-47s. (RELATED: Beto O’Rourke: Cops Won’t Go ‘Door To Door’ With Mandatory Gun Buyback Plan, Americans Will Comply)

“Americans will comply with the law. It will be a mandatory buyback of AR-15 and AK-47s, weapons designed for war. Because we understand that theres no reason for a any of us to own a weapon that was designed to kill people on a battlefield. Especially when that kind of weapon is so often used to kill and terrorize people throughout this country — in their schools, in their grocery stores, in their churches, in their synagogues, at concerts… everywhere. I have met countless AR and AK owners who say they don’t need it to hunt, they don’t need it for self defense, it’s fun to shoot but would give it up. Because they also have kids and grandkids and want them to be safe.”

That answer received over 12,000 down-votes, and Reddit users deconstructed all the things wrong with his answer. One user gave a detailed response to O’Rourke’s question, asking him how he would find so many unregistered guns and how he would pay for the “buyback” program.

Another user tore his answer to shreds, telling him “Literally everything about this is incorrect.” 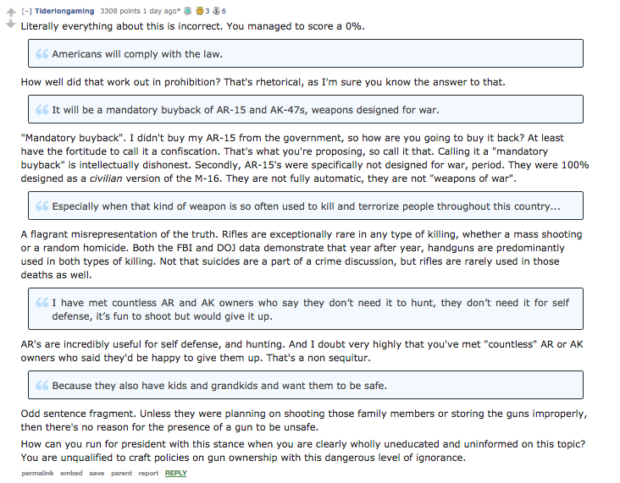 One user commented, “You realize you are not only hurting your campaign but the campaigns of all democrats, right?”

“If you think [Trump] won’t be using this idiocy in the election you are as daft as everyone makes you out to be,” the user added.

Another user told him that his answer was “terrible” and “super out of touch.”

One user mocked his idea that people would simply comply with gun confiscation laws, saying, “Yes, criminals obey the law. Maybe we should make murder illegal too. Oh, it already is? Why aren’t people following the law?” 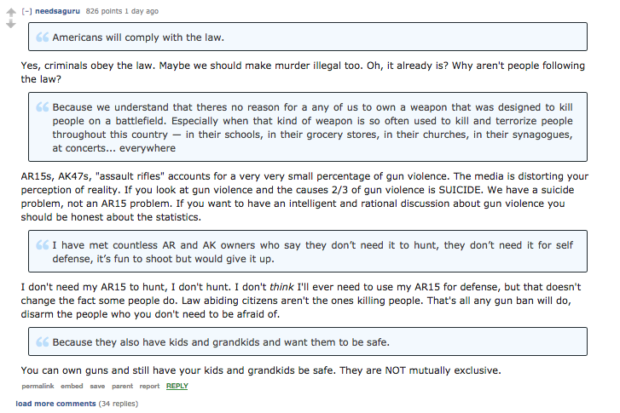 Another user summed it up simply, saying, “Beto legit sounds like a child when talking about this issue.”

While O’Rourke thinks that these plans will appeal to voters, many people are pushing back against his plans.

Even Democratic Sen. Joe Manchin said this week that the Texas politician isn’t going to take his guns away.

“I can tell you one thing: @BetoORourke’s not taking my guns away from me. You tell Beto that OK?” Manchin told a WSJ reporter.