A new report about the relationship between President Donald Trump and Fox News alleges that hosts Chris Wallace and Martha MacCallum criticized and mocked Trump during a closed-door meeting last month.

Fox News hosts Bret Baier, Chris Wallace, and Martha MacCallum attended an event in Manhattan to assure advertisers that “Trump doesn’t own” them, according to a piece published Sunday in the New York Times.

“‘Contrary to the opinion of some people, he’s not our boss,’ Ms. MacCallum said, marveling at Mr. Trump’s criticism of Fox News for airing interviews with Democratic presidential candidates. ‘It is kind of shocking to hear that he really — that’s the way he thinks about how we should cover the election.’

Mr. Wallace joked about the president’s tendency to compare him unfavorably to his father, the ’60 Minutes’ legend Mike Wallace, who died in 2012. ‘He often likes to say about me, ‘You know, I was covered by Mike Wallace, I liked him much more,’” Mr. Wallace told the advertisers. ‘To which my reaction is always: One of us has a daddy problem, and it’s not me.'”

This report comes as another rift has apparently taken place between Trump and the network.

The president reportedly has a good relationship with the weeknight opinion hosts such as Sean Hannity and Laura Ingraham, but he has repeatedly taken issue with some of the daytime news hosts for what he sees as unfair coverage or criticism. 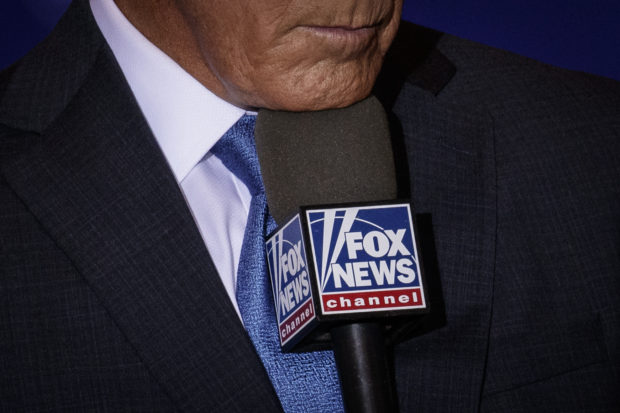 A Fox News correspondent works before President Donald Trump’s arrival at a press conference on the sidelines of the United Nations General on September 25, 2019 in New York City. Photo by Drew Angerer/Getty Images

Earlier in October, clashes between Trump and Fox ensued after the network released a poll that showed 51 percent of Americans want Trump impeached and removed from office. (RELATED: Fox News ‘Terminates’ Trey Gowdy)

Trump responded by saying that Fox News pollsters “suck” and that Fox is “much different than it used to be in the good old days.”

The Trump 2020 campaign also said that the poll belonged in the “garbage” due to its alleged oversampling of Democrats.