The legendary musical careers of Taylor Swift and Kanye West will forever be intertwined, but the divergent paths the two superstars have taken recently might end up being a defining part of their legacies.

The two superstars will forever be linked thanks to Kanye’s famous interruption of Swift at the 2009 MTV Video Music Awards (VMA). At the time of the VMAs, Taylor Swift was still a darling of cultural conservatives, and someone they thought was, in the decadent cesspool of Hollywood, a bright light of wholesome sanity.

Kanye, on the other hand, was the boorish rapper who confronted her. 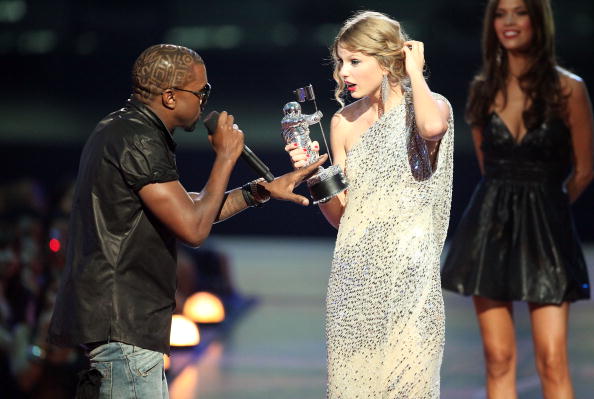 West angered conservatives in 2005 when he claimed that then-President George W. Bush “doesn’t care about black people,” criticizing Bush’s handling of the aftermath of Hurricane Katrina. Meanwhile, Swift had managed to stay out of the political fray until recently, and had spent years building up a significant following in the heartland, where most residents are conservatives.

Bush called the moment the low point of his presidency. Conservative Fox News’ host Bill O’Reilly strongly condemned West’s comments and said that Katrina’s aftermath “is not about race. It’s about class.”

“Does Kanye West actually believe that Bush eagerly anticipated televised images of parched, screaming black babies as a public-diplomacy tool to boost European and Middle Eastern support for U.S. policy in Iraq and the Arab world?” Deroy Murdock of National Review asked at the time.

Fast forward to 2016, and West began to alienate his former fans by saying nice things about President Trump. West donned a Make America Great Again hat at the White House last year, hugged the president in the Oval Office, and even wrote a song praising the president.

“I know Obama was heaven sent, But ever since Trump won, it proved that I could be President,” West wrote in “Ye vs. The People.”

He then bemoaned a political culture that pressures people of color into supporting Democrats at the ballot box.

“All Blacks gotta be Democrats, man, we ain’t made it off the plantation,” West sings.

More recently, he claims to have had a serious religious conversion, promising to not make anymore secular music and embarking on pop-up “Sunday Service” shows, most recently in Washington, DC at Howard University.

West’s faith journey appears to be a family affair. Kim Kardashian and their daughter were baptized in Armenia last week, and by all accounts Kardashian has been fully supportive of West’s evolving political views, even as other Hollywood elites have jettisoned the rapper. West’s evolving attitudes towards family life are also something that can appeal to social conservatives. West reportedly told his wife that “it affects me when pictures are too sexy,” in an argument about her risque Met Gala dress.

Conservatives have more reasons to embrace West than his friendly relationship with the man in the White House.

Now, West is making moves that could win him the hearts of conservative Christians throughout the country. West announced recently that he will be using his massive platform and considerable talents to promote his Christian faith. The rapper announced over the weekend that he is done making secular music, and will only make gospel music for the rest of his career. West’s latest album “Jesus is King: A Kanye West Experience” is expected to be released sometime this month. (RELATED: How Elvis And Kanye West’s White House Visits Influenced Pop Culture And The Nation)

It has been quite the turn of events for West, who is using his megaphone to defy stereotypes and start a much-needed dialogue.

As much West used to draw the ire of conservatives for his inflammatory comments about Bush, Swift received the exact opposite reception. Trump himself took to Twitter to praise Swift, calling the artist “fantastic” and “terrific,” before recently changing his tune. Republican lawmakers even used Swift’s concerts to fund-raise as recently as 2015.

While still surprising, Swift’s transformation appears to have been years in the making. Swift has frequently faced criticism from liberal media types for not using her celebrity to promote left-wing political views. The left-leaning Guardian released a bizarre editorial during the first year of Trump’s presidency, calling Swift’s silence on the administration “striking.”

“Her silence seems to be more wilful: a product of her inward gaze, perhaps, or her pettiness and refusal to concede to critics,” the editorial wrote. “Swift seems not simply a product of the age of Trump, but a musical envoy for the president’s values.”

Singer Taylor Swift attends the “Charles James: Beyond Fashion” Costume Institute Gala at the Metropolitan Museum of Art on May 5, 2014 in New York City. (Photo by Andrew H. Walker/Getty Images)

Since her endorsement in the Tennessee senate race, Swift has only become more aggressive in promoting a political agenda. In her latest album “Lover,” Swift attempted to rebrand herself as a sort of LGBTQ icon. One of her recent music videos promoted gay marriage, and she has continued to push the envelope with her activism. Swift used her acceptance speech at the 2019 VMA’s to promote the “Equality Act,” a bill stalled in the senate that has been promoted by LGTBQ activists, which would require schools to allow transgender athletes to compete in the sport consistent with their gender identity, among other items. (RELATED: Here Are The Two Republicans Who Co-Sponsored A Bill To Allow Male Athletes To Compete In Women’s Sports)

Swift has also expressed her avid support for abortion rights and attempted to repent for her silence during the 2016 presidential election, recently saying that she feels “really remorseful” for not endorsing Democratic presidential nominee Hillary Clinton.

“We’re a democracy — at least, we’re supposed to be — where you’re allowed to disagree, dissent, debate,” she said earlier this year. “I really think that [Trump] thinks this is an autocracy.”

Whether or not Swift and West’s recent activism is genuine or opportunistic will be debated by critics and fans alike.

Like most things in American politics and culture today, nobody could have predicted this ten years ago when West famously interrupted Swift at the VMAs, and their political and social transformation will likely fascinate people for a long time to come.

1
Lindsey Graham Unloads On Pelosi: She 'May Pray Privately, But She's Orchestrated The Trial Of Holy Hell'
Politics
2
'The Senate Is On Trial': Nadler Says The Impeachment Is No Longer Just About The President
Politics
3
Trump Asked, ‘How Much Of This Sh** Do We Have To Listen To?’ Before Drone Wiped Out Soleimani
World
4
Foster Friess Could Shake Up The Wyoming Senate Race
Politics
5
Antifa Group To March Alongside Pro-Gun Protesters In Virginia
US