Presidential candidate Tulsi Gabbard won the fourth round of Democratic debates Tuesday night, according to a poll by Drudge Report.

The poll crowned Gabbard the winner of the debate with about twice as many votes as the second-place candidate, businessman Andrew Yang, at the time the debate ended. Gabbard got 40.16% of the votes and Yang received 20.49% when the debate ended. (RELATED: Tulsi Gabbard Wins Debate Before It Even Starts In Gorgeous White Pantsuit)

She started off the debate by separating herself from the field of 12 candidates during opening statements, which were framed around the impeachment inquiry into President Donald Trump. While many of the candidates expressed strong approval for impeachment, Gabbard took a different approach and said impeachment “will only further divide a terribly divided country.”

“If impeachment is driven by these hyper-partisan interests, it will only further divide a terribly divided country,” Gabbard said. “Unfortunately, this is what we have already seen play out as calls for impeachment really began shortly after Trump won his election. As unhappy as that may make us as Democrats, he won that election in 2016.”

The congresswoman hit back at CNN and The New York Times — the two outlets moderating the event in Ohio — for “smearing” her, saying they suggested she is a Russian asset and an Assad apologist.

“Not only that, but New York Times and CNN have also smeared veterans like myself for calling for an end to this regime change war,” she said. “Just two days ago, The New York Times put out an article saying that I’m a Russian asset and an Assad apologist and all these different smears. This morning, a CNN commentator said on national television that I’m an asset of Russia. Completely despicable.” 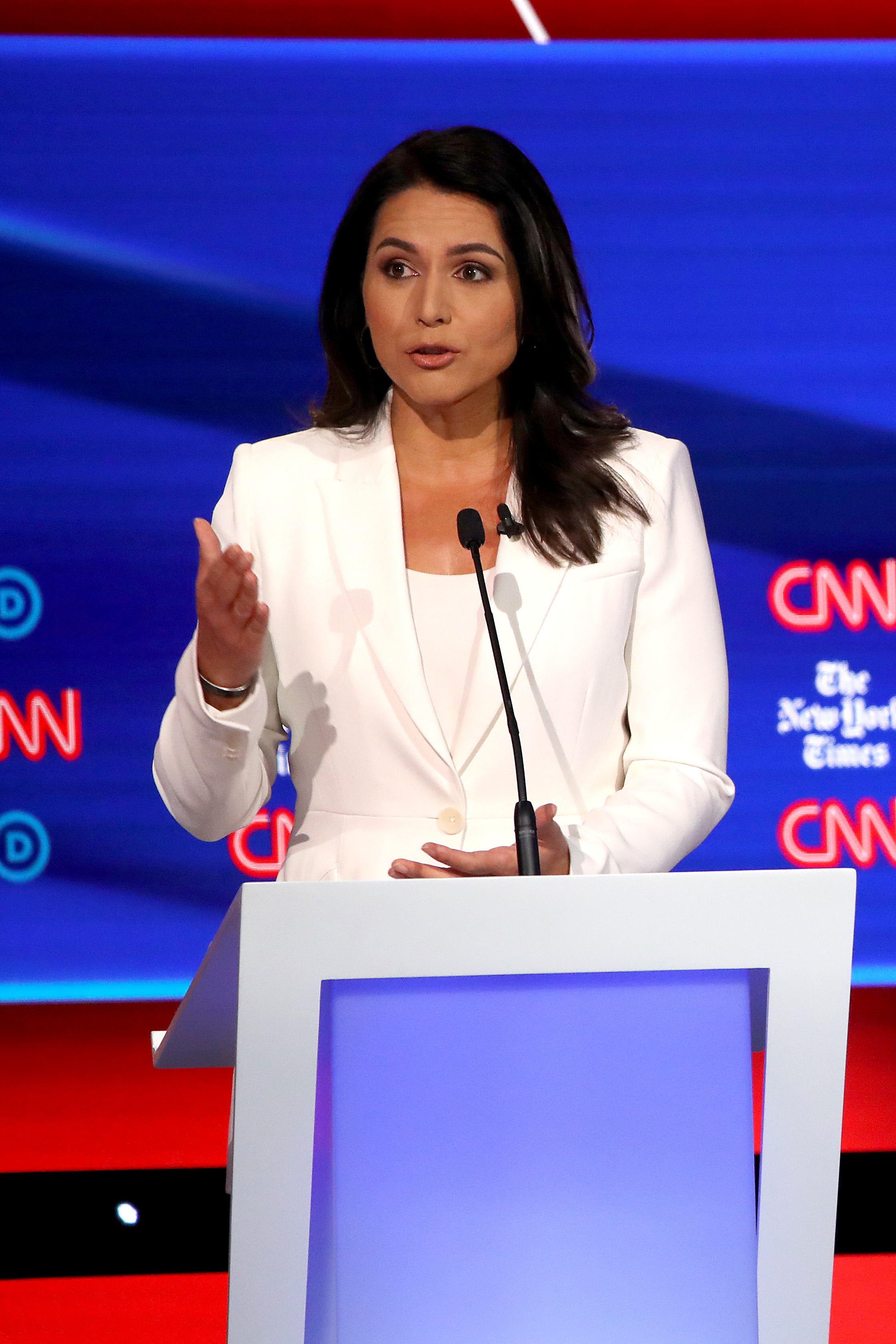 Gabbard called out her competitors multiple times throughout Tuesday’s debate as well, asking Massachusetts Sen. Elizabeth Warren if she would join her “in calling for an end to this regime change war in Syria, finally.”

Although she hit back at the other candidates, the 38-year-old also admitted “it’s not fair” to ask some of the older candidates about their health and fitness in regards to their ability to serve as their country. The moderators asked Vermont Sen. Bernie Sanders, former Vice President Joe Biden and Massachusetts Sen. Elizabeth Warren about their ability to serve in office given their ages. Sanders in particular has had health scares, suffering from a heart attack Oct. 1.

“I am grateful to have been trained very well by the army and do my best to stay in shape, but here’s the real question I believe you should be asking is — who is fit to serve as our commander-in-chief?” Gabbard asked, hitting back at the moderators again. “This is the most important responsibility that the president has.”

Toward the end of Tuesday’s debate, Gabbard called for Americans to stand united regardless of any differences.

“When I look out at our country, I don’t see deplorables, I see fellow Americans,” she said.