Fact-checking website Snopes butchered its fact check of a viral but false tweet linking Chick-fil-A to anti-gay legislation in Uganda.

A Ugandan official announced plans on Oct. 10 to reintroduce a bill providing the death penalty for homosexuality, though a spokesperson for the Ugandan president has since said that there “are no plans by the government to introduce a law like that.” 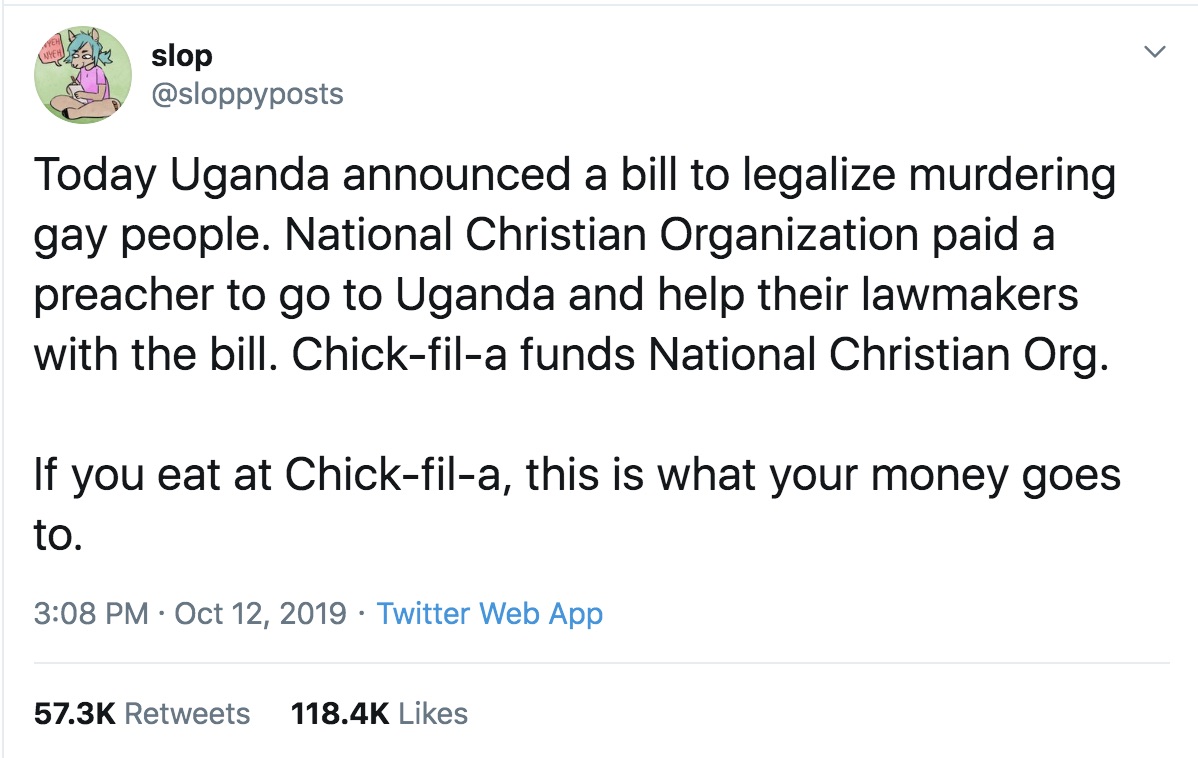 In ensuing tweets, the Twitter user posted links to two outdated articles, neither of which proved the tweet’s claims.

The first link, a Business Insider article from 2012, noted that the WinShape Foundation, a nonprofit funded by Chick-fil-A and its owners, donated to the National Christian Foundation (NCF) in 2010. The NCF is one of the country’s largest Christian nonprofits and provides funding to thousands of Christian charities and churches, including some that operate in Uganda.

The Daily Caller News Foundation reviewed the WinShape Foundation’s tax returns between 2010 and 2017 (the most recent year available) and found that WinShape stopped donating to the NCF after 2011. There is no indication that Chick-fil-A is currently funding the NCF, much less bankrolling changes in Ugandan legislation through the NCF.

The second article, a 2014 blog post, asserted links between NCF-funded churches and anti-gay movements in Uganda, though even Snopes conceded that there’s no evidence that “NCF-funded groups are involved in any potential renewed efforts” to pass a death penalty law for homosexuality in Uganda.

Snopes rated the false tweet a “mixture” of truth and fact in its fact check, which incorrectly indicated that WinShape currently funds NCF.

“For several years, the WinShape Foundation has provided some funding to the NCF, in particular, as shown in the charity’s annual tax documents,” Snopes writer Dan Macguill asserted Tuesday.

Macguill added later that “it’s absolutely true that the WinShape Foundation, which was founded by the Cathy family, is still run by them, and receives almost all of its funding from Chick-fil-A, has for several years provided funding to several Christian conservative groups and projects, including the NCF.”

The Snopes writer appears to have gotten it wrong. Winshape’s tax documents — which Macguill linked to in the story — show that NCF donated to the WinShape Foundation in 2017, not the other way around.

Neither WinShape nor the Chick-fil-A Foundation, the company’s charitable arm, donated to the NCF in 2017, the most recent year publicly available, according to tax documents the DCNF reviewed. (RELATED: PolitiFact Butchers Ralph Northam Fact Check)

“Chick-fil-A has not supported legislative campaigns of any kind in Uganda,” a Chick-Fil-A spokesman told the Washington Examiner’s Brad Polumbo, who criticized Snopes in a column Wednesday.

Snopes, which did not return a request for comment, has previously struggled with accuracy.

Snopes in January falsely ruled it “unproven” that Native American activist Nathan Phillips, who briefly shot to prominence after falsely accusing conservative high schoolers of racially harassing him, lied about being a Vietnam veteran, despite video evidence showing that he did.