The first meeting of the Russia-Africa summit occurred Wednesday morning. The summit is taking place Oct. 23-24 in Sochi, Russia.

“This summit marks not only the beginning of Russia’s return to Africa, but also the confirmation of Russia’s status as a global player,” Russian Armed Forces General Staff Valery Gerasimov said in an interview with Xinhua News Agency.

On the first day, heads of 43 out of the 54 countries and governments in Africa arrived. The remaining 11 were represented by ministers or ambassadors. Egyptian President Abdel Fattah el-Sisi became the co-chair of the Sochi meeting not only as the leader of one of the most powerful political-military countries in Africa, but also as the head of the African Union.

At the summit, they plan to discuss military agreements, nuclear power plants, diamonds, oil, and how all of this could affect Western powers and China. 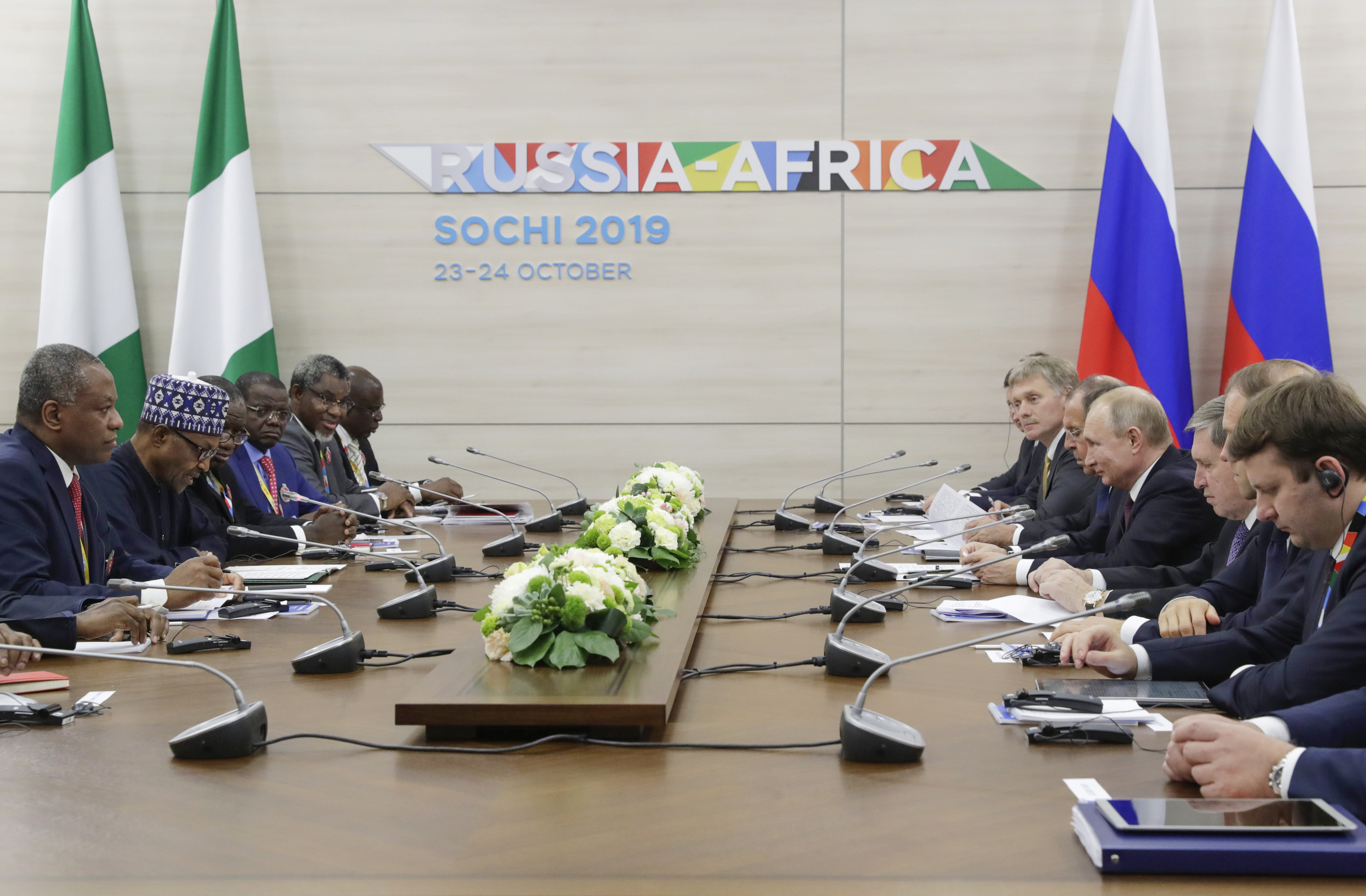 Russian President Vladimir Putin (4R) meets with Nigeria’s President Muhammadu Buhari (2L) on the sidelines of the 2019 Russia-Africa Summit in Sochi on October 23, 2019. (Photo by MIKHAIL METZEL/SPUTNIK/AFP via Getty Images)

The Kremlin already had a strong interest in Africa before the summit was made official. Russian military, officials and political strategists are already working in almost 30 African countries. The interest reportedly came not only from the continent’s resources, but also as an ideological strategy against the West. (RELATED: A Mysterious Explosion Is Spreading Nuclear Fallout In Russia. Authorities Have Arrested Three U.S. Diplomats)

However, Russia’s new ambassador to South Africa, Ilya Rogachev, recently dismissed the characterization of the summit as a Russian attempt to compete with Western powers for influence and natural resources in Africa, saying that’s a “colonial perspective.”

He argued Russia was “returning to Africa on an equal footing.” Moscow now allegedly wishes to put the relationship back on track after it had been put on hold during the 1990s because of Russia’s own internal problems during that decade.

For years, Russia has been stirring the Western-relations pot by reminding local African societies of old territorial and interethnic conflicts and stirring up anti-Western, “anti-colonial” sentiments, according to The Times. These political strategists are helping local leaders who have expressed their willingness to support Russian interests win elections. Then the winners are allegedly supplied with money and weapons, concluding deals with them, public and private, of various kinds — from mining and agriculture restoration, to the construction of various points of “military-technical support and training.” 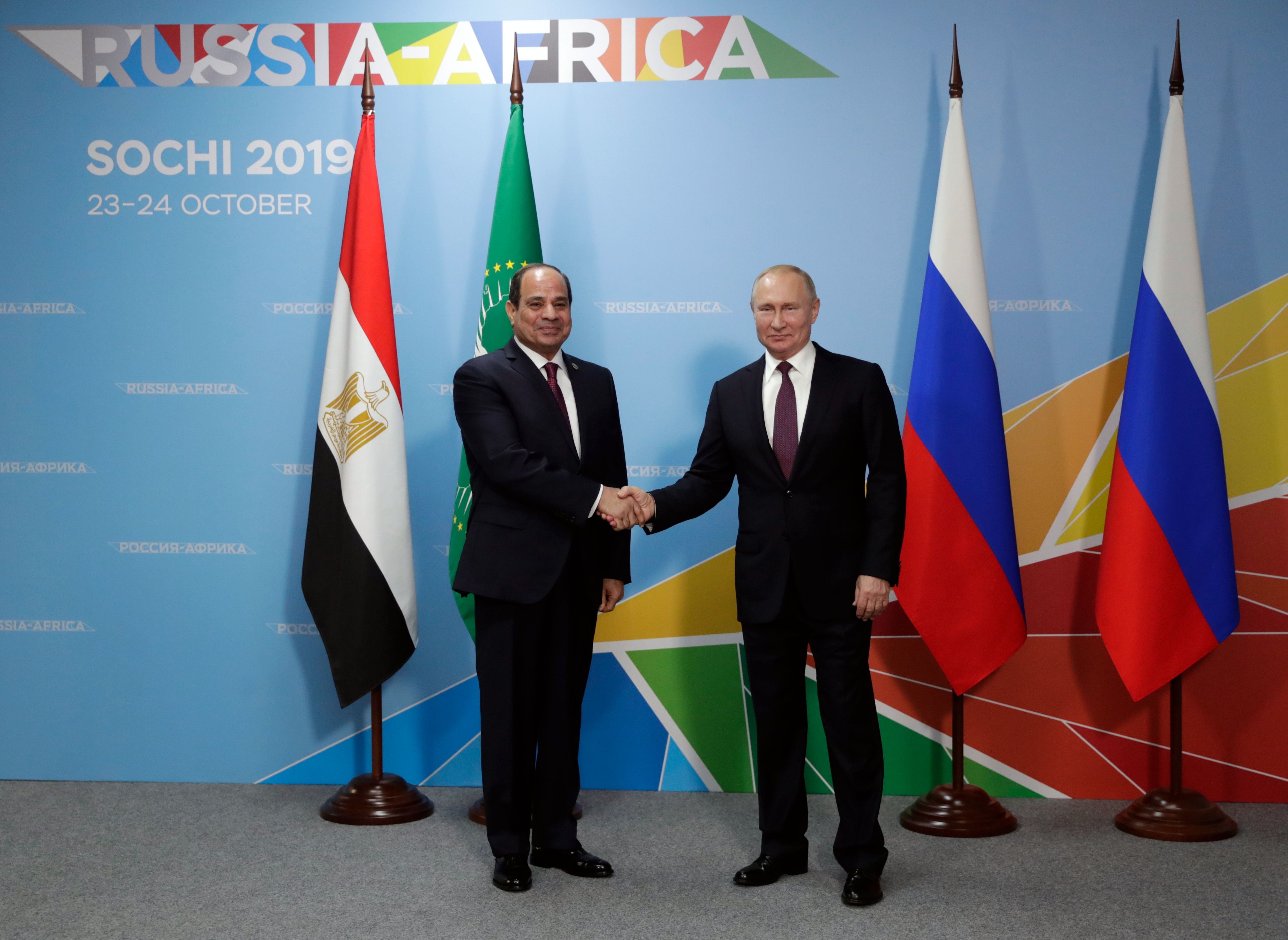 Russian President Vladimir Putin (R) meets with his Egyptian counterpart Abdel Fattah el-Sisi on the sidelines of the 2019 Russia-Africa Summit in Sochi on October 23, 2019. (Photo by MIKHAIL METZEL/SPUTNIK/AFP via Getty Images)

According to the Kremlin, the military component of Russia’s ties with African countries so far looks the most promising, especially now that the U.S. has had waning interest in the continent under the Trump administration. Since 2018, Moscow reportedly supplied arms to African countries totaling more than $2.036 billion and currently have military cooperation agreements with more than 20 African countries. (RELATED: China Pledges Another $60 Billion To Africa, Forgives Debts)

In an interview conducted by Radio Liberty, Irina Filatova, a professor at Natal University in Cape Town, South Africa, discusses why she thinks the African Union is more likely to cooperate for common interests with Russia.

“There were no Russian colonies and protectorates, they did not oppress us,” she reportedly said.

She claims that even though the USSR did not necessarily help during this time period, people still remember them fondly.

How will Russia making deals with the African Union affect China’s presence? Filatova notes that China was welcomed for these same reasons, but “these joyful expectations have subsided, and many African countries are unhappy with the Chinese presence on their land. I think it is possible that the same thing can happen to Russia in Africa.”

Editor’s Note: Quotes from Russian figures were translated by the author.