Speaking to a roundtable of Bloomberg News editors and reporters Friday, the California Democratic congresswoman expressed the need to “win the Electoral College” in order to win the election, meaning candidates should avoid issues — like Medicare for All and the Green New Deal — that could alienate moderate Democratic voters in must-win states like Michigan and Pennsylvania.

“Remember November,” she added. “You must win the Electoral College.”

While Bloomberg reported Pelosi’s caution not to back any particular candidate, the outlet also reported the House Speaker’s concern that Democrats like Massachusetts Sen. Elizabeth Warren and Vermont Sen. Bernie Sanders are appealing to the party’s left-wing base, not the mainline voters Democrats must have to win the election.

“Bernie and Elizabeth own the left, right?” she said, commenting on the desire of most candidates to go as far left as possible. “Is anybody going to out-left them?” 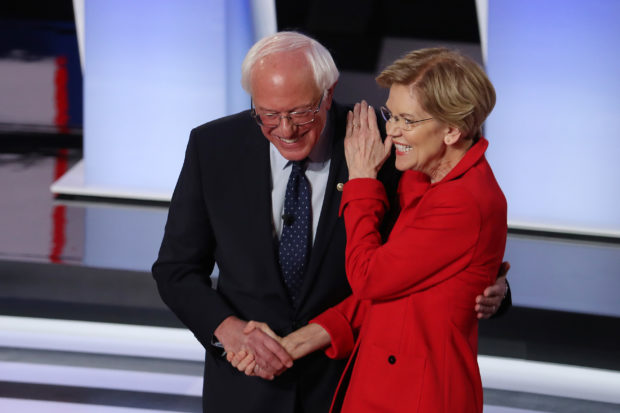 “As a left-wing San Francisco liberal I can say to these people: What are you thinking?” she told reporters at the event. “You can ask the left — they’re unhappy with me for not being a socialist.”

Pelosi was likely referring to her high profile brushes with the four liberal congresswomen known as “The Squad.”

To Pelosi, protecting former President Barack Obama’s Affordable Care Act is “the path to health care for All Americans,” not Medicare for All, which “has its complications.”

“The Affordable Care Act is a better benefit than Medicare,” she said. (RELATED: ‘We Need To Up Our Game, Folks’: Laurence Tribe Calls Trump World Series Ad ‘Brilliant’)

In addition to expressing a desire to not “keep increasing” the national debt, the California congresswoman also commented on the Green New Deal: “There’s very strong opposition on the labor side to the Green New Deal because it’s like 10 years, no more fossil fuel. Really?”

Speaking about the release of her healthcare plan on Friday, which she claims will cost $20.5 trillion, Warren told reporters that those who lose their jobs in the private health insurance sector will “work in other parts of insurance.”