Climate activists preach a gospel of conservation that aims to redeem humanity’s environmental sins. They counsel us to abstain from eating meat to reduce our “carbon footprint,” and prophesy that Earth will perish unless governments worldwide trust the oracle from whom we received this hallowed revelation.

Climate cultists appropriate aspects of Christianity to call the world to repent for its “Original Sin of a carbon industrial revolution,” wrote Baker. They do that and more. Climate cultists, whether consciously or unconsciously, have adopted the schema of the Christian eschaton, or end of the world. They have also incorporated into their faith elements of neo-paganism.

Baker wasn’t the first to spot traces of the eschaton in the climate gospel. Researchers Rachelle Peterson and Peter Wood remarked in “Sustainability: Higher Education’s New Fundamentalism” that “sustainability, like Christianity, offers a view of the Earth as once-pristine and pure but now fallen; recognizes the sinfulness of humanity,” and “offers forms of expiation and absolution.” However, rather than seeking to redeem humanity in the “next life,” sustainability promises to stave off the end times and save sinners in the “here and now.” (RELATED: Baltimore’s Climate Change Lawsuit Against Energy Companies Can Proceed, Supremes Say) 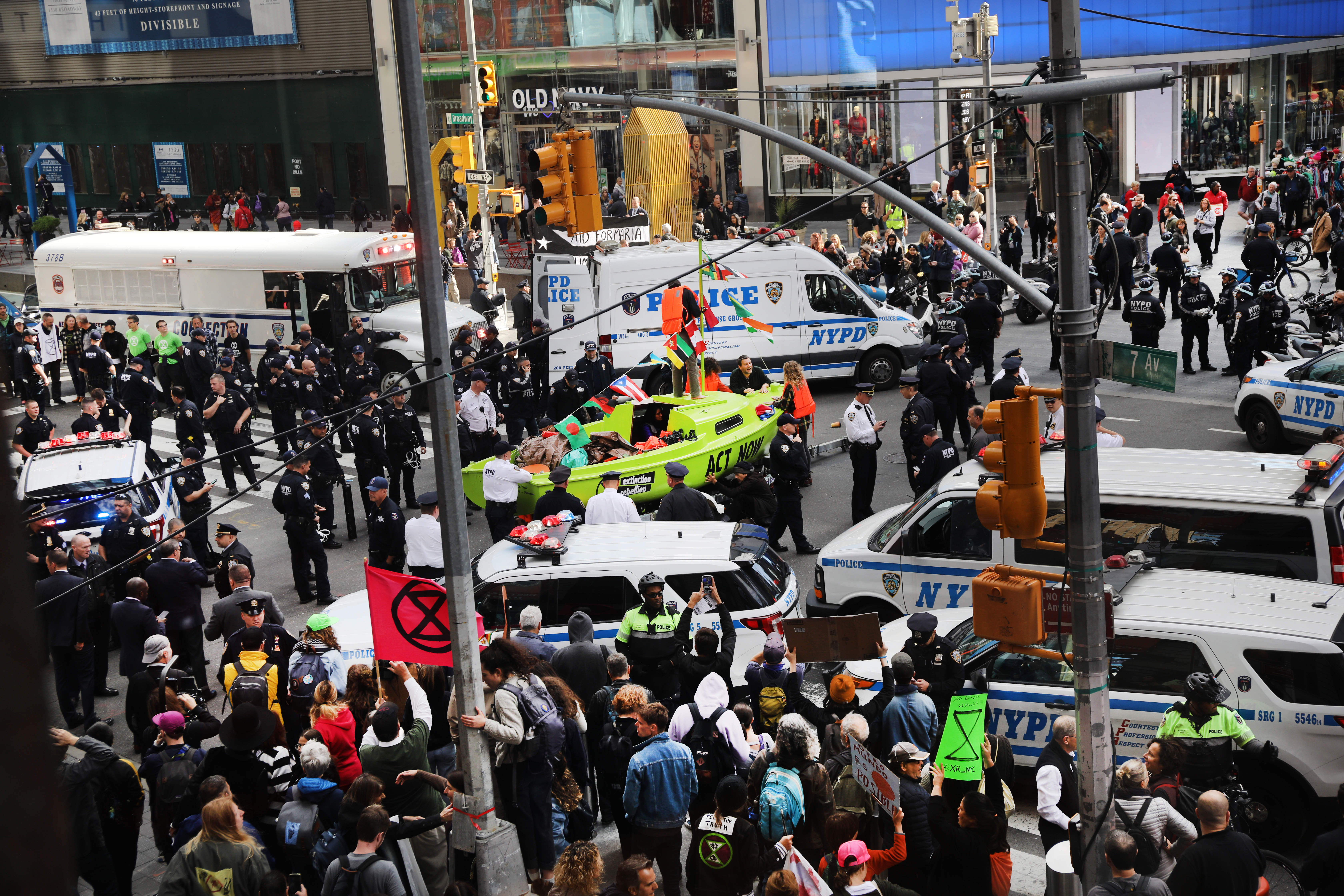 Police gather around a small sailboat that was dropped off in Times Square as part of a protest by the environmental group Extinction Rebellion on October 10, 2019 in New York City. (Photo by Spencer Platt/Getty Images)

Some episodes have emphasized the climate cult’s resemblance to neo-paganism. Sumantra Maitra at The Federalist pointed to an event at Union Theological Seminary in New York City where students confessed their sins to plants. Maitra argued that this means climate activists are “pagan animists.” In other words, they believe that worshipping nature enables one to “grow as a living soul connected to the universe.” Maitra also highlighted a gathering at the Glarus Alps where 250 Swedes hosted a funeral to mourn a melting glacier. And Martha Sheen at The Irish Times identified shades of paganism in the climate gospel’s code of how to live, which prescribes “ritualistic sacrifices” like abstaining from meat to “satisfy the gods.”

Maitra and Sheen noted that, as opposed to Christians, Jews, and Muslims, who worship a personal creator that engages humanity from without space and time, neo-pagans worship Earth and other created things.

The emergence of pagan themes in climate activist circles is part of a trend away from Judeo-Christian-based faiths and toward religions like Wicca, which has surged in popularity among millennials, the demographic that worries most about climate change. Wiccans aren’t the only neo-pagan sect. “Druids, Goddess worshipers, Heathens, and Shamans” count too. And although neo-pagan beliefs vary, historian Ronald Hutton of Bristol University has said that neo-pagans practice “forms of worship which regard nature as sacred.” Some worship inanimate objects such as “trees, plants, and animals” to glorify the “soul” of each. Pre-Christian Celts, for example, worshipped the River Boyne in Ireland as Boann, the “Celtic Goddess of Poetry, Fertility, Inspiration, Knowledge, and Creativity,” to quote one feminist writer. Almost all pagans consult an astrology guru and play with tarot cards. (RELATED: Greta Thunberg Warns Vancouver: ‘Change Is Coming — Whether You Like It Or Not’)

Neo-pagans form a small segment of Americans, but their ideas have permeated elites. Democratic New York Rep. Alexandria Ocasio-Cortez in March indulged fans who obsessed over what her time of birth and horoscope meant for the future of the republic. In response to “fervent public interest,” she allowed astrologer Arthur Lipp-Bonewits to tweet the information. Singer and climate crisis believer Lana Del Ray described herself in 2017 as a “witch” and said she hexed President Donald Trump. She bade her Twitter followers do the same, directing them to “bind” the president on dates that “corresponded to monthly waning crescent moons.”

New England Patriots quarterback Tom Brady trumpeted his connections to neo-paganism after winning his sixth Super Bowl title in February. He told reporters that his wife, supermodel and climate crisis apologist Gisele Bundchen, “always makes a little altar” for him before the big game and provides him with “healing stones and protection stones.” Bundchen allegedly predicted that the Patriots would overcome the Los Angeles Rams in Super Bowl 53 and said to Brady later that night, “You’re lucky you married a witch.”

There have also been reports claiming that conservative icon and former British Prime Minister Margaret Thatcher, who played a formative role in persuading the United States to sign on to the Montreal Protocol in 1987, consulted an astrologer after she was nearly assassinated in 1984 by IRA terrorists. The Irish Times in 1996 quoted astrologist Marjorie Orr alleging she was asked by Thatcher to “warn her of future threats.”

Former President Ronald Reagan, without whom there wouldn’t have been a Montreal Protocol, leveraged his influence to help the treaty along for reasons, said The New York Times in 2013, “no one has ever quite understood.” Reagan was, of course, warned that failing to join the protocol would deplete the earth’s ozone layer. But according to former White House Chief of Staff Don Regan, “virtually every major move” at the Reagan White House was cleared by Joan Quigley, an astrologer hired by Mrs. Reagan after John Hinckley Jr. failed to assassinate the president outside the Washington Hilton in March 1981. At one point, wrote historian H. W. Brands in “Reagan: The Life,” it appeared to some in the administration that Quigley’s consultations determined even the president’s medical regimen. (RELATED: Climate Change Activists Protest By Spraying Fake Blood On UK Treasury With Firetruck Hose) 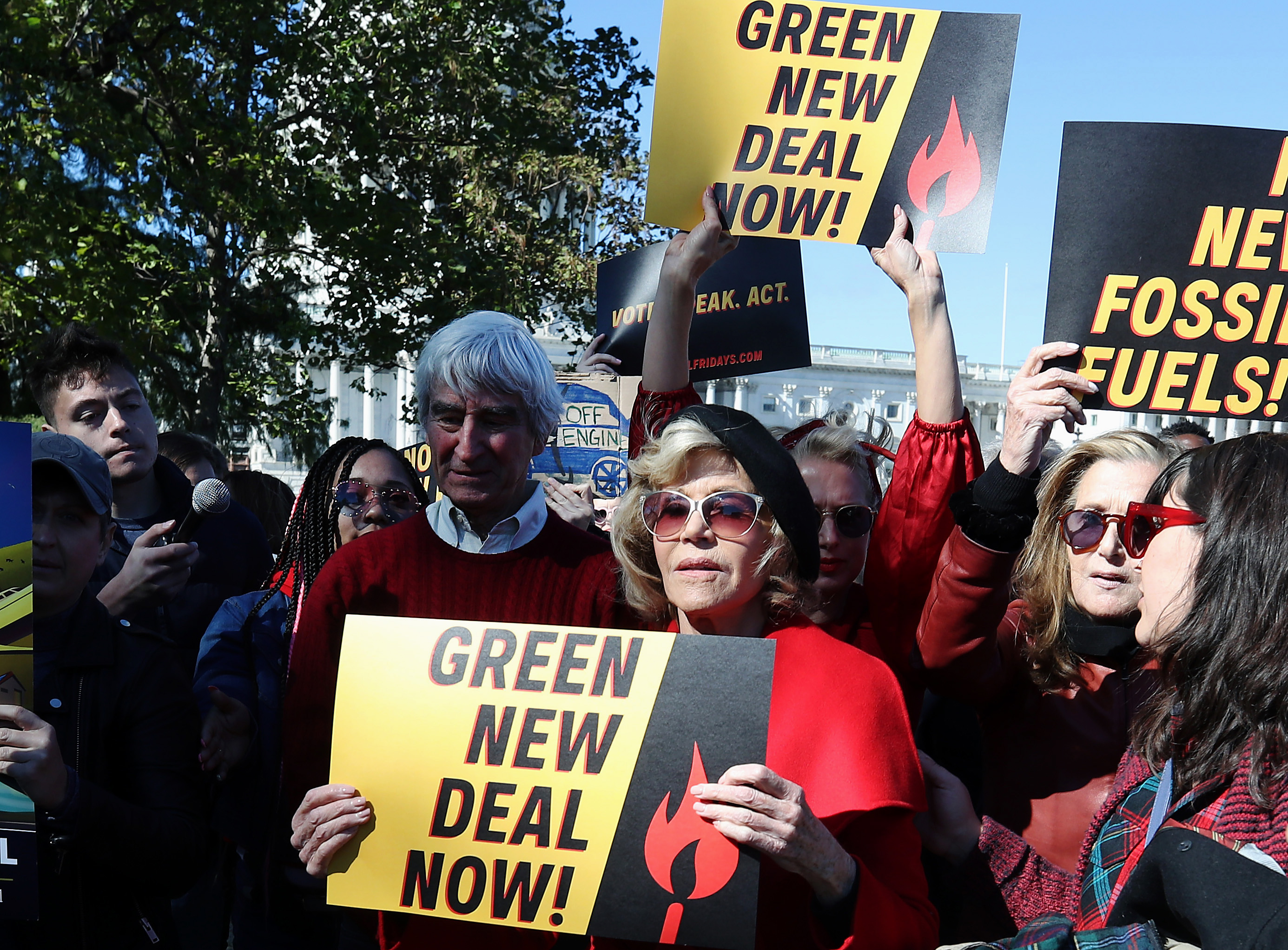 None of this suggests that all climate crisis believers are neo-pagans, but wherever one hears among elites a call to save the planet, one also finds neo-paganism.

The outbreak of essays revealing the climate change movement’s religious underpinnings bothered at least some of its defenders. According to a blog post at Sightings, an outlet published by The University of Chicago’s Martin Marty Center for the Public Understanding of Religion, conservatives have made similar arguments about everything from, “Marxism to socialism, liberal progressivism, [and] Silicon Valley capitalism,” all of which also combined the Christian eschaton with its own worldview.

Critiquing secular ideas about the eschaton isn’t a niche market for right-wingers, however. In “God and Gold: Britain, America, and the Making of the Modern World,” historian Walter Russell Mead traced the Christian, or, Abrahamic origins of today’s secular ideologies not to discredit them, but to explain how they influence domestic political movements and foreign policy. (RELATED: Is Meritocracy Undermining Christianity?)

The Abrahamic understanding of history teaches that events are “part of a narrative that extends back into the misty prehistoric past and forward to some unimaginable climax in the future.” Liberalism borrowed from Abrahamism the idea that history has a “shape and purpose: a beginning, middle, and an end”: Humanity began prehistory in a state of natural freedom. The first despotic governments sank it into an era darkened by class warfare, wars over religion, and arbitrary state rule. History ends when representative democracies, religious liberty, free markets, and low tariffs between trading countries fulfill liberalism’s purpose to create a “peaceful, liberal, and prosperous world order.”

Climate activists (and most secular liberals) fall under the category of what Mead called “Unconscious Abrahamists,” or, “those whose mental and political worlds are shaped in an Abrahamic context without the influence of a conscious religious belief.” In the climate activist’s version of history, Earth’s “Garden of Eden” spanned the years that preceded the Industrial Revolution. Man fell into history when he began to deforest the world and burn carbon-emitting fossil fuels to shelter his offspring and grow the economy. The last days will come when his refusal to recognize the “integrity of non-human nature” causes a global catastrophe that destroys the planet as we know it. An eschaton.

Appropriating Abrahamic themes isn’t likely to make climate cultists treat their political opponents amiably. “Wars of religion are largely an Abrahamic trait, found among the Abrahamic peoples and, in self-defense, among their neighbors,” Mead wrote. A survey of the news stories coming out of the world of climate activism shows that even secular citizens who claim to be relativists share the Abrahamic faiths’ tendency to insist upon the universality of truth. And like the warring sides in conflicts past, they intend to shape human beings and political institutions to reflect that understanding.

Climate cultists so far haven’t organized to resist the carbon-emitting powers by the sword, but they have assumed responsibility for remaking civilization in their image. Ocasio-Cortez became an icon of climate cultism when she proposed the Green New Deal in February. The bill alleged that “human activity” is melting glaciers, and increasing the rate of occurrence of wildfires, severe storms, and droughts. If the earth warms “two degrees Celsius beyond pre-industrialized” temperatures, she warned, 99% of coral reefs will go extinct and over 350 million people will fall victim to “deadly heat stress.” (RELATED: Climate Activists Love Ocasio-Cortez’s Green New Deal, But They Don’t Know What’s Actually In It)

Ocasio-Cortez also catastrophized that the climate crisis will cause the American economy to crumble. She predicted the United States will lose $1 trillion dollars caused by damage to public infrastructure and “coastal real estate.” This detail likely hit home with AOC’s big-money donors and members of Congress.

The Green New Deal counted pilots, farmers, and coal miners together. It proposed that we mobilize the country to a degree not seen “since World II” to purge the earth of farting cows and airplanes. To get there, we must first “overhaul transportation and agriculture,” which is to say the federal government must shut down transportation and agricultural industries as they currently exist. These policies will guarantee that the United States emits “zero greenhouse gases.”

Greta Thunberg, a 16-year-old of Swedish origin, bore witness to Ocasio-Cortez’s testimonial when she addressed the United Nations in September. “My message is that we will be watching you,” Thunberg began before an audience of world leaders. She upbraided the carbon-emitting civilization that transmitted her image around the world crowing, “you have stolen my dreams.” Even 50% cuts won’t suffice to heal the planet. “If you choose to fail us,” she concluded, millennials “will never forgive you.”

The climate gospel of Thunberg and Ocasio-Cortez is spreading. Extinction Rebellion, a British environmentalist group, recently blockaded thoroughfares in London to “address the climate crisis.” It entreats its followers to create a “world that is fit for generations to come.” And hopes to regenerate our culture by making it “healthy, resilient, and adaptable.” Its members actively hose nonbelievers with fake blood. What does this mean for us?

No civilization has a pass to trash the planet, of which the post-industrialized world is guilty. Nevertheless, climate cultists have amalgamated ideas that should not mix. The heirs of the Wicker Man should not be flattered to think that they can deliver humanity’s salvation. Despite their talk of bringing us together, neo-pagans behave like people unfit to rule. They mock climate skeptics, prophesy phony predictions, worship themselves more than “Mother Earth,” and threaten to harm us unless we do what they say.

Perhaps we can. The concept of “solar geoengineering,” which would have us blast particles into the atmosphere to reflect the sun’s rays back into space to cool the planet, is gaining favor among climate scientists. Research is ongoing, though it appears we’ll be spared after all.

Dion J. Pierre is a writer at large and lead author of “Neo-Segregation at Yale.” His work has appeared in National Review, The Daily Signal, and The Wall Street Journal.