A wrestling referee who made the explosive claim that Rep. Jim Jordan ignored his complaint about a sexually inappropriate advance by an Ohio State University sports doctor appears to have given an inconsistent account of the Ohio Republican’s knowledge of the incident, according to a former OSU wrestler and a Daily Caller News Foundation investigation.

The referee, identified as John Doe 42, said in a class-action lawsuit filed on Nov. 7 he told Russ Hellickson, a legendary former head OSU wrestling coach, and Jordan, a former assistant to Hellickson, that he was sexually abused in the mid-1990s by Richard Strauss, who served as chief physician for OSU’s athletics department from 1978 to 1998.

When reached by phone twice last week, Feeney did not deny that he was John Doe 42 but instead refused to discuss the John Doe 42 allegations and Jordan. He did not confirm being John Doe 42, but instead asked the DCNF to name the source who identified him as such. Feeney also offered to put the DCNF in touch with lawyers handling lawsuits against OSU, but he did not identify the attorneys and did not follow through with the offer.

Reached by phone again on Nov. 11 and asked about being John Doe 42, Feeney replied, “I don’t know what you want me to say,” and hung up the phone.

In the suit, John Doe 42 says he told Hellickson and Jordan that Strauss masturbated in front of him in the shower and commented on his penis.

“Yeah, that’s Strauss,” Jordan and Hellickson replied, according to the referee, who did not say which of the coaches made the remark or if they did so simultaneously.

Contrary to the claims of John Doe 42, Feeney wrote on social media in July 2018 that he did not know whether Jordan and Hellickson were aware of abuse allegations against Strauss, who is accused of abusing 177 student-athletes during his time at OSU.

“Did Jordan refuse to do anything?? Hell if I know,” Feeney wrote on July 3, 2018, after NBC News published a story alleging that Jordan and Hellickson turned a blind eye to Strauss’s abuse of wrestlers.

Jordan and Hellickson denied being told that Strauss abused or assaulted wrestlers.

“Let’s hope this is true,” he wrote regarding a story the next day about Jordan denying knowledge of Strauss’s actions.

In other contemporaneous posts, which Feeney has since blocked from public view, he insisted that he had “NEVER” accused Jordan of lying when he denied knowing of allegations against Strauss, who committed suicide in 2005. He made multiple other posts saying that he did not know for certain whether Jordan and Hellickson were ever informed of Strauss’s abusive behavior.

Feeney once held a favorable opinion of Jordan, who has been in Congress since 2007. But that sentiment has changed in the Trump era. Feeney’s social media accounts, which he locked down on Nov. 12, are a steady stream of anti-Trump criticism.

“Under [President Donald] Trump, thuggery has replaced democracy,” he wrote on Oct. 13.

Jordan is one of Trump’s most ardent defenders on Capitol Hill.

In a 2013 social media post, Feeney called Jordan “one of the good guys.” In 2016, he referred to Jordan as “my buddy” and offered to serve as chairman of his congressional campaign. On June 28, 2018, he lamented writing Jordan in for president because of his defense of Trump during the Russia investigation.

NBC News first reported the allegations of John Doe 42, who is one of 43 plaintiffs accusing OSU of turning a blind eye to Strauss’s abuse.

John Doe 42 said Strauss masturbated in front of him during a shower after a wrestling match and rubbed his body up against him, according to the lawsuit.

“John Doe 42 left the locker room, and told Coach Hellickson and Assistant Coach Jordan that he had found Dr. Strauss ‘whacking off in the shower.’ They responded, ‘Yeah, that’s Strauss,'” the lawsuit says.

A person claiming to be John Doe 42 also spoke to NBC News, which aired a Nov. 8 segment on the story on “NBC Nightly News.”

“It was common knowledge what Strauss was doing, so the attitude was it is what it is,” he told the outlet, without being identified.

“I wish Jim, and Russ too, would stand up and do the right thing and admit they knew what Strauss was doing, because everybody knew what he was doing to the wrestlers,” John Doe 42 said. “What was a shock to me is that Strauss tried to do that to me. He was breaking new ground by going after a ref.”

MSNBC anchor Chris Hayes touted the story on Nov. 11, noting that House Republicans consider Jordan one of their best weapons in the Democratic-led impeachment inquiry against Trump.

Jordan denied the referee’s allegations as “ridiculous” in an interview with his hometown newspaper.

“This is someone making a false statement,” he told the Lima News on Nov. 11.

Hellickson also denied the allegation that a referee ever told him of abuse by Strauss.

“This referee’s story related to me is nonsense. It never happened,” he told the DCNF in a phone interview.

The attorneys handling the lawsuit did not respond to detailed questions about Feeney. Multiple messages left with a receptionist for Smith Law Office, the Columbus, Ohio-based firm that filed the class-action lawsuit, were also not returned.

There is ample evidence pointing to Feeney as John Doe 42.

The lawsuit describes the referee as having been in his mid-40s at the time of the alleged incident, in the mid-1990s — details that also fit Feeney.

Feeney and 77 other alleged Strauss victims signed an open letter published on Oct. 18 calling for a change to laws regarding the statute of limitations for sex abuse cases. Public Justice, a public advocacy group that is working with Smith Law Group and Emery Celli Brinckerhoff & Abady, has handled public relations for both lawsuits. The firm helped with the publication of the open letter.

Feeney has also said on social media that his testimony about Strauss is included in a May 15 report law firm Perkins Coie published regarding OSU’s handling of the Strauss allegations.

Feeney told George Pardos, a former OSU wrestler, on May 17 that he contacted the law firm that investigated OSU and Strauss and that some of his testimony was in the Perkins Coie report.

The Perkins Coie report contains one account from a referee, and it describes one that matches closely to what John Doe 42 alleges in the recent lawsuit — except without any mention that the referee told Jordan or Hellickson.

The Perkins Coie lawyers who wrote the report declined comment about whether the referee mentioned telling Jordan and Hellickson about Strauss.

Feeney has remarked on his social media accounts to having an encounter with Strauss. But he has also made it clear in those posts that he did not know whether Jordan and Hellickson knew about Strauss’s inappropriate behavior. (RELATED: Former Wrestling Coaches Come Out In Support Of Jim Jordan)

“I have a story about the Dr and I might go to the law firm investigating the allegations but that I will decide at some point. There are more than wrestlers at OSU that are coming forward … gymnastics etc. … and others,” he wrote. “So … did Jordan turn a blind eye? Did Hellickson? … I don’t know. Hope not.” 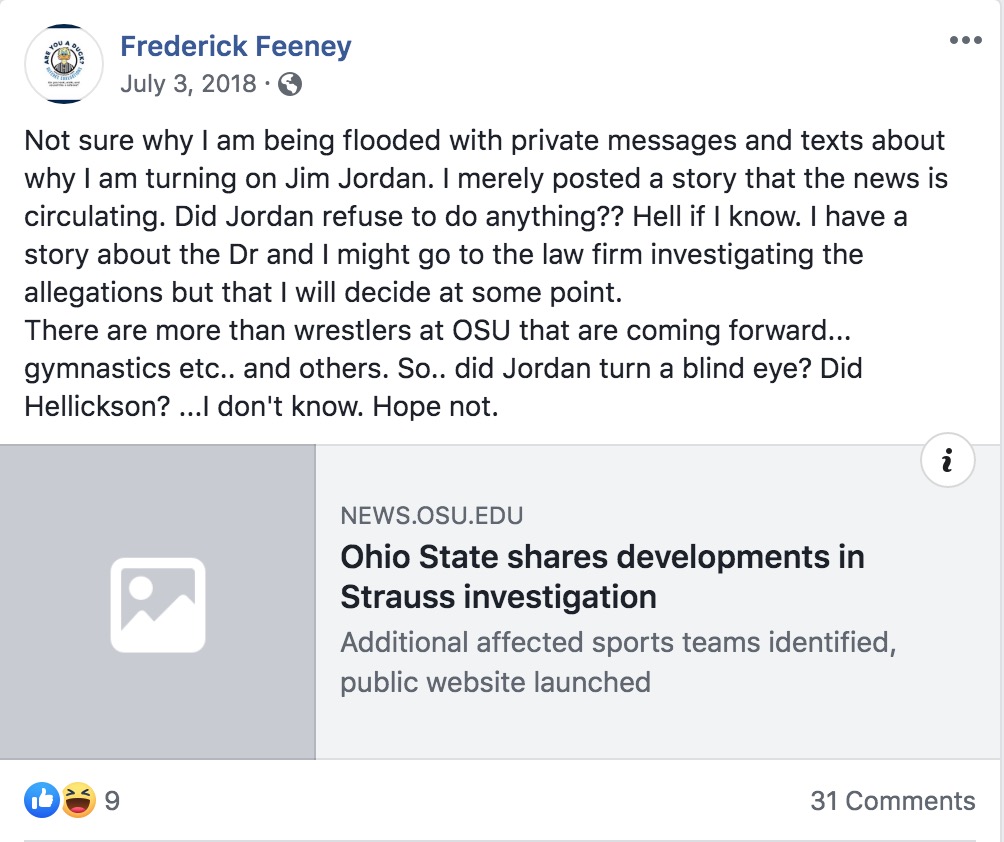 Feeney indicated in another exchange with Pardos that he had no knowledge of what Jordan and Hellickson knew of Strauss’s behavior.

After Pardos disputed stories about the coaches ignoring abuse allegations, Feeney wrote: “[H]ow do you know what Jim knew and didn’t know? Surely he was aware of the situation as there have been tons of people reaching out to the investigators … did he tell you he knew and he reported? Just asking.”

“Hell he came in my damn locker room and took a shower as I was…no touching but weird conversation. I wrote it off as him being … strange and stayed the hell away from him afterwards,” he added, notably without claiming to have told Jordan and Hellickson.

Feeney’s comment that he experienced “no touching” from Strauss would appear to rule him out as John Doe 30, who said in the lawsuit Strauss “fondled” him while receiving a sports wrap. 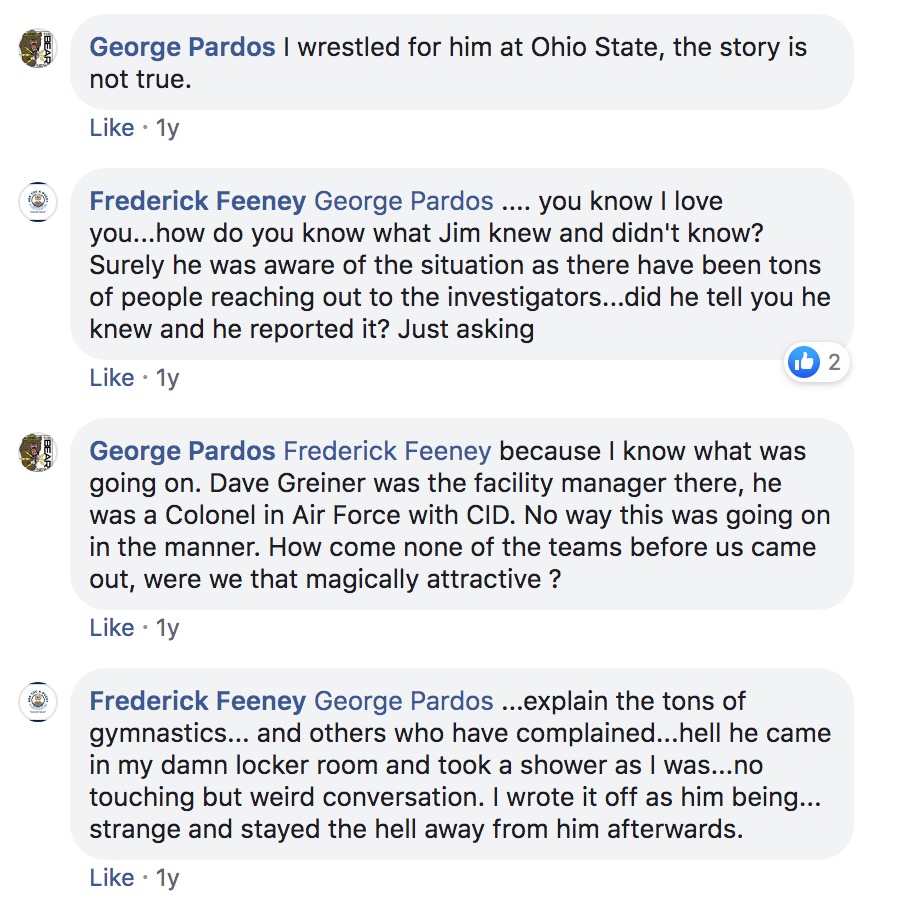 “I am not defending Strauss, what I am saying is what Jimmy knew about it,” Pardos to Feeney in a later post, referring to Jordan. “Strauss was a weird duck, no doubt about it. Jimmy is an honorable man.”

The day after that, Feeney walked back a claim he had previously made that Hellickson knew about the abuse.

“I now do not believe Russ knew as he has never publicly stated that. Who did and didn’t know … I don’t know,” he wrote. 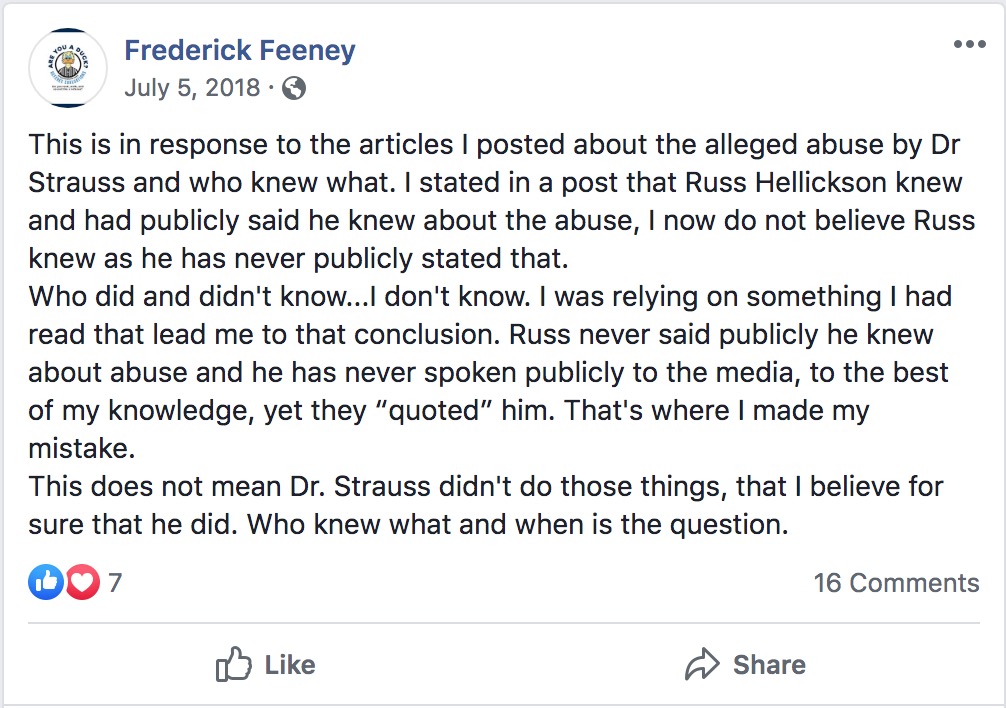 In a July 7, 2018, post, Feeney again indicated that he did know whether Jordan and Hellickson knew of allegations against Strauss.

One of Feeney’s Facebook acquaintances pressed him on whether he was accusing Hellickson and Jordan of lying about their awareness of Strauss’s abuse.

“I know for a fact what Strauss did … that is NOT the question … the question is … who knew what and when,” he continued. 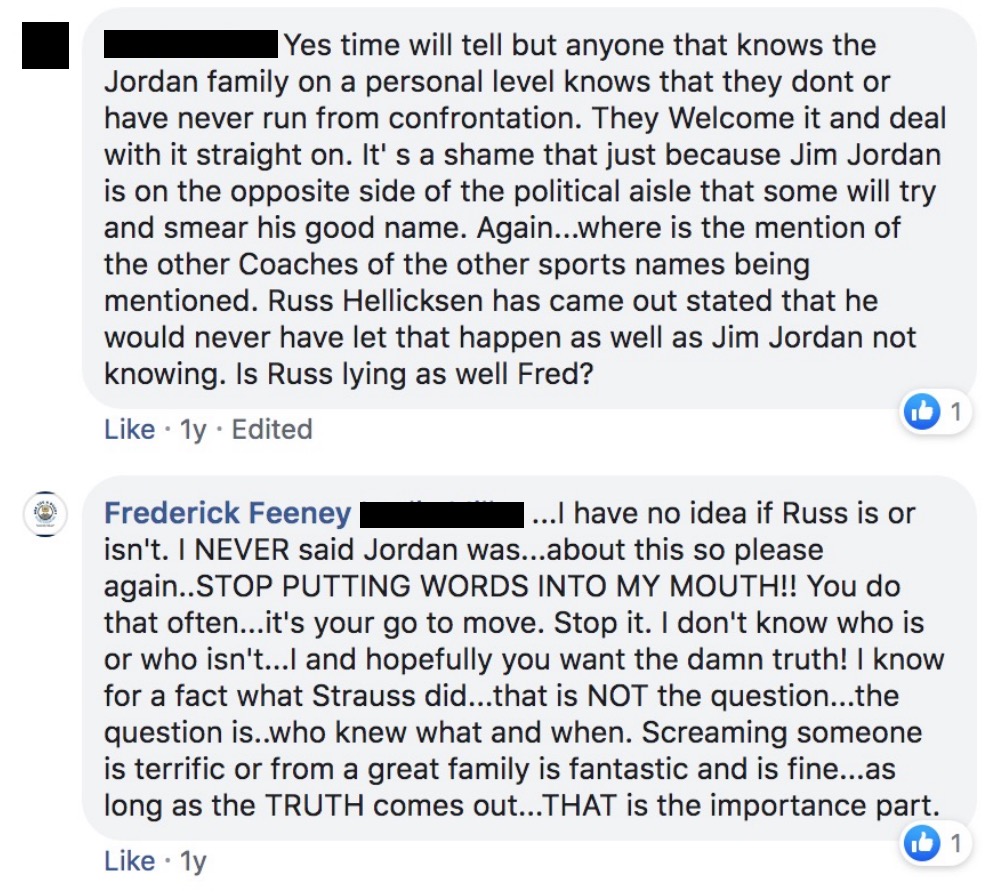 NBC’s latest report gained widespread attention thanks in large part because Jordan was appointed the same day to the House Intelligence Committee, which will oversee impeachment hearings for Trump.

NBC touted the story as corroboration of its reporting in 2018 that a former OSU wrestler alleged that Jordan and Hellickson turned a blind eye to Strauss’s activities.

Several other wrestlers initially came forward to claim that Jordan and Hellickson had to have known about complaints against the physician because his behavior was openly discussed in the locker rooms. Some of those wrestlers later walked back their stories or were found to have made inconsistent statements.

Only one former wrestler, Dunyasha Yetts, has said to have talked directly with Jordan about Strauss. Jordan vehemently denied knowing that Strauss abused athletes. Jordan’s defenders have called Yetts’ credibility into question because of numerous legal issues he’s had over the years. Yetts served 18 months in prison beginning in 2007 for his involvement in a $1.5 million mail fraud scheme. A judge sentenced him to a 60-day jail term in January 2012 for violating the terms of his probation.