A suburban Chicago woman told the Daily Caller that police, the courts, and the Department of Child and Family Services (DCFS) all ignored numerous warnings about her former partner. Now her two year-old son is dead.

On October 31, 2019, at approximately 9:50PM Kara Witkowski’s two-year-old son was found dead at the home of her ex-boyfriend, Thomas Biel.

“He was found in the master bedroom and his lips were blue,” Witkowski said of her son.

At the time of her son’s death, Witkowski was barred from seeing either of her two children by court order of Judge John Dalton of the Illinois 16th Circuit and upon the recommendation of DCFS. Dalton has not responded to the Daily Caller’s requests for comment, though it is standard procedure not to comment on ongoing cases.

Witkowski went to the Palatine Police Department on April 19, 2019, after noticing a bruise on her daughter’s lower back; her daughter is three years old.

“On 3/26/19, I received a child abuse neglect report from DCFS investigator Amanda Patricoski. The report stated that Kara Witkowski had taken her three-year-old daughter to Advocate Medical Group on 3/25/19,” the Elgin Police Department report stated, “Kara reported to Dr. Valina that (Witkowski’s daughter) had small bruises on the back of her leg after being cared for at her paternal grandfather’s house.” (RELATED: Florida Man Faces Child Abuse Charges After Throwing Son Into The Atlantic Ocean, Says He’s ‘Going To Jail For Being Awesome’)

During the same investigation, Witkowski brought her daughter in again on April 19, 2019, once again saying her daughter had a bruise.

“Later that evening [April 19], Kara made another report alleging physical and sexual abuse of [Witkowski’s daughter] by her paternal grandfather,” according to the officer who wrote the report.

Witkowski took photos of the bruise and one of her friends, who witnessed the bruise also stated as such in a subsequent police interview.

But according to Palatine Police, they found no such bruise.

“I advised Morell that I had seen [Witkowski’s daughter] here at the station on 4/20/19 and she had been examined by DCFS and no bruises were observed,” the police report stated.

Biel and his parents also denied anything untoward happened during the April 19, according to the report.

This observation is contradicted by the conclusion of medical staff at Northwest Community Hospital which found a contusion, according to hospital records, when Witkowski’s daughter was examined on April 19.

“Both incidents have been investigated and will be classified as unfounded. There will be no criminal charges stemming from either incident due to a lack of evidence and no corroboration of the allegations,” Detective Robert Bice of the Palatine Police Department stated in an email to Witkowski. (RELATED: Child Exploitation Is Cool Again!)

“If anything happens to my daughter, I will hold you and your department responsible,” Witkowski responded back to Bice in an email on May 14.

Detective Bice did not respond to an email for comment.

DCFS also closed the case concluding the allegations were unfounded as well.

These were not the only allegations Witkowski made against her ex-boyfriend.

On March 22, Witkowski reported Biel to the Elgin Police Department, alleging he raped her.

Witkowski said it was the second time Biel had raped her — the first being August 2018 — and Biel seemed to admit to that rape in a series of text messages.

“Stop pretending like we were ever going to be as we were before I raped you,” Biel stated to Witkowski in a subsequent text message. 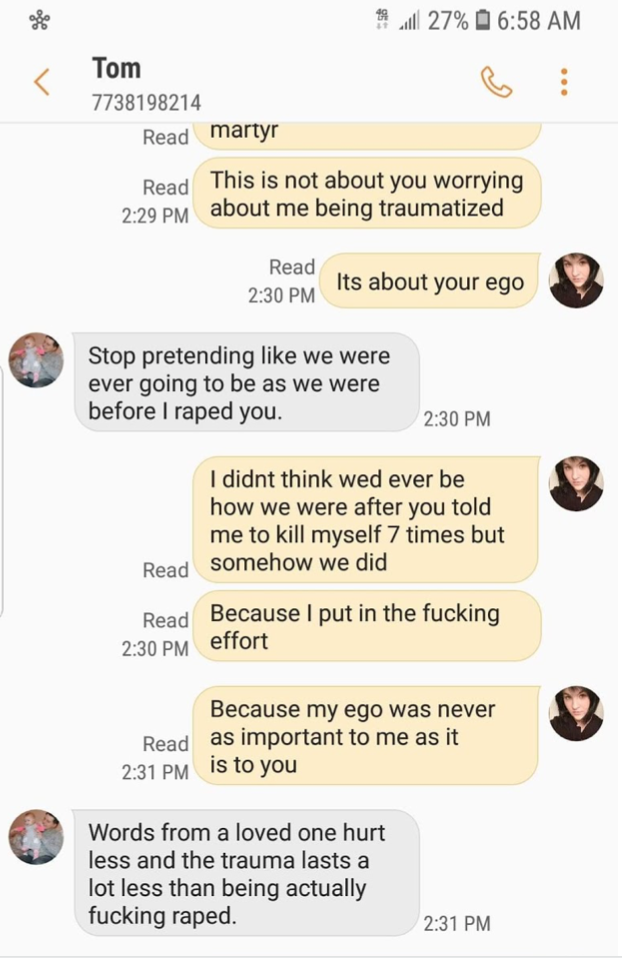 On March 28, Witkowski reported Biel to the Elgin Police Department again, after she found a flash drive with child pornography on it.

While Biel was arrested, he was never prosecuted; Witkowski did receive an order for protection from Judge Dalton which forbade Biel from seeing his children until it was lifted for his April 19 visit.

On April 21, in a video Witkowski recorded, her three year old daughter disclosed that Biel’s father was touching her son inappropriately.

Referring to her bathing suit area, Witkowski asked her daughter, “did someone hit you there today?”

Witkowski’s friend, who spoke with her daughter, stated in part in a letter to the court, “Last week, she had one of those days. Only, when I asked her what was wrong, she stared at me, said grampa hit her bathing suit zone, completely spaced out for a solid 2 minutes, then for no reason I could find, she randomly would just yell ‘Smile’ and force a smile. She also told me that Daddy and Grampa have been hitting her and James in the face and the bathing suit zone. I’ve seen bruises on her that match her story, but hardly ever see any marks on James.

“I genuinely am concerned that [Witkowski’s daughter] is being abused in both a physical and sexual way and that Jerry Biel is largely the man who is abusing Sasha in such manors [sic] based off of the way that Sasha acts and the count of times she has flat out told me about these incidents.”

After police and DCFS closed their investigation, Witkowski said it was she who Judge Dalton, the judge on her family court case, treated as the unfit parent.

When Witkowski asked for an emergency motion to temporarily bar Biel from seeing the two children to be heard on May 2, she said Judge Dalton refused to allow any evidence and ordered a conference; he denied the motion.

“I believe neither she nor Kara can see the harm that continual, repeated, false reports cause the children. Kara and her camp seem so singularly focused on destroying Thomas that they can’t see how harmful their actions have long term impacts on the children,” Pirtle stated in a September report.

Pirtle did not respond to a message left at her office.

Witkowski said she didn’t attend because her lawyer was planning on withdrawing and didn’t expect any court business to be heard; Witkowski said Biel’s attorneys argued that she had Post-Traumatic Stress Disorder (PTSD) as a reason to change custody.

She was then relegated to supervised visits.

She said, “my children are repeatedly coming home to me with marks and bruise(s),” she said about the condition of her kids during this period, in an August 2019 interview with Northwest Liberty News.

She said she took photos and continued reporting to DCFS. 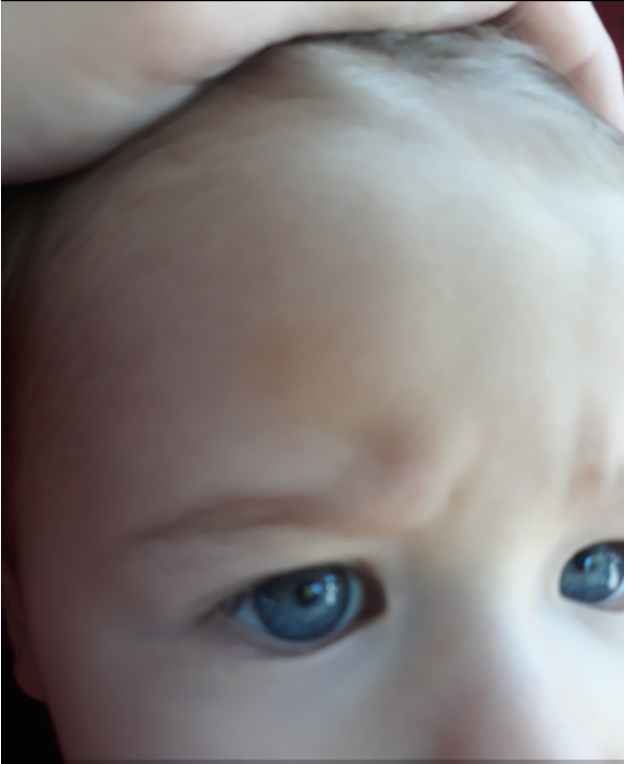 A photo Witkowski took of a bruise on her son’s head, following a visit with his father. Photo provided by author.

In June, Witkowski received a series of voicemails from Lawrence Riordan, a friend of Thomas Biel’s, suggesting that if she did not stop posting material related to her case on Facebook, her son’s life would be in danger.

“You’re putting your own children’s lives in danger; what kind of a f$%king person are you,” Lawrence Riordan stated in one of four voicemails from Riordan left.

Palatine police interviewed Riordan as a witness regarding the April 19 incident, though he told them he found nothing wrong.

Witkowski brought the voicemails to the Elgin Police Department and they were submitted as evidence.

In August, Biel informed her that her son, who was still only one, was taken to a nearby hospital for a prolapsed rectum, which is when the rectum loses its normal attachments inside the body.

Despite this, she said DCFS told her in August she would no longer see either child.

Witkowski said the same agencies that bungled her previous reports, Palatine police and the DCFS, are now investigating her son’s death.

Local press, based on information from Palatine Police, reported days after the death of her son that the police did not suspect he was murdered.

Witkowski said this showed they weren’t looking for the truth, since the autopsy had not even been completed before this claim was made.

In one conversation she had with a Palatine Police detective, the detective seemed to suggest that murder was unlikely.

“They’re [Biel’s family] very distraught; I know you’re at odds with them and you know for whatever it’s worse, I saw a lot of heartbreak last night,” a Palatine detective told her in a call in early November, “You have to look at motive, what would be the motive to doing that, and whether or not someone would be smart enough … Without the medical examiner, who does this for a living, noticing it, It seems very unlikely.”

According to the initial reports, there were no signs of body trauma or strangulation.

Witkowsi said she found the conversation odd and believed the police were already building a narrative to excuse her ex.

“They’re not looking for justice for my son,” she said.

In another conversation, the detective said he was unaware that Riordan had left voicemails on Witkowski’s phone suggesting her kids were in danger. (RELATED: Grand Jury Report Details Decades Of Child Abuse By Hundreds Of Accused ‘Predator Priests’)

Commander Bryce Baker declined to comment on the investigation beyond a press release from November 1, the day after the death. “At this time, no foul play is suspected and there are no persons of interest in custody of the Palatine Police Department,” the statement reads.

Witkowsi said her daughter was placed with her paternal grandmother by DCFS; despite her son’s death, Dalton’s order barring her from seeing her children remains in place.

Witkowski ordered a private autopsy on her son. According to preliminary results, there was bruising on her son’s right lower back; the bruising was not on the skin but in the muscle.

The autopsy also found discoloration on his face around the nose and upper lip.

This was consistent with strangulation but also many other things.

Witkowski said that the Cook County Medical Examiner’s Office did not tell her they would be holding onto these organs when she made arrangements with them regarding the private autopsy.

Natalia Derevyanny, the Director of Communications at the Cook County Bureau of Administration, did not respond to a voicemail and email for comment.

Kathy Davis, a spokesperson for DCFS, did not respond to an email for comment.

Scott Sheen, Biel’s attorney, did not respond to a message left at his office.

Update: The Kane County court provided a statement after publication regarding Judge Dalton, saying, “He is not allowed to comment on ongoing cases due to ethical obligations.”