A group of immigration activists Tuesday vandalized and locked themselves onto GEO Group property, a private contracting company that operates numerous migrant detention centers across the U.S.

Protesters gathered at GEO Group’s headquarters in Boca Raton, Florida, and demonstrated for the release of illegal immigrants under detainment. Several activists cemented themselves in front of the building’s entrances, making it difficult to remove them, while others chanted and held signs.

Photos of the scene indicate the protesters also defaced company property by spilling paint across its outside walls.

“We are stopping all operations,” an activist with the group, Flavio Franco, said Tuesday, according to the Sun Sentinel. “We demand that Geo Group liberate all undocumented people in jail.” 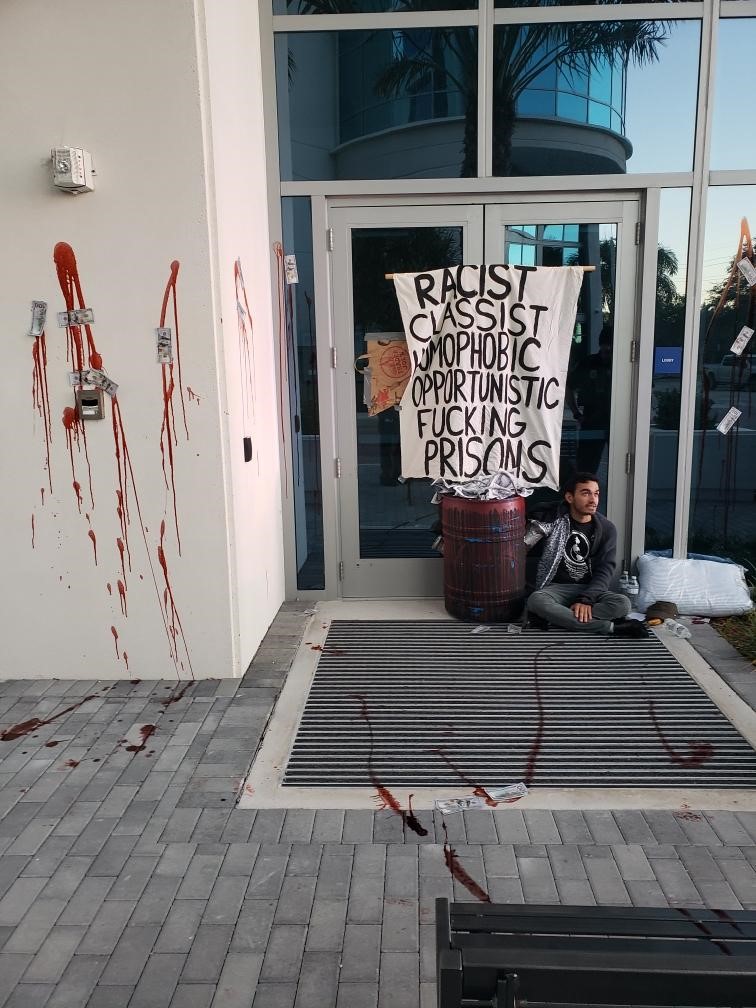 Protesters circulated a list of demands to those nearby. Among its many requests, they called for the abolition of Immigration and Customs Enforcement (ICE), the “dismantling” of borders, and the “abolition of all prisons and an end to slavery.”

Local law enforcement eventually sealed off the parking lot and arrested those who were cemented at the front of the company’s entrances.

GEO Group criticized the protesters’ actions in a subsequent statement.

“The dishonest narrative and lies that are being spread about the services our company provides is based on the same false rhetoric that has led to the endangerment of our employees, of government employees, and the public,” a GEO Group spokesperson said in a statement provided to the Daily Caller News Foundation. “The safety of our employees is our top priority, and any violence, vandalism, or destruction of property at any of our facilities and offices will not be tolerated.”

This is far from the first time that GEO Group — a private company that specializes in detention, and does contract work with ICE — has been targeted by immigration protesters. Some of the demonstrations in the past have been much more violent.

Dozens of immigration protesters in Colorado, including members of Denver Communists and Abolish ICE Denver, demonstrated in front of GEO Group executive Johnny Choate’s home in September, where he lives with his wife and children. The protest, which attracted around 100 people, lasted into the night and eventually forced local police to make several arrests.

There was an overnight shooting in San Antonio, Texas, in August that left several ICE and GEO Group office windows shattered. FBI investigators later concluded the shooting was a targeted attack against the agency and GEO Group.

In the most notable of example of violence, a man with ties to Antifa was killed by police in July when he tried to firebomb an ICE detention center in Tacoma, Washington. That facility, the Tacoma Northwest Detention Center, is run by GEO Group. A manifesto belonging to the would-be terrorist referred to migrant detention centers as “concentration camps.”

The GEO Group spokesperson decried the uptick in violence against the company.

“We have been a trusted service provider to the federal government for over 30 years, under Democratic and Republican Administrations, and the services we provide today are in no way different from the high quality, professional services we provided for eight years under President Obama’s administration,” the spokesperson said. (RELATED: At Least 20 People Dead After Cartel Shootout Near Southern Border)

“Like all Americans, we’re concerned about the unprecedented humanitarian and security crisis at our Southern border. While policymakers deliberate on the best way to address this challenge, we will continue to provide the highest standard of humane residential care at all of our facilities,” the statement continued.