Globalists who have been most alarmed by President Trump’s “America First” agenda and its influence on NATO policy and dealings with Eastern Europe have turned to criticizing popularly elected conservative governments in Central Europe to push their cause. And they have allies in Congress.

Case in point: the House Subcommittee on Europe, Eurasia, Energy, and the Environment recently held a hearing with the anodyne title of “Democracy and the NATO Alliance: Upholding our Shared Democratic Values.” Intent on shaping perceptions rather than finding facts, the hearing beat an unchallenged narrative arc of “democratic backsliding” that attempted to link Hungary and Poland with Turkey and Russia in testimony that was as negative as it was unbalanced.

The constitutional objectives of building and securing strong nations, rather than capitulating to the designs of European Union bureaucrats, were dismissed sans debate by witnesses who insisted without valid evidence that the reliable Central European nations were teetering in their dependability and democratic aspirations.

Asleep at the gate were subcommittee Republicans who failed to challenge the assertion that resisting a radical globalist agenda does not make a nation less democratic. In fact, both governments seeking to preserve their culture and values have overwhelming electoral support.

The truth is that as countries who suffered under the Soviet boot for decades, Hungary and Poland fear Marxism and respond accordingly. Having reclaimed their national sovereignty, they remain vigilant against EU soft-power efforts to take it away. For Central Europeans, the bargain was never to trade the hard power domination of the Soviets for centralized control in Brussels. And the liberation of Central Europe was the reason America fought the Cold War. 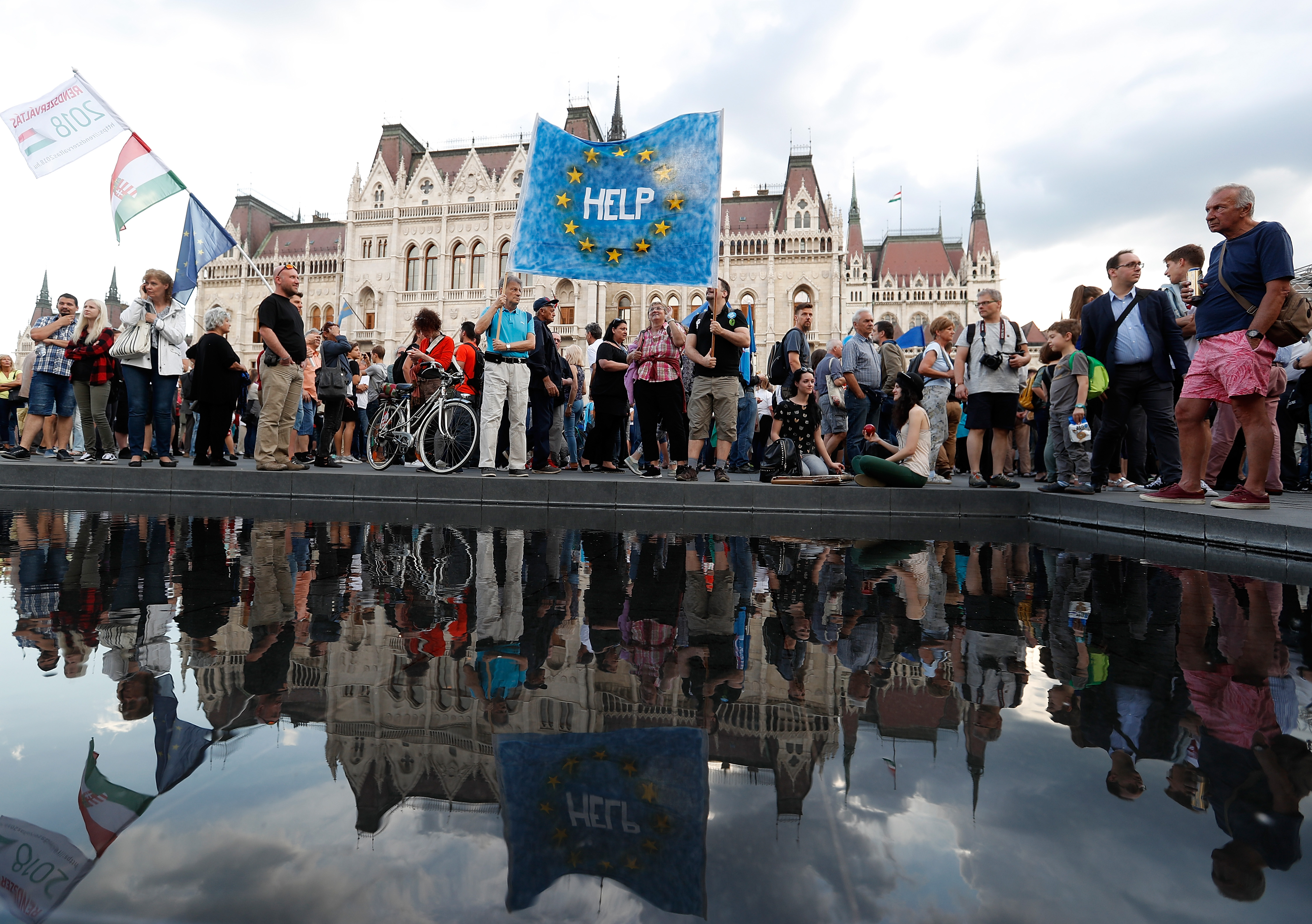 BUDAPEST, HUNGARY – MAY 08: People protesting against the new Hungarian government demonstrate outside the Hungarian Parliament building on May 8, 2018 in Budapest, Hungary. (Photo by Laszlo Balogh/Getty Images)

Most disturbing — but unchallenged by the Republicans — was that the testimony to the subcommittee was choreographed; the NGOs were more closely affiliated than was disclosed. For example, the first two panelists were Susan Corke, senior fellow and director of the Transatlantic Democracy Working Group (TDWG), an appendage of the The German Marshall Fund of the United States, and Melissa Hooper, director of Human Rights First. (RELATED: Sen. Bob Menendez Obstructs Key Votes In Foreign Relations Committee)

Hooper is also on the TDWG steering committee, which is co-chaired by Norm Eisen of Brookings. For those paying attention, Qatar is a major donor to Brookings and has not been shy about the strategic role think tanks play in influencing Washington.  Two additional witnesses included Nate Schenkkan, representing Freedom House, where Sofya Orlosky, also of Freedom House, was also a member of the TDWG steering committee.

In other words, three of the four testifying NGOs are part of the TDWG, and all four are affiliated with left-wing billionaire George Soros’ Open Society and its complex network of influential organizations.

But not just the NGO witnesses. When subcommittee Chairman William Keating introduced Corke, he noted his own past involvement with the Marshall Fund. So close, in fact, is the relationship of TDWG with the GMF that the link on the TDWG webpage takes one to Corke’s GMF email.

What then is TDWG?  It appears to be a gathering of Obama alumni, socialist Europeans, Soros organizations and other international “progressives” intent on beating the globalist mantra at a time when democracy demanding real change is on the march not only in America but in Hungary, Poland, Austria, Italy, Brazil, the United Kingdom, and elsewhere.

Donors to the GMF/TDWG cause include $1 million or more from the Auswärtiges Amt, the German Foreign Ministry, the Regeringskansliet, Sweden’s Ministry of Foreign Affairs, USAID and the U.S. State Department.  Among those donating between $500,000 and $999,999 is the European Commission, an organization whose idea of promoting democracy includes monitoring the speech of European citizens in order to prosecute them. Also on the partner list is the Open Society Foundation.

Ironically, neither the European Commission’s monitoring of speech nor Germany’s active suppression of it citizens’ free expression through “hate speech” prosecutions were discussed during the hearing as indicators of real “democratic backsliding.”  Those seemingly dangerous attacks on liberty are of no concern to the TDWG.

This should concern Americans along with the fact that, through the TDWG, foreign ministries and organizations have undisclosed access to U.S. political and policy leaders and appear to be in a purposeful relationship with American deep-state counterparts. During the hearing, one was left wondering if the testimony reflected the coordinated activities of foreign ministries and the US State Department. Where was true congressional oversight, or disclosure of foreign influence? Why was the fix in against NATO allies whose democratically elected leaders are being excoriated by the EU precisely because they emulate the US in executing the will of the electorate?

The EU and Euro-NGOs are committed to suppressing national identity and sovereignty. At the core of the EU’s animus toward Hungary and Poland is their refusal to open their borders to unfettered mass-migration for fear of undermining their national identity. Germany, Sweden, the European Commission and Soros’ Open Society also seek leverage to suppress its upstart Central European provinces. (RELATED: How Central and Eastern European Governments Are Redefining Economic Conservatism)

As one peers into these NGOs, a “progressive” deep-state footprint emerges, not unlike the forces working in star chamber-like fashion to impeach President Trump here at home. Indeed, a cursory glance at Corke’s social media indicates they are one and the same, as did her testimony.  Before characterizing Hungary and Poland as “democratic backsliders” edging towards authoritarianism, both Corke and Hooper acknowledged supermajority victories mandating change from prior left-wing governments, yet when asked then to give her definition of corruption that indicates “backsliding,” Corke answered that it is anything that “holds back progress.”

But progress by whose definition? Democracy by whose definition? As a matter of due diligence, when the left speaks of democracy or accuses elected governments of “backsliding” for rejecting “progressive” policies, it’s time to account for how Marxism defines democracy — how terms, assumptions, and Orwellian baselines are pushed to become the new normal, and how Republican leaders like Adam Kinzinger — the subcommittee’s ranking minority — are neutered into what Marxists call a “controlled opposition.”

Hungary and Poland have seen this before.  Their borders have been breached, their cultural identities robbed. They have suffered through indoctrination and been forced to surrender the free speech and expression that Germany and the European Commission are seeking once again to deny them. The promising refrains of The Internationale still ring in their ears along with the evil designs of despots and the earnest intentions of useful idiots.

Before Soros there was Lukács.