“Do you believe Ukraine meddled in the election in 2016,” Todd asked Cruz.

“I do. And I think there is considerable evidence.”

The Sunday morning political talk show host then proceeded to suggest that the narrative of Ukrainian interference was a Trump conspiracy that was no different from many of the claims that the president made against Cruz when the two were battling for the Republican presidential nomination. (RELATED: Ted Cruz Slams UN For Defending Hamas Over Israel: It’s ‘Absurd And Dishonest)

“Senator, this sort of strikes me as odd because you went through a primary campaign with this president. He launched a ‘birther-ism’ campaign against you. He went after your faith, threatened to quote ‘spill the beans’ about your wife, about something. He pushed a National Enquirer story with which we now know he had a real relationship.”

As he spoke, a picture of the Enquirer story where Trump hinted that Cruz’s father may have been mixed up in the assassination of President John F. Kennedy appeared on the screen. The Democratic National Committee’s communications director also entertained the far-fetched notion at the time.

“You are dragging up all that garbage; that’s very kind of you,” Cruz said. Ukrainian President Volodymyr Zelensky has said he would “happily” investigate whether Ukraine interfered in the 2016 election.

Todd then asked, “Is it not possible that this president is capable of creating a false narrative about somebody in order to help him politically?”

Cruz rebutted: “Except that’s not what happened.” As far as Trump’s July 25 telephone call with Zelensky that apparently provoked the Democratic clamor for impeachment, Cruz said there was no evidence in the conversation that Trump was ordering Ukraine to investigate former Vice President Joe Biden in order to further the president’s political objectives. “The president released the transcript of the phone call. You can read what was said in the phone call.” 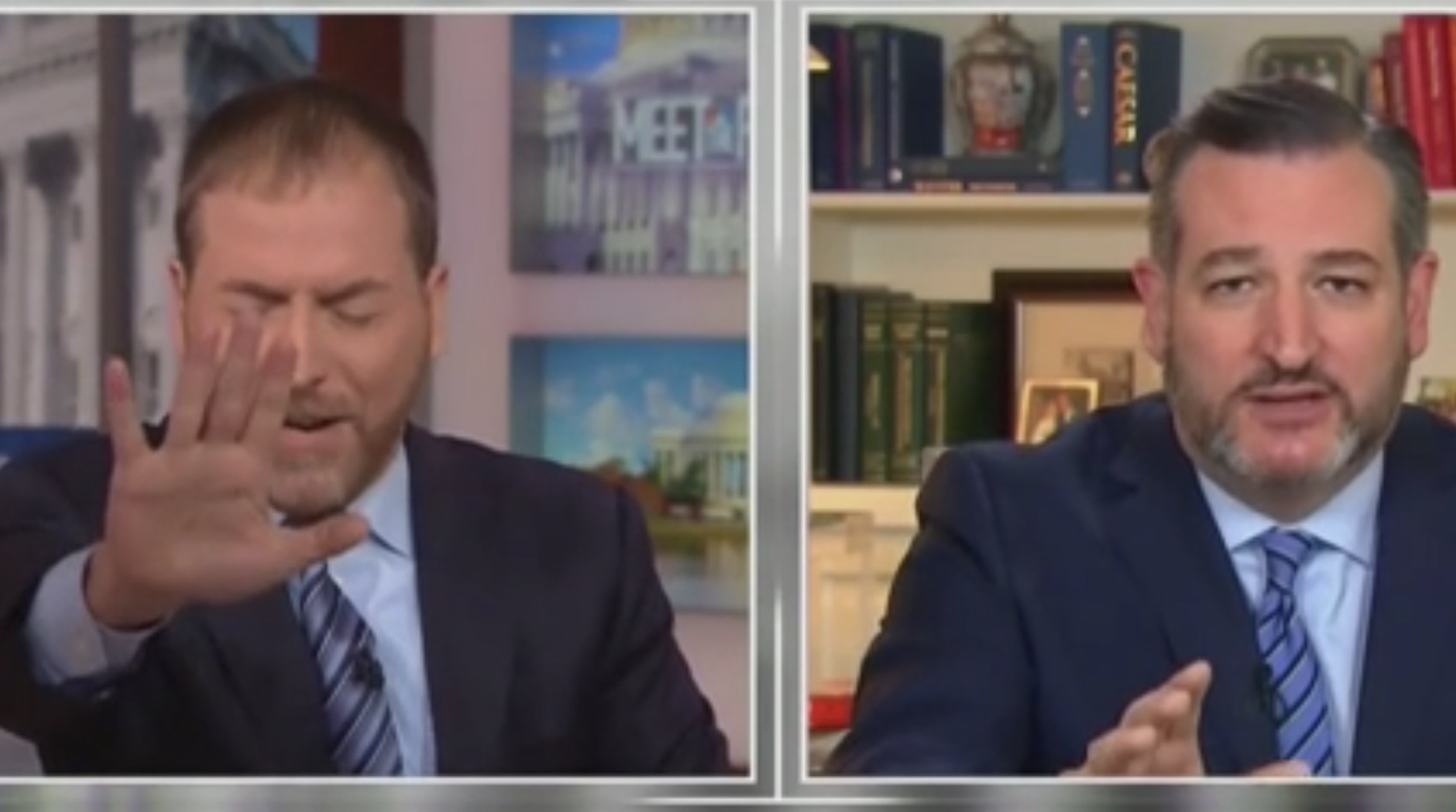 The senator also called out his host for saying the Trump administration may talk tough about Russia but doesn’t follow-up those words with actions. (RELATED: Ted Cruz Squares Off With Chuck Todd On The Threat Of Space Pirates)

“Substance matters. By any measure the president’s policy, this administration’s policy, has been tougher on Russia and actually better for Ukraine than Obama’s was,” he said, citing Trump’s concurrence with giving Ukraine “lethal javelin missiles to take out Russian tanks.”

Cruz noted that he “repeatedly pressed President Obama to give lethal aid to Ukraine … They sent teddy bears and MREs [Meals Ready to Eat]. They wouldn’t give weapons.”

After making his comments about Ukraine, Cruz was bombarded by critics who claimed he was advancing a Russian storyline.

Cruz responded, “John, this is a flat-out lie & you know it. You’re not supposed to be a partisan hack; you claim to be a ‘journalist.'”

John, this is a flat-out lie & you know it. You’re not supposed to be a partisan hack; you claim to be a “journalist.” Report on these FACTS: https://t.co/7Vp4eOLzdD https://t.co/mIn1gdrsO3

He buttressed his comments about Ukrainian meddling in the 2016 election by citing a Politico report that stated, “Ukrainian govt officials TRIED TO HELP [sic] Hillary Clinton and undermine Trump …”

The senator later accused both the media outlet Axios and Todd of “lying” about the “significant evidence of Ukrainian corruption” and that “they refuse to report it.”

6/x @axios & @chucktodd are deliberately LYING. They know there’s significant evidence of Ukrainian corruption, but they refuse to report it. When anyone points to actual facts, they scream “Russian conspiracy.” This isn’t journalism; it’s partisan propaganda. Chuck knows better.