Customs and Border Protection Acting Commissioner Mark Morgan praised the massive drop in immigration apprehensions at the southern border and noted Tuesday that human smugglers are losing business as a result.

Morgan led a roundtable discussion with reporters and detailed the latest immigration numbers, progress on the U.S.-Mexico border wall and his agency’s other accomplishments throughout the past fiscal year. The acting chief also spoke at length at how the fight against illegal immigration hurts organized crime the most.

“We have absolutely impacted the cartels’ ability to exploit the individuals, specifically families, from the Northern Triangle countries. Those numbers have gone way down,” Morgan told reporters. “We absolutely impacted their pocketbook. We have probably removed a couple billion dollars from their illicit criminal scheme to exploit these individuals from the Northern Triangle countries.”

The acting commissioner’s comments come as the number of illegal aliens attempting to cross the southern border have plummeted. 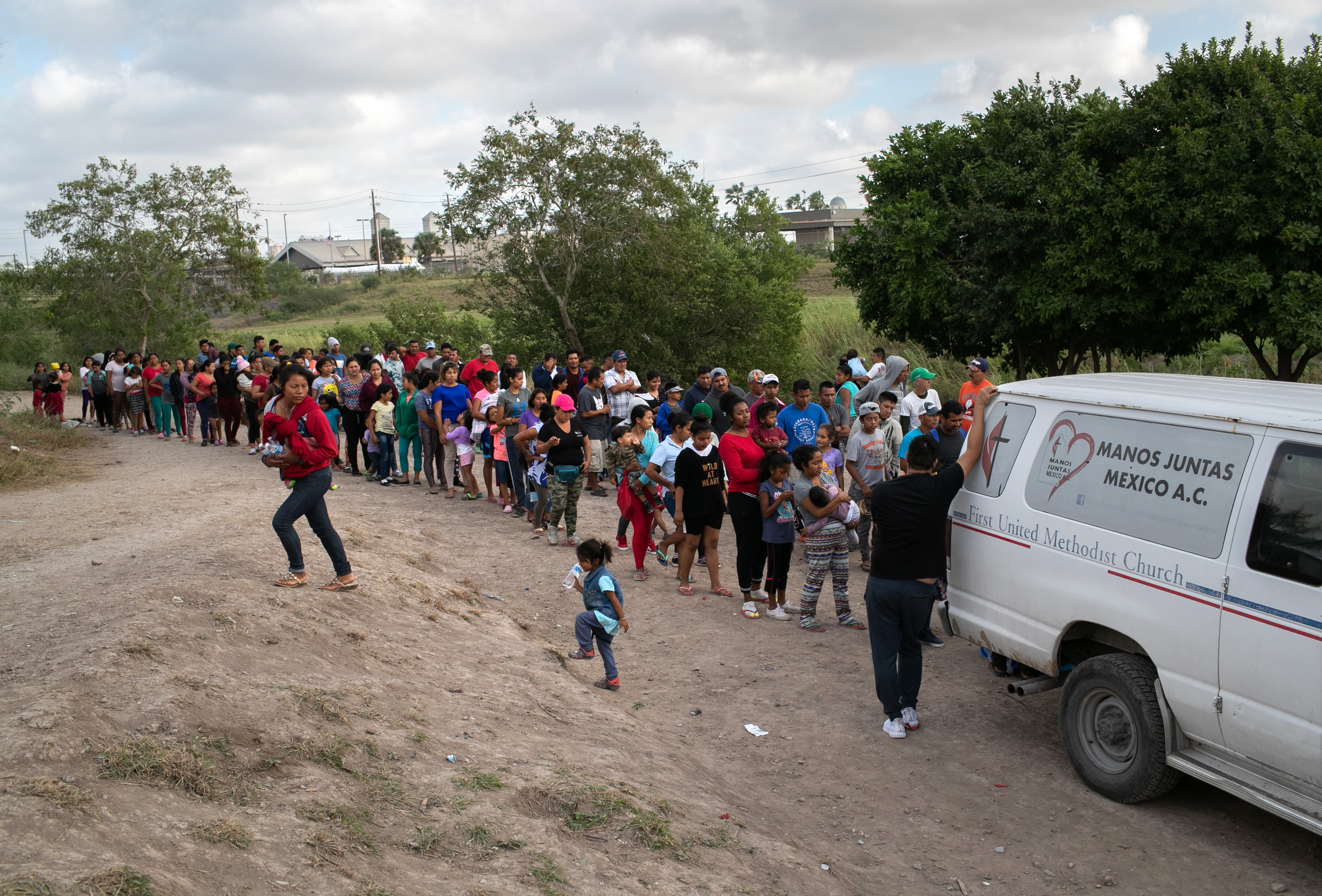 Asylum seekers wait for bottled water at an immigrant camp on Dec. 9, 2019 in Brownsville, Texas, across the river from the border town of Matamoros, Mexico. (Photo by John Moore/Getty Images)

There were roughly 144,000 illegal aliens who reached the U.S.-Mexico border in May, when the immigration crisis was its peak. In the six months since that time, Morgan said the flow of illegal aliens, specifically families from the Northern Triangle, has dropped by about 85%. In addition to this, he noted that “catch and release” has ended for about 95% of the individuals who are attempting to enter the U.S. illegally.

There are now about 1,400 border apprehensions a day, a steep drop from the daily apprehensions Border Patrol was experiencing six months ago.

This flow has stopped thanks to a number of initiatives implemented under the Trump administration, such as Remain in Mexico, metering and new asylum agreements that mitigate the number of foreign nationals who can win protected status in the U.S.

However, now that the flow of Central Americans has dwindled, Customs and Border Protection (CBP) is witnessing a larger share of Mexican nationals. The agency is also seeing a rise of non-continental migrants, such as Brazilians, Haitians and others. Morgan attributed this shift to changing tactics by cartels and others involved in the business of human smuggling.

“But — as the cartels do and what they always have done for decades and will continue to do – as soon as we make positive progress in one area, they change their TTPs, their tactics, techniques and procedures. That’s exactly what they did. So then they started to focus on Mexican nationals,” Morgan said and noted that cartels are paying for advertisements that encourage Mexicans to illegal migrate to the U.S.

Approximately 90 miles of new border wall has been built in place of “dilapidated and outdated designs” as of Dec. 6, according to CBP. The administration is currently working on hundreds of miles of new wall along the southern border. However, judicial road blocks, opposition in Congress and other government red tape has made it difficult for the White House to swiftly build border barrier.

Morgan said Tuesday it was difficult to know if the administration will reach its goal of 450 miles of new border wall by the end of next year; however, he said he’s confident it will come close. As Congress is currently working on a budget, there remains a partisan fight over funding for the wall. (RELATED: ICE Blames Sanctuary Cities, Border Crisis As Immigration Arrests Fall)

The CBP chief said he was “100% disappointed” that there are lawmakers who oppose wall funding and said it is an essential tool in the fight against illegal immigration and the transportation of illicit narcotics.

“So when I see Congress not being able to get together in a bipartisan manner to be able to fund what I see as an essential tool for us to perform our duty to protect this country, damn right I’m disappointed,” Morgan said.