The good news is that under tax and regulatory reform passed by the last Republican Congress, the economy is roaring and the number of people receiving food stamps is dropping. In fact, wages at the lowest end of the scale are going up the most, jumping the fastest in a decade.

The bad news is the number of people on the Supplemental Nutrition Assistance Program (SNAP) is still too high given there are more job openings than people applying for them in many communities. The last time unemployment was this low (half a century ago), fewer than half the number of recipients were receiving benefits. 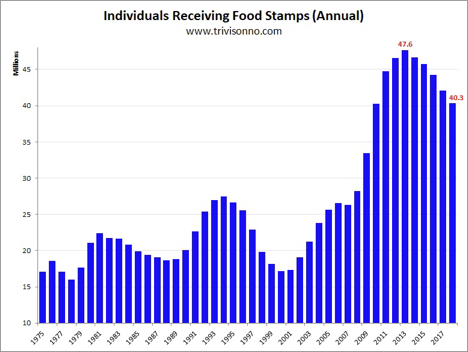 Food stamps are but one component of our public assistance safety net, though a substantial one. The program accounted for upwards of 75 percent of the last Farm Bill. That’s why I supported reforming food stamps in the House reauthorization of the bill during the previous Congress.

Unfortunately, at the insistence of liberal politicians in the Senate, sensible SNAP work requirements were inexplicably removed from the final version.

Consequently, the Trump administration announced the tightening of eligibility waivers for those states where unemployment is especially low. Asking able-bodied, childless adults on food stamps (or most transfer programs) to retrain or look for part-time work is hardly a draconian provision.

But neither is requiring citizenship as a condition of public assistance.

You’d never know it, however, by reading the “public news service” in Minnesota, where one tendentious headline read, “‘Public Charge’ Plan Continues to Stoke Fear in MN.” The piece (picked up by several news outlets where editors should know better) quoted a nonprofit executive director saying “lower-income immigrants still are nervous about being deported if they apply for [food stamp] benefits.”

A footnote then discloses the same group “contributes to our fund for reporting on Hunger/Food/Nutrition, Livable Wages/Working Families.” It further implores, “If you would like to help support news in the public interest, click here.”

Whose “public interest”? It’s certainly not taxpayers. Nor, for that matter, anyone who might have concerns about national sovereignty and illegal immigrants on welfare. I hesitate to call such hyper-partisan dissembling “journalism,” but this is surely how it dies.

Even a panel from the liberal Ninth Circuit upheld the administration’s efforts to bar those immigrants likely to become a “public charge” — a term that dates back to immigration law in the 19th century.

That has proven to be very convenient for politicians and advocacy organizations disguised as reporters teaming up to undercut the law. It was no surprise the very same executive director — when not engaged in “member-supported journalism” — was scheduled to be on hand for Minnesota Gov. Tim Walz’s annual turkey pardon proclamations.

This would be the same Walz whose virtue-signaling knows few bounds. In response to the administration’s executive order requiring states to sign off on accepting more refugee settlements, Walz declared his opposition by stating “the inn is not full”—as though no one who celebrates Christmas could oppose open borders combined with welfare benefits.

Not to be outdone, Democratic Rep. Ilhan Omar’s predecessor, now-Attorney General Keith Ellison, joined a lawsuit by organizations who get paid for resettlement activities — even going so far as to suggest local officials should not be allowed to make these decisions for their own communities.

But not all lifelong Democrats in Minnesota are so keen at undoing Clinton-style welfare reform. Probably because many still remember a much more moderate Democratic governor gracing the cover of Time Magazine a few decades ago talking about “the good life in Minnesota.”

“America first” is resonating, and that’s why President Trump has targeted the state. Trump has especially tapped into blue-collar workers in greater Minnesota fed up with urban elitists lecturing them to pay up while their party leaders promise to put their energy, mining and logging jobs on the chopping block.

Losing by just 44,000 votes in Minnesota three years ago, the campaign already has staff on the ground and is promising a heavy investment here in 2020.

The constant preening by these urban leftist is why mainstream voters across the state are looking at the 2020 election as one of the few remaining firewalls for fiscal responsibility, the rule of law and whether that “good life” stays in Minnesota.

Jason Lewis (@LewisForMN) served as a Republican representing Minnesota in Congress from 2017-19.