Democratic Minnesota Rep. Ilhan Omar on Thursday denounced allegations by a Somali individual in Minnesota who says he knows Omar married her brother, with the congresswoman suggesting that the man is being paid to make the accusations.

Abdihakim Osman — who is a member of the Somali community in Minneapolis and says he has long known Omar’s family — told the Daily Mail that she admitted to friends years ago that the second man she married was her brother, and that the marriage was conducted in order to score immigration benefits. In response, Omar suggested Osman was paid to make up the story.

“Paying people to generate fake new stories in order to delegitimize me and those I represent isn’t a good look,” Omar tweeted Thursday, following publication of the Daily Mail story. “Desperation is a sad mobilizing tool.”

Omar has long faced accusations that her second husband, Ahmed Elmi, is actually her brother. Conservative journalist David Steinberg has, since at least 2018, cited social media posts to argue that Omar and Elmi are siblings.

Traffic records, marriage certificate records and divorce records obtained by the Washington Examiner indicate Omar was living with her first husband while being legally married to Elmi, despite saying she was separated from her first husband at the time.

Evidence obtained by the Daily Caller News Foundation suggests Elmi helped Omar’s sister build a website, undermining an oath taken by Omar that she was unable to make contact with him.

Osman noted to the Daily Mail that Omar, a devout Muslim who wears a hijab, had a Christian minister conduct her 2009 wedding with Elmi.

Unlike her first wedding with Ahmed Hirsi — which was widely celebrated among the local Somali community and conducted in the Muslim tradition, her wedding with Elmi was conducted in relative secrecy by a Christian minister and registered with the state, Osman said.

Osman said locals weren’t even aware of the wedding ceremony until media unearthed the marriage certificate years afterward. Omar conducted a Christian wedding because an imam would have known the two were brothers and would’ve refused to marry them, he added.

Omar, for her part, has adamantly denied the accusations and mounting evidence, calling allegations that she married her brother “absurd and offensive.” The Democratic congresswoman has since refused to address the issue, saying she does not speak about personal matters.

Osman operates a Facebook account called Xerta Shekh, according to the Daily Mail. He denied Omar’s claim that he was paid to make the allegation, calling the congresswoman a “pathological liar” in a Facebook post Thursday.

“I am going to declare under perjury of law that I have not received one single penny from anyone to discuss Ilhan Omars [sic] issues. Ilhan Omar is a pathological liar who has lied about many people in different elections,” Osman wrote on Facebook, although it’s not clear if he has taken any sort of oath.

“Ilhan has lied to the people of America [sic] specifically the poor Somali people who trusted her to be their helper in Congress. She lied through her teeth to elderly people who stood in line for hours to vote for their dreams which they saw in her,” he continued. 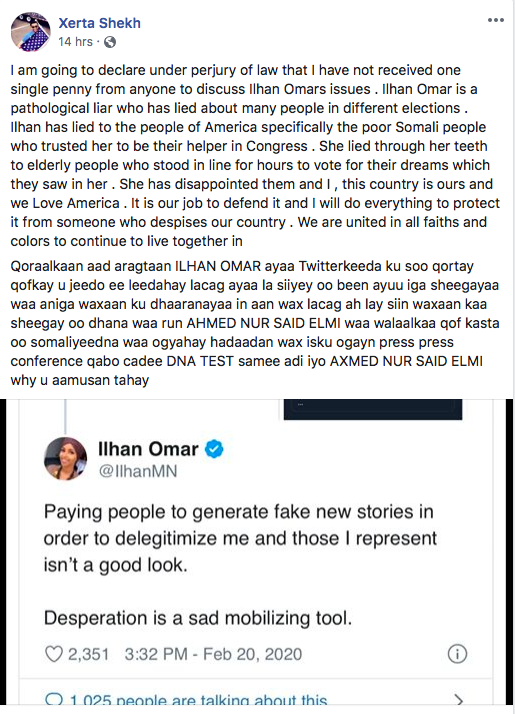 The DCNF reached out to Omar’s office about her accusation, but did not receive a response.

Osman first arrived in the United States in 2004, and said he became acquainted with Hirsi during his first few years in Minneapolis, Minnesota. The two first met when Hirsi worked at a local barber shop, and the two frequently ate at the now-closed Indian Ocean restaurant, Osman told the Daily Mail.

Osman also said he helped Hirsi when he opened up his own business, Urban Hookah, working at the till on occasion. That establishment has since closed down.

Speaking through an interpreter, Osman told the Daily Mail that, years ago, Omar told friends that she would “do what she had to do to get [Elmi] ‘papers’ to keep him in U.S.”

“She said she needed to get papers for her brother to go to school. We all thought she was just getting papers to allow him to stay in this country,” Osman said, becoming the first person to publicly come forward and say that Omar once admitted to marrying her brother. (RELATED: Ilhan Omar Continues To Dump Big Bucks Into Alleged Boyfriend’s Firm)

The accusations against Omar have been difficult to confirm because of a lack of paperwork in war-torn Somalia, her country of birth.

The New York Post reported in January that the FBI was investigating whether Omar married her brother to fraudulently score him a green card, and that any information gleaned from the investigation would be shared with Immigration and Customs Enforcement (ICE), citing a source with knowledge of the events.

Steinberg, who has been tracking the Omar saga for years, was the first to report that the congresswoman was under FBI investigation.